The suspect, 19-year old Nikolas Cruz, was a former student who had been expelled from the school for disciplinary reasons. He is being held in police custody.

The shooting took place at Marjory Stoneman Douglas High School in Parkland, about one hour north of Miami. Cruz began shooting around 2:40 pm, pulling the fire alarm so more students and teachers would be in the hallways. Police reported he had countless magazines and a powerful AR-15 rifle.

Cruz shot students inside and outside and escaped by blending in with students as they exited the school. After police identified him from school security cameras, he was caught in a nearby town a few hours later.

The official reasons for Cruz’s expulsion from the 3200 students high school have yet to be released through some students and teachers reported troubling behavior, including talking about weapons and fighting with other students.

“All he would talk about is guns, knives, and hunting,” said Joshua Charo, 16, a former classmate at the high school. “I can’t say I was shocked. From past experiences, he seemed like the kind of kid who would do something like this.” 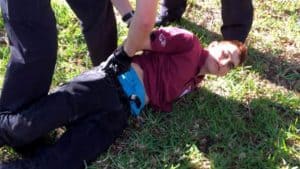 The alleged shooter being arrested in Florida shooting

Despite previous troubling behavior, county school superintendent Robert Runcie told reporters Wednesday that as of now, the police had “received no warnings, no indication” that a student had been planning an attack.

Sheriff Scott Israel announced the police are now investigating Cruz’s social media accounts, which he described as “very, very disturbing” His Instagram account (now removed) contained pictures of him holding guns and knives. A YouTube account under his name was removed after breaking the site’s rules against violent imagery.

Cruz and his younger brother had been staying with family friends since their mother died in November. Their father died when his sons were younger. He was working on his GED, taking adult education courses, and worked at a dollar store. According to the family lawyer, Jim Lewis, Cruz said he was sleeping in Wednesday because “It’s Valentine’s Day. I don’t go to school on Valentine’s Day.”

The .223 caliber, AR-15 rifle legally belonged to Cruz, and he had passed a background check, but the family he was staying with insisted he keeps it in a lockbox. The family who took him in also had a son enrolled in Marjory Stoneman Douglas High School.

The only relative who has spoken is a cousin of Cruz’s mother, Lynda, who has never met him. “I know [Lynda] had been having some issues with them, especially the older one. He was a problem. I know he did have some issues and he may have been taking medication. [He] did have some emotional difficulties,” Barbara Kumbatovich told The Washington Post.

This shooting has again brought out lawmakers insisting on better gun control. Senator Bill Lewis (D-Florida) referenced the two significant shootings that had occurred in Florida in the last couple of years, one at Pulse nightclub in Orlando and one in Fort Lauderdale airport. “We’ve been through this a lot, and each time we say enough is enough and then, of course, it isn’t enough,” he said.

More than 40 “active shooter” episodes in schools have been recorded in the United States since 2000, according to the New York Times.