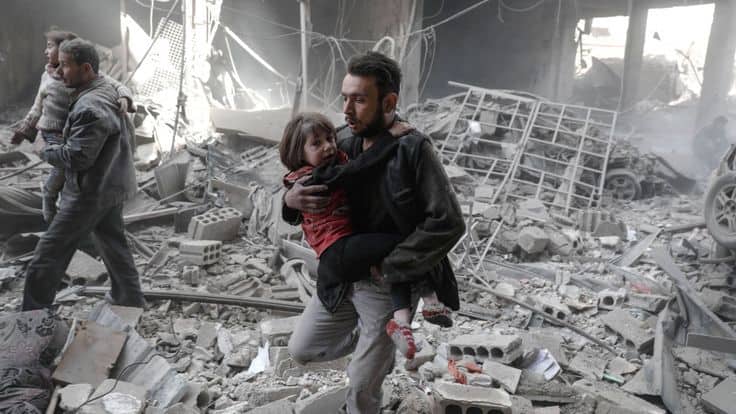 The UN Security Council today approved a resolution calling for a 30-day cease-fire across Syria so that aid workers can get food and medical attention to people in critical need in war-torn areas.

The Security Council was deadlocked for most of the week, unable to agree on the details of the ceasefire deal. Today’s vote, in the late afternoon, came after days of delays and lengthy consultations.

Russia, a strong supporter of the Syrian government, had delayed and threatened to veto an earlier version of the cease-fire resolution which it called “unfeasible.” The earlier draft had called for an immediate ceasefire, to begin within 72 hours. Russia said it could not agree to that timetable.

The current version of the draft uses much vaguer language. It does not have a specific timetable, but simply

“Demands that all parties cease hostilities without delay, and engage immediately to ensure full and comprehensive implementation of this demand by all parties, for a durable humanitarian pause for at least 30 consecutive days throughout Syria, to enable the safe, unimpeded and sustained delivery of humanitarian aid and services and medical evacuations of the critically sick and wounded, in accordance with applicable international law.”

It is not clear how, exactly, this ceasefire will be enforced. And in fact, the Russian ambassador warned, today, that Russia will not tolerate the use of military action to enforce a ceasefire.

The US ambassador, Nikki Haley, was sharply critical of Russia for delaying the ceasefire. “In the 3 days, it took us to adopt this resolution, how many mothers lost their children?” Haley asked, adding, “Syrian people should not have to die to wait for Russia to organize their instructions from Moscow. There’s no good reason we should have done this Wednesday, or Thursday, or Friday.”

Sweden and Kuwait, the Security Council members charged with addressing the humanitarian crisis in Syria, introduced the ceasefire resolution in response to ongoing bombings in the eastern Ghouta section of Damascus. The resolution also says that urgent humanitarian aid is needed by over 13 million Syrians

Kuwait’s ambassador to the UN, Mansour al-Otaiba, warned that this resolution alone won’t end the humanitarian suffering in Syria. But he called the resolution a positive sign, arguing that “it is a positive sign sent by the Security Council, a sign that the Council is united and shows solidarity to stop the humanitarian suffering and stop hostilities immediately.” He said the next step is to “implement the resolution to save the lives of the Syrian people and deliver humanitarian aid.”

The resolution calls on all parties in Syria to lift the siege on areas including eastern Ghouta, Yarmouk, Foua, and Kefraya.