Nigeria: Pressure mounts on Buhari as over 100 girls kidnapped in Yobe state 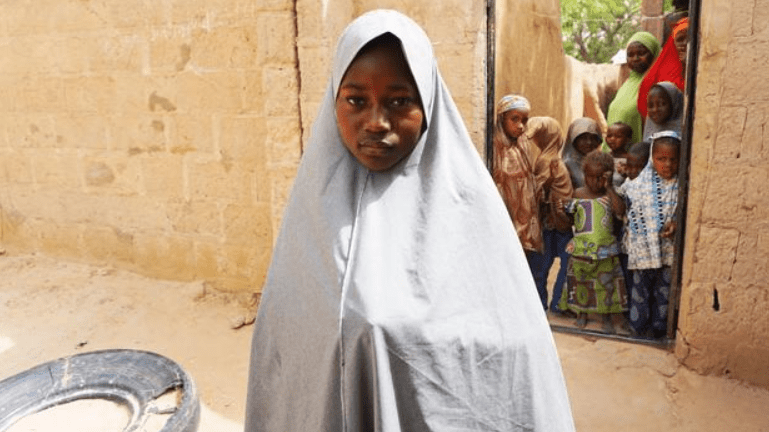 Hassana Mohammed, 13, who scaled a fence to escape an alleged Boko Haram attack on her Government Girls Science and Technical College (via CBS News)

The incident, which has thrown the country into a serious panic of a resurgence, has put citizens in doubt on whether insurgency has really been defeated as claimed by Buhari’s government.

According to reports, the girls were abducted during their moves to escape from the gunmen that had earlier attacked their school.

The girls were said to have run into the bush after the attack.

The development which is currently generating reactions in the country has led to the creation of a support group, similar to when Chibok issue occurred in 2014.

Apparently worried over the situation, parents of the kidnapped girls formed a group to combat the situation.

The head of the group whose daughter was also a victim of the kidnap, Bashir Manzo, said they had already compiled the list of the missing girls which is 105 in total.

He added that the parents of the missing girls have already sought to meet the governor of the state, Ibrahim Gaidam, over the issue.

He added that “We believe he (Gaidam) was misinformed about the rescue of 48 of the girls. The school authorities from the beginning denied and kept denying that our daughters were taken.

“We will see the governor and seek his help, as well as anyone who matters that can in one way or another assist in ensuring the freedom of our girls.”

We are yet to see our girls – teacher

Against the claim by Nigerian military that 48 of the girls have been recovered, teachers from the school have said the girls are yet to be recovered.

One of the teachers of the abducted students who didn’t want to be named said the missing students could not be accounted for when the school did a roll call.

“After the roll call, 610 out the total number of 704 students have returned. We are still searching for the remaining 94 students. We cannot say [if they have been abducted], because the insurgents went into the students’ hostel, and many of these students scaled the fence and escaped into the bushes. No one can tell if they were abducted or not. We are calling on parents to help the school update its list by reporting immediately their children arrived home safely”, he said.

Parents evacuate children from the school

The development had led the parents of the school to start evacuating their children, noting that they cannot leave their children to be abducted by terrorists.

One of the parents who spoke to newsmen said that taking away his daughter was simply for safety sake. Mr Babagana Gujba, said “I have decided to take away my daughter because of her safety. “I cannot risk my daughter for anybody. She will not return to this school until adequate security measures are put in place.”

Another parent, Mrs. Yahaya Danjuma said “For now, my daughter will be with me at home. That is where I can believe she will have adequate security. I don’t have more than her alone.”

Following a statement that some of the abducted girls have been recovered, Governor Ibrahim Gaidam of Yobe state faulted Nigerian army.

The governor said, contrary to the claim, that no girl has been rescued yet.

The military has earlier claimed that 48 of the girls have been rescued.

The governor said the military had made him misinformed the public with their elusive claim.

A statement signed by Abdullahi Bego, the director general, press affairs to Governor Ibrahim Gaidam, had earlier claimed that some of the girls were rescued and were then in the custody of the Nigerian Army. The statement read: “The Yobe State Government hereby informs the public that some of the girls at Government Girls Science Technical College (GGSTC) whose school was attacked by Boko Haram terrorists last Monday have been rescued by gallant officers and men of the Nigerian Army from the terrorists who abducted them–The rescued girls are now in the custody of the Nigerian Army. We will provide more details about their number and condition in due course–His Excellency, Governor Ibrahim Gaidam, who is very grateful for the gallantry and hard work of the officers and men of the Nigerian Army involved in the operation, is monitoring the situation closely and will make a statement in due course.”

The governor who was furious about the military action also apologized to the parents of the missing students.

Gaidam faulted the claim that the Nigerian army rescued some of the girls. He said, In fact, that none of the abducted girls has been rescued.

A Dapchi resident, Abdul Dapchi, whose two sisters were among the abducted girls, lamented to newsmen that the community became infuriated at Governor Gaidam after his confession that no girl was actually rescued. He said: “We were all angry. How could they have deceived us all along?”

The governor is said to have pleaded with the affected family members and the people of the community to keep praying to God for the release of their daughters.

President Muhammadu Buhari on his part has apologized to the families of the missing girls.

The president in a statement made available to our correspondent by his Senior Special Assistant on Media and Publicity, Garba Shehu said he was sorry about the attack which led to the abduction of the students from the Government Girls Technical College, Dapchi, Yobe State.

He described the incident as a national disaster.

The president said he felt the pain of the missing children families, adding that efforts will be enforced to recover them in no time.

According to him, “When I received the devastating news of the attack on the school and the fact that the local authorities could not account for all the students, I immediately dispatched a high-level delegation on a fact-finding visit to the town.

“I also instructed the security agencies to deploy in full and not spare any effort to ensure that all the girls are returned safely, and the attackers arrested and made to face justice.

“The entire country stands as one with the girls’ families, the government and the people of Yobe State.

“This is a national disaster. We are sorry that this could have happened and (we) share your pain. We pray that our gallant armed forces will locate and safely return your missing family members.

“Our government is sending more troops and surveillance aircraft to keep an eye on all movements in the entire territory on a 24-hour basis, in the hope that all the missing girls will be found.”

The major opposition party in the country, Peoples Democratic Party, asked Nigerians to hold President Buhari responsible for the abduction.

It maintained that presidency should be held liable for various atrocities against the citizens.

In a statement made available to our correspondent, the spokesperson of the party, Mr. Kola Ologbondiyan, accused “the Presidency of putting Nigerians at risk by allegedly deceiving the people and issuing what he described as false performance indices, suggesting that insurgents had been completely routed.”

“Without a doubt, if the incompetent All Progressives Congress-led government had not dished out lies to the people in a bid to score cheap political points for its 2019 re-election bid, more precautionary measures would have been adopted by the affected communities to ensure adequate protection.

“While Nigerians are appalled by the APC’s recourse to false indices in critical sectors, it is, however, to say the least, an inexcusable height of wickedness to give a vulnerable people a false assurance of security when they are actually in danger.

“Furthermore, the PDP decries as iniquitous, the efforts by the APC-controlled federal authorities to suppress information on the abduction, leading to conflicting reports and frustrating of the rescue mission, just because they seek to hide the failures of the Presidency in ensuring the safety of Nigerians, particularly in the North.

“We were shocked that in their proclivity to deceive, the authorities earlier informed Nigerians that some of the girls had been recovered only for the news to turn out to be false.”

Ologbondiyan also said in the statement that Federal Government’s team, headed by the Minister of Information and Culture, Alhaji Lai Mohammed, made no effort to commiserate with the community leaders and parents of the abducted girls.

“Under the PDP, Nigerians were never told lies on the true situation of the state of affairs in all sectors, particularly security. The PDP-led government constantly briefed Nigerians and carried all stakeholders along in our concerted effort in securing lives and property in our nation,” he added.

Ologbondiyan asked Nigerians to hold the Presidency and the APC-led Federal Government directly “responsible for the abduction of these defenceless schoolgirls as well as the killings in our country today.”

Leaders of the Bring Back Our Girls group, Dr. Oby Ezekwesili, and Aisha Yesufu, have blamed the Federal Government over the missing girls. They maintained that the government has failed in its actions.

Ezekwesili in a tweet on Friday, said, “Devastated, exhausted and yet, we shall stand and fight for justice of the rescue of our Dapchi girls by the government of President Muhammadu Buhari. Not even our remaining 112 Chibok schoolgirls would imagine any more daughters of Nigeria would be failed again.

“That the tragedy of the Dapchi girls and its handling entirely repeat the pattern of the Chibok schoolgirls’ abduction nearly four years ago (under a different Federal Government ) shows how our leaders seldom learn any lessons from failure.”

Meanwhile, Yesufu, on her Twitter page maintained that “Reading this (abduction of Yobe schoolgirls) is just painful. While terrorists were regrouping, our military was busy handing over a flag to the President and declaring technical defeat. Find the girls. Bring them to their parents and that’s all. They don’t want publicity. They want their children.

“For some, Dapchi (abduction) is an opportunity to score political points; to be able to say the government is working or not working. Can you stop for a moment and imagine when you were in secondary school and you were abducted? What would have mattered most to you and your family?

“How can Lai Mohammed be talking about the government’s image when people’s daughters have been abducted and only God knows what they are going through? A government that fails in its responsibility to protect the lives and properties of its citizens is no longer fit to be called a government. February 25 of this year would be the fourth year memorial of Buni Yadi boys slaughtered by the Boko Haram in their school in Yobe State. We learned nothing?”

Troops will not rest until girls are recovered – Military

He said “The military would continue with their rescue operation. The troops are there already, the GOC was there and whatever needs to be done is being done in the area.”