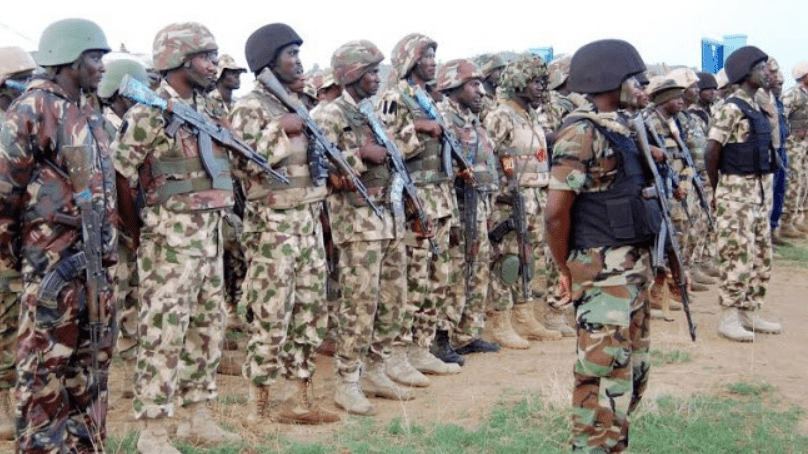 A fact has emerged on how a troop of Nigeria’s army compromised the safety of over 100 Dapchi girls who were abducted in Yobe state.

A document that proved the deed of the military which led to the abduction of the innocent girls was made available to our correspondent. 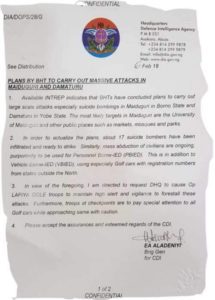 According to the document, the Defense Headquarters was informed by Defense Intelligent Agency (DIA) about the plans of Boko Haram members to carry out a massive attack in February.

In the military memo that was dated February 6, 2018, with title “Plans By BHT To Carry Out Massive Attacks In Maiduguri And Damaturu” and signed by one Brigadier-General EA Adeniyi, it was stated that findings have revealed that Boko Haram was planning to attack the University of Maiduguri, mosques, markets, and parks in Borno state.

The document further explained that Boko Haram strategists have hired no less than 17 suicide bombers to be used for the operation.

The document precisely warned that the deadly group was about to carry out a mass abduction.

The statement also affirmed that “Vehicle-Borne Improvised Explosive Device will be used with Golf cars with registration numbers from states of the North”.

But against this huge warning, the military men disregarded the information and withdrawn troops from Dapchi in Yobe state, where the girls were abducted.

The development made the military to face a lot of condemnations from the public members who said they knew about the girls’ abduction.

According to them, the military should be probed on their action.

Mr. Rahman Olayinka, a public affairs analyst said “The military should be probed on the case. They appeared to have known about the operation of the Boko Haram members when they withdraw the troop so that they can have their ways”.

He also made reference to the military action that led to the abduction of Chibok girls in 2014.

Human rights activist, Mr. Dandy Eze said, “The military action was suspicious. Does that mean we have some of the military members working for Boko Haram? The commander of armed forces should sanction the military heads”.

Meanwhile, the Deputy Director (Public Relations), the Theatre Command, Colonel Onyema Nwachukwu in a statement, said the military should not be blamed for the latest round of horror, as troops handed a peaceful and calm situation to the Police.

But the Nigerian police in response denied the claim; maintain that the military claim is far from the truth.