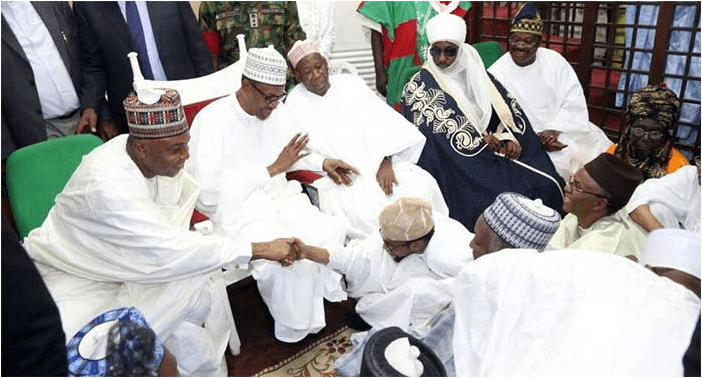 Nigerians have begun to criticize President Muhammadu Buhari alongside 22 governors over what they described as unpatriotic display over the weekend.

The citizens condemned the president and his governors on their decision to grace a wedding ceremony of Oyo state and Kano state governors while they neglect to visit the family of 110 abducted Dapchi girls in Yobe state.

It was also learned that the president is yet to visit other places in the country where havoc recently wreaked such as Zamfara, Benue state where several citizens were massacred by Fulani herdsmen early this year.

Leading among the citizens that condemned the president was his running mate in 2011 presidential election, Mr. Tunde Bakare, who is the serving overseer of the Latter Rain Assembly.

According to Bakare, he could not comprehend what President Muhammadu Buhari and 22 state governors were doing at the Kano wedding, while 110 Dapchi schoolgirls are still in captivity.

On Saturday, no fewer than 22 governors converged on Kano, to celebrate the wedding of Idris Ajimobi and Fatima Ganduje, offsprings of Abiola Ajimobi, and Ibrahim Ganduje, governors of Oyo and Kano states, respectively.

Also in attendance was the president, and high-ranking members of the All Progressives Congress (APC), including Bola Tinubu, former governor of Lagos state.

Bakare argued that the wedding, which came two days after Boko Haram killed some UN aid workers in Rann, and two weeks after the abduction of the Dapchi school girls in Yobe, showed the insensitivity of Nigerian leaders, especially the president.

“Forgive my ill-mannerism, but I could not comprehend why a governor will celebrate the wedding of his daughter, and another governor of his son, on the front pages of newspapers, flashing it before our eyes, when other peoples’ daughters are in captivity,” Bakare said.

“If any of them had lost a daughter in that captivity, would they celebrate that way? I know the Bible says to rejoice with them that rejoice, but I do not know what the president of Nigeria was doing there.

“And somebody came to say, let me explain to you, it is Islamic tradition, before this time, about January, they had agreed, that he (Buhari) will be the one to give the bride away and (Bola) Tinubu will be the one to pay the dowry and present the son, and they agreed long before now. I looked at him and said the president of Nigeria wanted to come to my daughter’s wedding, and I said to him, sir, don’t come. That is beneath your office. Face the work of the state and keep serving.”

He also lambasted the governors on the wedding attendance.

“And 22 governors showed up to mark register when 110 daughters of citizens of your nation were captured by Boko Haram that you said you have already technically defeated?–It just shows how insensitive our leaders are. We have gotten to a stage that our president has become a king and a monarch. That his son who rode his pleasurable bike that almost claimed his life, will be returning from an overseas trip, where he had received special healthcare that Nigerians cannot afford, that it took a whole minister of state to go and welcome him, because he has no job.”

Bakare also express worry over the huge amount of debt Buhari’s government has incurred for the country compare to PDP’s 16 years reign.

According to him, the president should be more concerned about the tragedies unfolding in different parts of Nigeria, especially in the North.

“I’m of the opinion that President Buhari should visit Dapchi where 110 school girls were abducted by Boko Haram,.Kano is not far from Yobe State. The other time, he was in Nasarawa State, but didn’t visit its next door neighbour, Benue where over 70 people were killed by herdsmen.”

Senator Shehu Sani, in his reaction said the critics on the president were purposely for him to bear the country in mind than before.

Sani who wrote on his social media said: “Those telling the President to visit Dapchi, Taraba, Rann and Benue are not enemies of the President, they are people who want him to be in the right place at the right time as our leader, as a human being, as a father; for history and for morality. Right on stage, the Brooms band and the Gang are wrongly playing Rock music for the King instead of a Dirge. History has no record of people who only whisper the truth to power because it’s inaudible and cannot be verified.”

Meanwhile, the special adviser to the president on media and publicity, Mr. Femi Adesina, has said the President was ready to visit places where havocs were wreaked on the citizens.

According to Adesina’s statement that was made available to our correspondent, it read that “ In view of recent terrorist attacks, criminal activities and communal clashes in some states leading to tragic loss of lives and kidnapping of 110 schoolgirls, President Muhammadu Buhari immediately tasked the Armed Forces and other Security agencies to compile comprehensive reports on the various incidents.”

Having received and studied the reports, the President has decided to undertake an on the spot assessment of the various occurrences and to meet and console the communities affected.

From today, March 5, he will visit Taraba, and subsequently Benue, Yobe, Zamfara and Rivers States.

The President calls on all Nigerians especially those in the affected areas to cooperate fully with the security agencies to enable them to curb the spate of crimes, bring those responsible to justice and prevent further occurrence, the statement read.