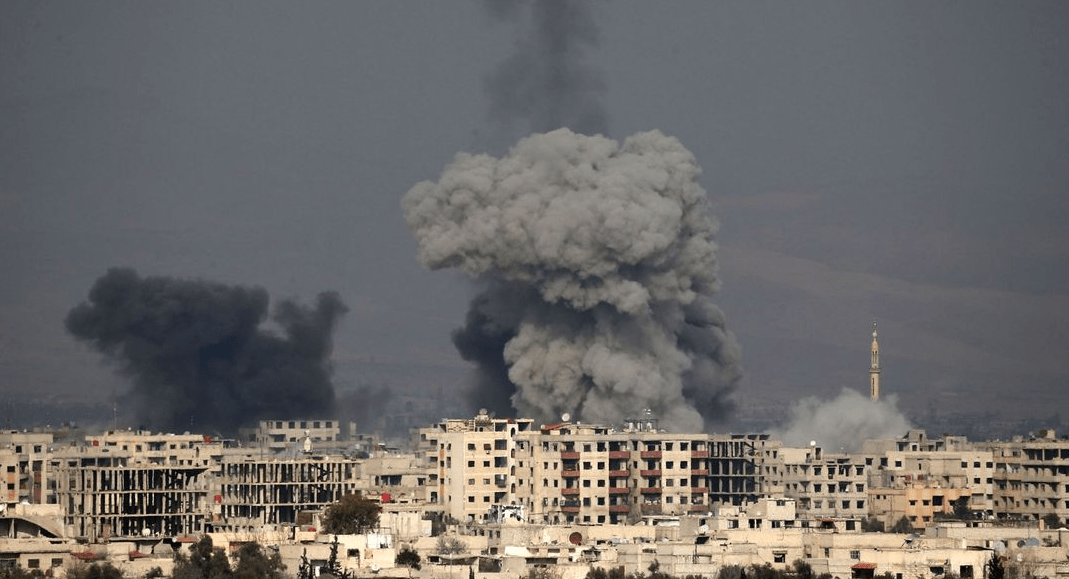 Airstrike in Ghouta (via SkyNews)

The seven-year conflict has claimed the lives of an estimated half a million people, causing the worst refugee crisis since WWII, and dismantling so many cities’ infrastructure the cost to rebuild has been estimated to be in the range of $US200 billion. What began as simple street protests turned into a civil war – now a war involving a dozen or more nations, hundreds of armed groups, and four main sides.

In a series of pro-democracy protests in 2011, the Arab Spring shook countries across the Middle East. In Syria, people peacefully protested in the streets after President Bashar Assad’s government arrested and tortured teenagers for writing pro-revolution graffiti on a school wall. The Syrian Army has now captured over two-thirds of eastern Ghouta. With some 12,500 people evacuated the town into government-held territory, Thursday’s exodus marks the largest movement of civilians from Eastern Ghouta since it came under government siege in 2013. Syrian state television aired thousands of civilians carrying bags filled with clothes as they fled Hammuriyeh and Jisreen, hours after the two towns were captured by government forces. A child sleeping in a suitcase splashed across media outlets highlighting the crisis. 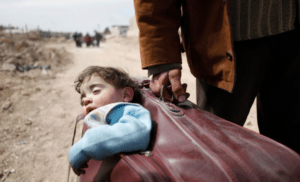 One of the seven-year-old war’s largest battles, the exodus a likely turning point in eastern Ghouta. The United Nations estimated 400,000 people under siege in eastern Ghouta, the last large stronghold near Damascus, with sparse access to food or medicine. The Syrian government and its Russian allies have laden the area with airstrikes since mid-February and launched a ground assault seizing much of the territory since last week, even so much as sequestering towns off from each other. Despite the U.N. Security Council’s demand for a ceasefire, fighting has ravaged on as Moscow and Damascus argue the enemies they target are members of terrorist groups unprotected by the truce. They say rebels are preventing civilians from escaping the city. According to Reuters, the rebels deny this and say most residents are now fleeing because of the government’s bombs falling on Ghouta. 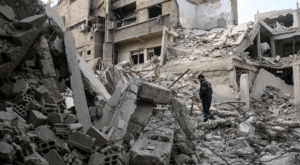 Monitors of the conflict, UK-based Syrian Observatory for Human Rights; at least 12,500 people left toward government territory. “Every hour, over 800 people are leaving,” Russia’s RIA news agency cited Major General Vladimir Zolotukhin as saying. Moscow has offered safe passage out to rebel fighters willing to surrender the territory, a move helping Damascus and its allies regain control over major cities in western Syria. The opposition says that amounts to forced displacement.

According to the Guardian, in efforts to quell protests, government forces started opening fire during marches and sit-ins. With hundreds of people now killed by Assad’s government, the protesters who initially called for more civil liberties started demanding a total overthrow of Assad’s regime. With no end to the violence, few former government officers formed the Free Syrian Army to support the opposition. Other armed groups with various ideologies and loyalties would also be created. As sides battled for control over major cities such as Homs and Aleppo, the fighting escalated into a full-blown civil war by the end of 2011. 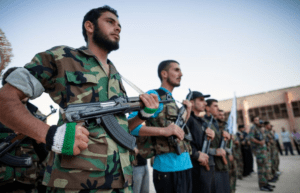 Then Assad’s government began using heavy artillery and barrel bombs — barrels filled with explosives and materials like shrapnel and nails — dropping them from helicopters, which led to even more deaths in both rural and urban regions.

By 2017, over 450,000 Syrians had been killed during the war. “The level of human suffering that I am witnessing with the Syria crisis is indeed without a parallel,” said UN High Commissioner Antonio Guterres. Years of fighting also fuelled the rise of Islamic extremists like ISIS and al-Qaeda affiliate Jabhat al-Nusra, who capitalized on the turmoil by taking over large sections of Syria and Iraq.

As fighting continued to devastate the Middle Eastern nation, the conflict escalated into a proxy war between the US, Russia, and Iran. While the U.S. decried Assad’s government and supported “moderate” rebel groups fighting the regime, Russian airstrikes and Iran-backed militias bolstered Assad’s army.

With Russia arming Assad’s government, fighting for major cities like Palmyra and Aleppo continued into 2017. Six years of unabated bombing and fighting caused irreparable damage to Syrian infrastructure and society.

Syrian national monuments before the war versus now

U.S. President Donald Trump launched cruise missiles at the airfield where Assad’s warplanes were to have taken offloaded with chemical weapons. It was the first U.S. attack on the Syrian government since the war erupted in 2011. On February 7, 2018, up to 200 “pro-regime forces,” reportedly Russian mercenaries, were killed in US airstrikes after they attacked US-backed Kurdish forces and their American advisors across the Euphrates River

The Civil War has spurred the biggest global refugee crisis since World War II. Nearly half of Syria’s pre-war population has been internally displaced or forced to flee their homes for other countries in the Middle East, Europe, and North America.