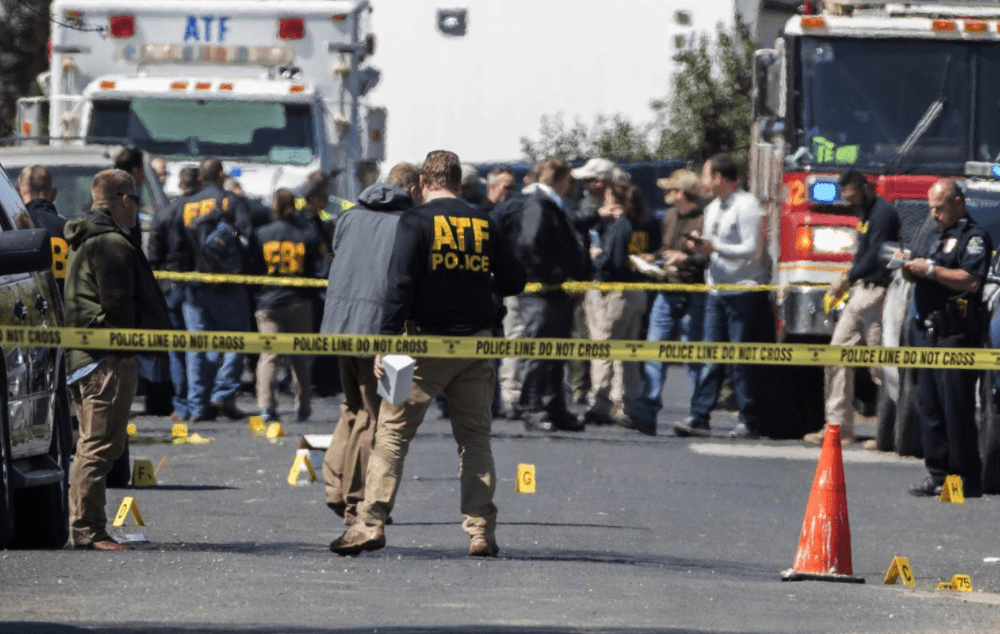 Austin Police Chief Brian Manley said Mark Anthony Conditt, the suspect alleged to have carried out a string of bombings across the Austin, Texas area, is dead. Conditt, a 23-year-old, white male detonated a device in his vehicle after being pursued by the Austin SWAT team early Wednesday morning.

Over the last 24 to 36 hours, tips on the suspect poured in and when investigators were confident who he was — surveillance teams began looking for him. The vehicle he was known to be driving was spotted at a hotel in the Austin suburb of Round Rock, Manley said.

As police and federal positioned around the hotel, the suspect began driving away and law enforcement followed. The vehicle then stopped in a ditch on the side of a road.As the Austin police SWAT team closed in, the suspect fired at them, then detonated a device in his vehicle. One SWAT team member was knocked back from the blast as he approached the vehicle and suffered minor injuries, Manley said.
Authorities believe the suspect was behind all the bombings in Austin this month.

“We are concerned that there may be other packages that are still out there,” FBI agent Chris Combs, head of the bureaus San Antonio office said.

People in Austin are being urged to remain vigilant since it’s not known if any other devices were planted. Authorities believe the suspect built all of all the devices himself, however, no associates have been identified.

The Mayor of Austin, Steve Adler (D) told CNN the investigation is not over as many unanswered questions remain. According to Adler, no other devices have been reported at this time. “I think the community is feeling a considerable amount of relief,” he said. Authorities added it was unclear whether the suspect intended to plant the device he used to kill himself.

Photos of the suspect, captured from video surveillance show the suspect dropping off two suspicious packages Sunday, both were connected to the string of explosions in the Texas capital.

The U.S. Marshal’s Lone Star Fugitive Task Force – Austin Division – gathered the video and helped lead agencies in the investigation to gain understanding to where the person of interest might have been located.
Surveillance videos were taken inside a South Austin FedEx Office store, where the person shipped the two packages provided images of the suspect.

Emergency dispatch audio posted by Broadcastify.com described the bomb.
“There were nails and metals in the bomb. Package was going to Austin,” a dispatcher can be heard saying.
Agents from the FBI and Bureau of Alcohol, Tobacco, Firearms, and Explosives (ATF) who were working 60 miles away in Austin hurriedly arrived to investigate.

“A package had been traveling along the automated conveyer when it had exploded,” Schertz Police Chief Michael Hanson said. The second package was intercepted at a facility near the Austin airport.
According to Congressman Lloyd Doggett’s office, the second suspicious package was being treated as if it could be a bomb; both packages reportedly originated from the same location.

Images show the person, possibly wearing a wig and gloves, carrying two packages. According to time stamps on the pictures, the person was in the store around 7:30 p.m. Sunday evening.

Authorities believe the same person or persons were connected to the two packages that surfaced Tuesday and were also responsible for the four other explosions that began on March 2nd that killed two people and injured six.
A sixth unrelated explosion was reported Tuesday evening in South Austin, but Austin Police said it was from military memorabilia left at a Goodwill drop box.

“Bomb makers have a signature in their device where you will find commonalities between multiple devices that they’ve built,” Sherrow said. “So we look for those signatures and similarities.”