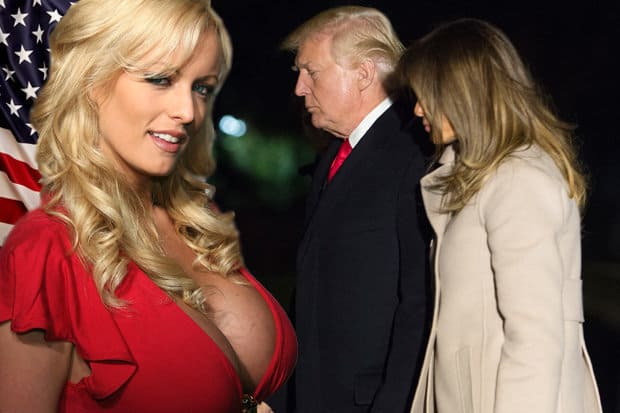 In the first interview since her alleged 2006 affair with Donald Trump, Stephanie Clifford (Stormy Daniels) said she was physically threatened. Clifford told 60 Minutes’ Anderson Cooper, “I was in a parking lot, going to a fitness class with my infant daughter. And a guy walked up to me and said to me, Leave Trump alone. And then he leaned around and looked at my daughter and said, “That’s a beautiful little girl. It’d be a shame if something happened to her mom.

She considered this a direct threat and said, “I was rattled. I remember going into the workout class. And my hands are shaking so much; I was afraid I was gonna– drop her (her infant daughter).”

Clifford received a $130,000 payment and signed a Non-Disclosure Agreement to keep the relationship under wraps. She denied the affair at least three times. She told Cooper she took those actions to ensure the physical safety of her family and protect them from much of the public scrutiny she’s currently experiencing.

Just before the 2016 Presidential election, Clifford was offered significantly more money for her story by media outlets. She told Cooper that choosing Michael Cohen’s deal (Mr. Trump’s personal attorney) corroborates that narrative. “I think the fact that I didn’t even negotiate, I just quickly said yes to this very, you know, strict contract. And what most people will agree with me extremely low number. It’s all the proof I need.”

Cliffords sued President Trump in Los Angeles Superior Court earlier this month. The suit alleges that a Non Disclosure agreement she signed just days before the 2016 election is invalid. Mr. Trump never signed the contract. The document has a blank line for the (then) candidate’s signature.

The lawsuit further purports Cliffords “sought to share details concerning her relationship and encounters with Mr. Trump with various news outlets” just after the Access Hollywood Tape was released and then Candidate Donald Trump and his attorney Michael Cohen attempted to silence her to “avoid telling the truth, thus helping to ensure he won the Presidential election.”

Stephanie Clifford’s attorney, Michael Avenatti asserts the agreement is unenforceable and believes she is free to speak publicly about the affair.

In a subsequent interview, Avenatti told Anderson Cooper, “ This is about the cover-up. This is about the extent that Mr. Cohen and the president have gone to intimidate this woman, to silence her, to threaten her, and to put her under their thumb. It is thuggish behavior from people in power.”

In a tweet earlier this week Avenatti posted a picture of a CD/DVD. The tweet suggests evidence of the relationship between Trump and Clifford. When asked about the evidence Ms. Clifford declined to comment. Cooper pressed the issue with Mr. Avenatti suggesting he might be bluffing. Avenatti said, “You should ask some of the other people in my career when they’ve bet on me bluffing.”

In addition to the civil litigation previously established facts could result in legal challenges for Michael Cohen and the President.

Trevor Potter, former Chairman of the Federal Election Commission and author of The New Campaign Finance Sourcebook, told Cooper, “The payment of the money just creates an enormous legal mess for I think Trump, for Cohen and anyone else who was involved in this in the campaign.”

Potter suggests the $130,000 payment made to Clifford is an in-kind contribution by Mr. Cohen to the Trump Campaign. The maximum, allowable campaign contribution is $3500.

Potter believes if Trump personally paid the contribution back to Cohen it might mitigate legal exposure. On the other hand, it would also be an admission by the President that the affair took place. It would also corroborate that he paid for Clifford’s silence.