Nigeria: APC in disarray ahead of 2019 as Buhari disagree with party’s NEC 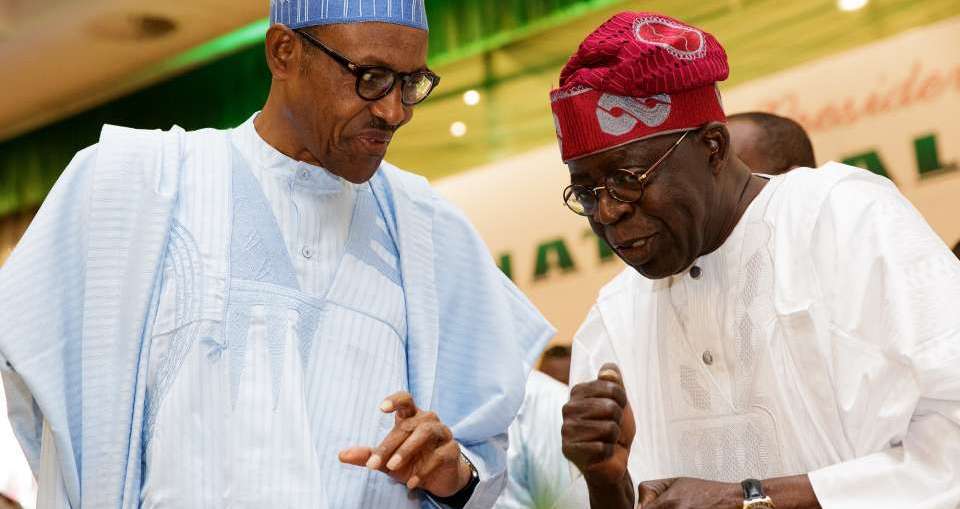 More catastrophes appeared to have befallen upon Nigeria’s ruling party, All Progressive Congress, as the party keeps drowning in different quagmires daily.

In the latest challenges which the party is currently battling to save itself, the party’s National Working Committee is in an entanglement with President Muhammadu Buhari over the recent the elongation of the party’s chair tenure, John Oyegun.

A senior member of the party also a former governor of Lagos state, Bola Tinubu, had raised alarm before the tenure of the party’s chair and other executive members’ tenure was elongated. He said the move may enmesh the party in turbulence ahead of the coming general election.

But, in a power play game which later favoured John Oyegun and others, the outcry by Tinubu was snubbed with a year tenure elongation bestowed upon them.

The development, which didn’t go well with some aggrieved members of the party, has since led to internal fractures and activities against the goals of the party by some stalwarts.

President Buhari, in what appeared to be a move to pitch tent with Tinubu over the issues and others in the party, asked the national executive committee (NEC) of the All Progressives Congress (APC) to consider reversing the tenure extension of the party’s national working committee (NWC) led by John Oyegun, chairman of the party.

The president said the extension, which was decided upon at the party’s NEC meeting on February 27, is against the constitution of the APC.

He maintained that he would like to do away with activities that could jeopardize the party’s unity ahead of 2019 general election.

“In particular, I think it is important to talk about the contentious issues of the tenure of our national and state executive officers. As we all know, the motion was moved at the last NEC meeting February 27, 2018, to the effect that when the tenure of the current executive expires in June this year, they should be allowed to continue for one year. This motion was moved by the majority of members present at the last NEC meeting. Even though some of our party members have since spoken very vehemently against it, others have even taken the matter to court,” he said.

He added that “On my own part, I have taken some time to review and seek advice on the resolution and what I have found is that it contravenes our party constitution and the constitution of the Federal Republic of Nigeria. While the APC constitution article 17, in bracket 1 and 13 on two bracket b, limits the tenure of elected officers to four years, renewable once by another election. The 1999 constitution of Nigeria as amended, in section 223, also prescribes periodic election for party executives at regular intervals which must not exceed four years.”

He also explained that “Furthermore, article 31 of our party constitution provides that any principal officer wishing to re-contest or contest for another election must resign from his current post at least one month before the election. In this circumstance, what is expected of us is to conduct fresh election once the tenure of the current executives approaches its end. The caretaker committee cannot remedy the situation and cannot currently act in place of an elected officer. Furthermore, I think if we the constitutional provisions we might be endangering the fortunes of our party.

“If the tenure of our party executive can be legally faulted then it means that any nomination and primary election can also be faulted. This is not to talk of the issues that will arise and is already arising within the party when some of our members felt that they are being denied the right to aspire to executive positions, internal democracy is not explained within the party.

“I am therefore of the firm belief that it is better to follow strictly the dictates of our party and national constitution rather than put APC and its activities at grave risk.

“Fortunately, we have already approved a timetable for the holding of congresses and elections. I think this should be allowed to go forward and all efforts should now be geared towards making them a great success.”

The former governor of Adamawa state, Murtala Nyako, said the decision of the party’s NEC could berate the party ahead of the coming general election in 2019.

“If there is no convention in APC before the general election, the party may become a spectator instead of a participant,” Nyako insisted.

Meanwhile, the National leader of the party, Bola Tinubu, has welcomed the position of the president over the development.

In a statement made available to our correspondent, Tinubu maintained that It “ the President Buhari stated that talk of extension or elongation of the tenures of national and state party executive officers was improper.

“The President declared that any such moves would contravene both the national and party constitutions.

“Additionally, he stated that the designation of existing officers as caretaker committees also violated constitutional requirements.

Tinubu added that “President Buhari’s action saves the party from serious legal turmoil. If the elongations were deemed illegal then all subsequent party actions, including the nomination of all of our candidates for elective offices, might also be of questionable legality. Such a predicament would constitute an unnecessary and mortal blow to the party and its role in promoting progressive governance to Nigeria.

“Moreover, President Buhari has affirmed for all to see that our party is one based on the rule of law coupled with a firm adherence to internal democracy.

“While it would have been easy to allow the ill-conceived motion of 27 February to stand, President Buhari showed principle and courage by steering the party back to its original and correct path.

“The President has spoken. Today is a good day for those who cherish democracy and legality.

“His action will also serve to strengthen the party by allowing party members, including present incumbents, to seek to contribute to the party by vying for executive offices as they see fit.

“His action will go far in advancing the process of internal reconciliation that is now underway.

“It is a time for the party to move forward and begin to plan and organize the needed congresses according to the existing timetables.

“After all, a party bearing the name All Progressives Congress should be the last party to resist holding congresses in which all its people have a fair say and fair chance to aspire to any position in the party for which they are qualified to hold.

“Again, this is a good day for the APC and democratic political practice in Nigeria. We shun the politics of old to move toward a new and better way of governing ourselves and this nation.”

The National Publicity Secretary of APC Mallam Bolaji Abdullahi said comment made by the president was a mere personal opinion.