Interview: Why Nigeria is yet to be truly united – Atiku Abubakar 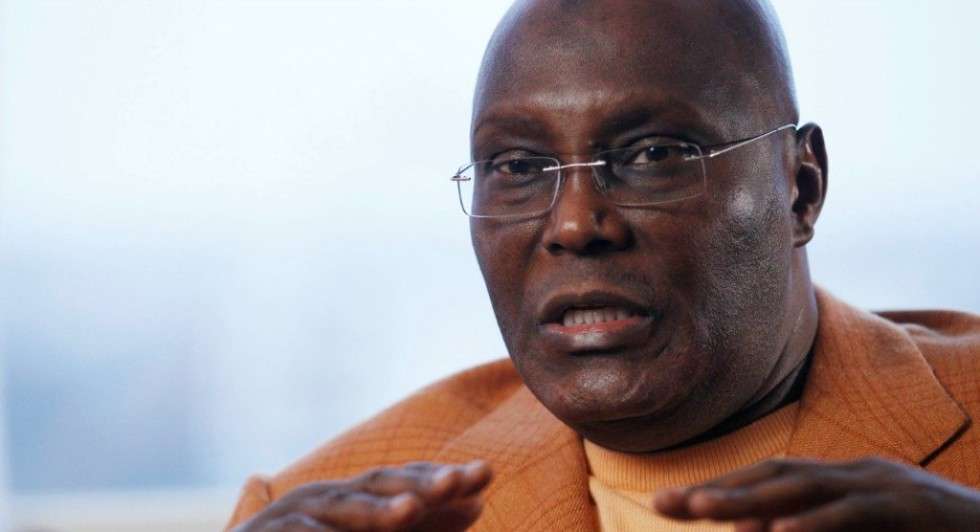 In this interview, former Nigerian Vice President, Atiku Abubakar, said Nigeria would not truly unite until it is reconstructed. He also spoke on other sundry issues amongst which is his reason for defecting back to PDP.

Many Nigerians thought you were going to contest the presidential primaries under the APC platform with president Buhari and others? Why did you leave APC for PDP?

I am a man who believes so much in the process. The law of process is one of the most vital laws of leadership. Rejoining the Peoples Democratic Party is a process. Worthwhile processes happen over time; they do not happen overnight. You must remember that unlike the APC, the PDP is a party governed by processes. And then on a broader scale, there are other processes that are controlled by the Independent National Electoral Commission. I understand that standards have slipped in the last few years and people expect ad-hoc behavior from the political class. But I come from a tradition of discipline.

I had a Facebook live video interface with Nigerians where I announced my resignation from the APC on November 24, 2017. The leadership of the PDP in the North-East geopolitical zone paid a solidarity visit to me on December 3, 2017. I visited the PDP national headquarters on December 5, 2017, where I was received by the party’s caretaker committee including the then caretaker Chairman, Senator Ahmed Makarfi. I was a participant and major speaker at the December 9, 2017, convention of the PDP. Thereafter, I began national consultations. I was in Ekiti State to confer with the Chairman of the PDP Governors Forum, Governor Ayo Fayose, on January 25, 2018. Between February 1 and 2, 2018, I attended the funeral of Dr. Alex Ekwueme and was energized by the legacy of that great man and fellow founding father of the PDP. Let me add that politics is not about delivering activity. It is about having a positive impact and that I have been doing.

You were once a member of SDP during MKO Abiola’s time. How was the party then?

Of course, I was a member of the Social Democratic Party along with Chief MKO Abiola, the late Shehu Musa Yar’Adua, and many other patriots. As a party, we worked with Chief Abiola and helped him win the June 12, 1993, presidential election. Unfortunately, the party was made defunct by the military on the 17th of November, 1993.

Nigerians have been peddling rumor that you have plans to move to the party once again. How true is this?

I have no plans whatsoever to join any party known as the SDP. I never left the PDP. I was pushed out. I did not go looking to join the APC. It was the APC that came to me at my house on December 19, 2013, appealing to me to join their party because my party, the PDP was factionalized at that time. I am one of the founding fathers of the PDP. I have absolutely no reason to contemplate leaving the PDP as those challenges which caused it to be factionalized have now been fully resolved.

It is believed that northerners are not giving in to the idea of restructuring Nigeria which other regions have been clamoring for because they believed it will lead to the dismemberment of the country. Are you on the same page with them?

I am passionate about restructuring. I believe in it. Restructuring does not mean the dismemberment of Nigeria. Rather, it would lead to a perfect union for all of us. It does not matter what tribe you come from, you have got the identity of a Nigerian. I have been a consistent advocate for restructuring since 1995 when I was a member of the National Constitutional Conference. My brother in arms in the push for restructuring was the late Dr. Alex Ekwueme. The idea for the six geopolitical zones is a fruit of our restructuring advocacy from that conference. The rotational presidency was another fruit.

But some people believed that your call for restructuring is out of pretense?

If I have been consistent about restructuring since 1995, which is 23 years ago, the question cynics should ask is this: Is it possible for a man to pretend for 23 years?

See, we must get rid of the unhealthy rivalry that exists amongst our people and creates in its place pure harmony. And for this to happen we must build true unity with fidelity to the principles espoused by our founding fathers which were the ground upon which Nigeria was built. The reason we have been having these negative disruptions and periodic chaos is that we have drifted away from those ideals that ensured that between 1957 and 1966, Nigeria was one of the most stable and economically prosperous nations in the world.

Harmony does not mean uniformity. This nation is too large and heterogeneous to adopt a one-size-fits-all approach. Rather than force all of our ethnic nationalities to have a uniform voice, I believe that the mark of a true leader is the ability to craft a blend of the various voices within Nigeria into a harmonious tune that produces pleasant music that is conducive to unity. Any forced unity that is not founded on justice is a unity of oil and water. They will never mix. But justice is the bonding agent. The glue, if you will, that binds many pages into one book, and if I were to title that book, I would call it ‘Great Nigeria’. This is the only motive behind my consistent call for the restructuring of Nigeria. I vividly remember the healthy rivalry that existed amongst the three regions in early pre-independent Nigeria. Unity founded on justice was the reason for that healthy interplay amongst the three regions.

The Western Region was allowed to exploit its resources, and they set the pace which was followed and sometimes surpassed by the other regions. Those saying that we should forget our differences and forge ahead as if they (the differences) do not exist need a reality check from Sir Ahmadu Bello, the late Sardauna of Sokoto. The Right Honourable Nnamdi Azikiwe had told the Sardauna thus: ‘Let us forget our differences’ to which Sir Ahmadu Bello responded as follows: ‘No, let us understand our differences. I am a Muslim and a Northerner. You are a Christian, an Easterner. By understanding our differences, we can build unity in our country’. It is this ‘understanding’ that I am championing, using restructuring as the only vehicle that can bring it about. Without this understanding, we will continue taking one step forward and two steps backward.

Lately, Nigeria has been plagued with killings in the hand of Fulani herdsmen. As a Fulani man, what is your view about this crisis?

This crisis is as a result total failure of our leaders. Nations are not static. They grow and change. Fifty years ago, desertification was not an issue in northern Nigeria. Now it is an issue. The changing environment has placed a great strain on people who live off the land like the herdsmen. Leadership is essentially about anticipating the consequences of these changes. When I gave the keynote speech at this year’s Silverbird Man of the Year ceremony, I addressed this issue. I said Nigeria is caught up in a Malthusian trap where population growth has far exceeded GDP growth. For the specific issue of herdsmen, in my private capacity, I established a company called Rico Gardo that provides animal feeds at very affordable prices to pastoralists so that they do not need to graze their cattle on private lands. This firm has been very successful in reducing herdsmen-farmers clashes in its area of operation. John F. Kennedy said, ‘When written in Chinese, the word ‘crisis’ is composed of two characters. One represents danger, and the other represents an opportunity.’

Why did you blame the issue on leadership failure?

I think our current set of leaders are too focused on the danger side of crisis and are not as focused on the opportunity side of it. Turn this crisis into an opportunity. New challenges require new thinking. If I were to advise the Federal Government, I would counsel them to learn from Rico Gardo. Just as Nigeria has built government and privately owned fertilizer plants, the government should build and encourage the private sector to build animal feeds factories. Sell the feeds to the herdsmen and make money from them. The value chain this industry will create will generate jobs for Nigerians and revenue for the government. But most important, it will end these clashes. I am not telling you about what I have heard. I am telling you about what I am doing. And what I am doing is working in the area where Rico Gardo is operational. My plan for the future is to expand nationwide. However, let me also say that it is a misnomer to use the term ‘killer herdsmen of Fulani extraction’ or ‘killer Fulani herdsmen’. When kidnappers kidnap, we do not identify them by their ethnicity. We identify them as kidnappers, pure and simple. The vast majority of Fulani people are peaceful and live in harmony with other ethnicities. There may be fringe elements with criminal tendencies. Some may be Fulani. Some may not even be. Let us identify them by their activities and not by their ethnicity.

Though you are yet to declare intent for 2019 presidential race, if I may ask, what plan do you have to ameliorate Nigerians’ suffering?

My focus would be on jobs. I have ideas on how to make jobs for all a reality, and in God’s good timing, I shall make this public. For now, let me say that I firmly believe that a man who has no hair cannot lend you a comb. It is wishful thinking to expect a man who is unable to create wealth in his private businesses to create wealth for the public. I have been creating jobs in the private sector for over 30 years. Modesty is my nature and is the tradition with which I was brought up. But personally, the employees in my firms’ number in the tens of thousands. There is no state in Nigeria that is not represented on our payroll. In essence, my first action would be to remove the impediments that militate against job creation. The budgeting process would be disrupted. No more would recurrent expenditure attract the lion’s share. I would reverse this. We would have a budget heavy on capital expenditure. Roads will be built in every state. Mass housing schemes would pop up in every local government area. Railways will be extended to every state capital. Rivers would be dredged to open up the hinterlands of the North. Licenses would be given to state governments to begin immediate exploitation of resources in their jurisdictions.

I would turn Nigeria into a massive construction project. I will not be doing this for fun. The purpose would be to get Nigerians working again. If our youths are busy building roads, mass housing, power stations, dams, and schools, they will not have time to be Boko Haram, kidnappers and militants. Our youths are some of the most intelligent and innovative youths on planet earth. But if we do not give them positive outlets to express their innate intelligence, we can be sure they would express them negatively.