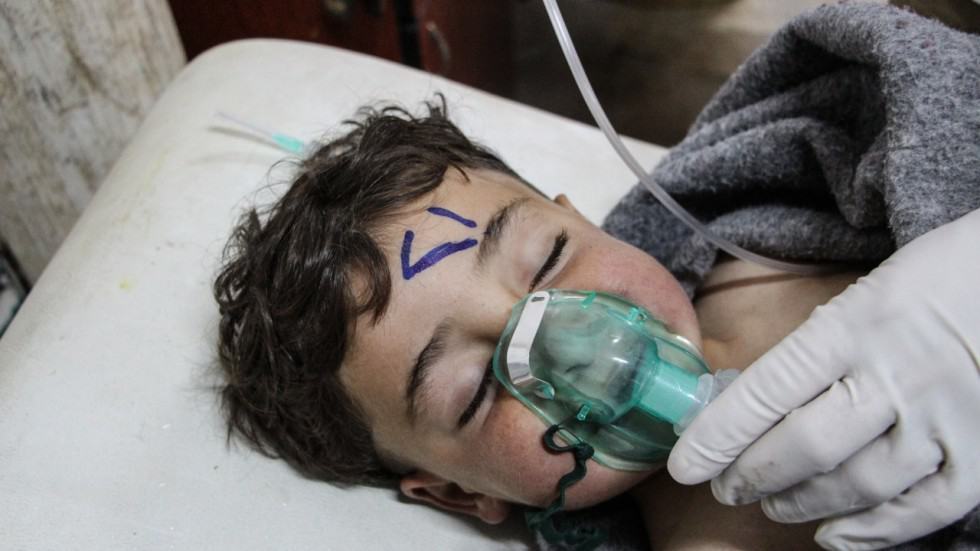 Syrian Civil Defense, an aid group, provided images of toddlers after a suspected chemical attack in the rebel-held Syrian suburb of Douma

Horrific scenes splashed across global media outlets as images released from government activists and doctors show the aftermath of the Syrian gas attack that occurred in the rebel-controlled suburb of Douma, east of Damascus on Saturday.

The White Helmets, a group of rescue volunteer, said at least 48 people had been killed and about 500 others injured or sickened. There were conflicting reports about the death toll because the Syrian government forces prevent access to investigators, aid workers, and journalists.

Images portrayed adults and children foaming at the nose, often a tale-tale sign of a chemical attack. Aid groups are already accusing President Bashar al-Assad’s government of inflicting the injuries.

United States government officials have been unable to confirm the veracity of the reports on the use of chemical weapons used on civilians. Such an occurrence could pose a threat to President Trump as he previously ordered military strikes on a Syria air base after chemical attacks last year.  If confirmed, this would be the third chemical attack to occur in Syria in the last six years.

Just last week President Trump conveyed his desire to get the U.S. out of Syria. On Sunday via his preferred communication tool, twitter he launched a revival attack on Russian leader Vladamir V. Putin in what he called a “mindless CHEMICAL attack” on women and children, blaming Russia along with the Iranian Government for abetting the Syrian Government.

Many dead, including women and children, in mindless CHEMICAL attack in Syria. Area of atrocity is in lockdown and encircled by Syrian Army, making it completely inaccessible to outside world. President Putin, Russia and Iran are responsible for backing Animal Assad. Big price…

Senator John McCain, on the other hand, accused president Trump of emboldening Asad and the Russian when he pledged to withdraw US forces from Syria.

.@POTUS‘s pledge to withdraw from #Syria has only emboldened Assad, backed by Russia & Iran, to commit more war crimes in #Douma. @POTUS responded after last year’s chemical attack. He should do so again & make Assad pay a price for his brutality. https://t.co/u30kF0ww8g

Former Homeland Security Advisor and Maine Senator, Susan Collins (R) told CNN, “This attack with chemical weapons which are banned by international conventions is absolutely horrific. But is  further reason the President ramp up the pressure and sanctions on the Russian government because, without the support of Russia, I do not believe Assad would still be in office.”

“I lost consciousness. I couldn’t breathe anymore; it was like my lungs were shutting down,” recalled the resident of Douma, in Syria’s Eastern Ghouta. Aljazeera reported survivors and activist shared their horror stories after the attack.

The British Foreign Office called for an immediate investigation stating that if the use of chemical weapons provides to be true, “it is further proof of Assad’s brutality.”

The chemical attacks occur on the heels of several months efforts by the Syrian government to retake a group of area east of Damascus known as Eastern Ghouta. The city is held by rebels who seek to topple Mr. Assad’s regime. The rebels are reported to have shelled Damascus, killing several civilians. The Syrian government plans to retake Douma, the last remaining town still under their control.

According to the New York Times, Saturday afternoon women and children were included in the 15 who reportedly had breathing problems after an airstrike in the area, Mahmoud Aadam a spokesman for the Syrian Civil Defense said via facebook live on Sunday.

In a joint statement released from the Syrian Civil Defense and the Syrian American Medical Society, more than 500 people had fled to medical centers after the assault “with symptoms indicative of exposure to a chemical agent.” Those symptoms include trouble breathing, foaming at the mouth, burning eyes and the “emission of a chlorine-like odor”.

One person arrived dead at the clinic, six others died after arrival, and a rescue worker reported nearly more than 40 deceased in their homes. The bodies have yet to be evacuated due to the strong odoriferous chemicals and lack of protective equipment.

According to the Syrian Observatory for Human Rights, 56 people were had been killed in the past 24 hours, including 21 who sufficed in the basement of a building that had collapsed on them. Approximately 500 others were wounded in the bombardment and 70 had breathing troubles, the group stated.

In a statement from the State Department, “the Assad regime and its backers must be held accountable, and any further attacks prevented immediately,” said Heather Nauert, a spokeswoman.

French Foreign Minister, Jean-Yves Drain of France on Sunday said reports of the chemical attack were extremely worrisome, calling for the United Nations Security Council to meet quickly to examine the situation at hand.

The spread of bogus stories about the use of chlorine and other poisonous substances by government forces continues as the Russian Foreign Ministry dismissed the report as fake. “The aim of such deceitful speculation, lacking any kind of grounding, is to shield terrorists and to attempt to justify possible external uses of force.”

The official Iranian news agency stated on Sunday that reports of the gas attack were not based on facts and “an excuse” by the United States and Western countries to take military action against Damascus, said Bahram Qsemi a spokesperson from Iran’s Foreign Ministry.