Central American Asylum seekers to be met by U.S. National Guard at border 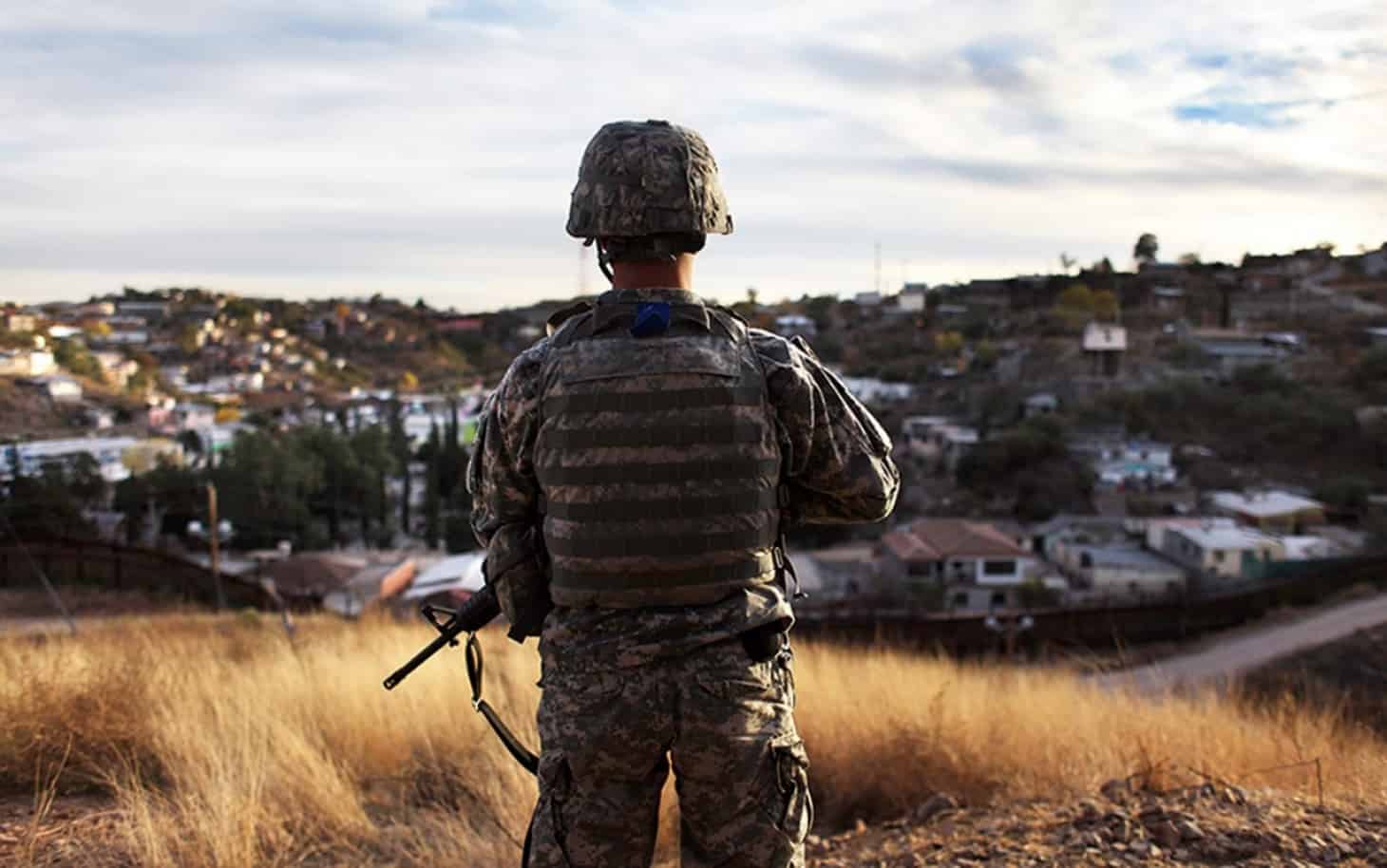 The participants who refer to their movement as a “peregrinos” the Spanish word for pilgrimage are part of an effort that has been in action since 2010. The dual part humanitarian/pilgrimage mission includes citizens from varying Central American caravan countries and includes; women, men, and children – all face a future filled with nothing but uncertainty.

Several people along the caravan site Mr. Trump as the dangerous one as reported on by Leyla Santiago who is on the ground covering the pilgrimage in Puebla, Mexico.

Past years have not garnered such nation-wide attention. However, recent political turmoil in Honduras has created an explosion of migrants partaking in the caravan. Previous years the pilgrimage numbers have ranged from 200-300 refugee seekers, this year it is near 1600. Honduras, an impoverished country of 9.3 million people where gang violence has made the murder rate one of the highest in the world is one of the reasons for the multiplication of migrants.

The migrants left the southern Mexico border city of Tapachula on March 25 and for days have marched en masse – on foot, hitchhiking and on the tops of trains fleeing violence and poverty in their homelands seeking a better life elsewhere.

The annual event usually exercised during Easter week is somewhat conducted for partial protection and to make a political statement has sparked the unforeseen backlash from President Trump. The primary intent is to draw a more wide-ranging view of the plight of migrants.

It was only after reports of the migrant caravan traveling mostly unfettered through Mexico aired on the Fox News program “Fox & Friends” and other media outlets, President Donald Trump unleashed a barrage of tweets characterizing the group as a border-security threat.

In a barrage of Tweets, Mr. Trump described the group of migrants as dangerous group surging toward the U.S. border and demanded Mexican official’s halt the caravan, suggesting otherwise would make them pay dearly in trade negotiations or aid cuts.

Mexican migration authorities distributed transit permits giving the migrants either 20 days to leave the country or 30 days to apply for legal immigration status in Mexico formally.

The Trump administration has frequently argued the increase in the number of families and children feeling violence in their respective countries of origin seeking asylum at the U.S.- Mexico border is a result of “loopholes” in U.S. immigration laws, however, this distortion of reasoning is an inaccurate characterization of the U.S. asylum  process according to the Washington Office on Latin America.

The sharp rise in asylum seekers from Central America’s Northern Triangle region consisting of Honduras, Guatemala, and El Salvador stems from the record levels of violence in those respective countries. In fact, the number of migrants apprehended at the U.S. – Mexico border is near its lowest level since the early 1970’s.

The vulnerable population who are deliberately seeking out U.S. border security authorities are doing so for mere protection. Confirmed requests for asylum of individuals from Guatemala, El Salvador, and Honduras has increased by 25 percent in the fiscal year 2017 compared to 2016, according to WOLA.

White House Chief of Staff John Kelley once acknowledged the mass immigration of children from Central America to the U.S.-Mexico border primarily consists of “(parents that) are trying to save their children.” All three countries are experiencing unparalleled levels of violent crime. El Salvador and Honduras ranking amongst the top five most violent countries in the world.

U.S. asylum law applies to those who have the well-founded fear of persecution “on account of race, religion, nationality, membership in a particular social group, or political opinion.” Unfortunately, migrants fleeing generalized crime and violence in their home country do not comfortably fit in these finite categories.

Asylum seekers must pass what is known as a “credible fear” interview conducted by the U.S. Citizen and Immigration Services asylum hearing. Far from being an “easy ticket” to life in the United States, this crucial step is the first among many which must be passed as part of the assessment to determine how high the threat to the asylum seekers entails. The bar is incredibly very high even though the initial intent was to demand a low threshold of evidence from applicants.

Several studies have reported contrary to Session’s claims, many Central America refuge seeker’s applications are rooted in legitimate concerns and according to the United Nations High Commissioner of Refugees’ (UNHCR) analysis of the screening conducted by U.S. asylum officers, over 80 percent of women from El Salvador, Guatemala, Honduras, and Mexico “were found to have a significant possibility of establishing eligibility for asylum or protection under the Convention against Torture.”

Brig. Gen. Traci Norris, Commander of the Texas Army National Guard, stated the deployment would begin meeting “the priorities of the governor and the president in securing our border.” Ground surveillance vehicles and light-medium aircraft will be provided in addition to troops.

Texas, which deployed 100 troops in 2014 as part state border-security operation maintains a 1,241 mile-long border with Mexico and the longest. An additional 1,000 troops were deployed under claims the drug cartels were taking advantage of the federal government’s focus on tens of thousands of Central Americans flooding the border at the time.

The recent deployment of additional National Guard members was announced on April 6, 2018, following a news conference where military officials detailed their intent to send approximately 250 guardsmen to the area.

Arizona followed suit and announced it would send 150 troops to its border with Mexico which spans 375 miles.

Trump and aides ordered law-enforcement officials to redouble efforts to energize the zero-tolerance policy on illegal border entrances as well as put an end to “catch and release” programs which allow immigrants into the U.S. while awaiting court hearings.

Defense Secretary Jim Mattis signed an order on the evening of April 6, 2018, authorizing his department to foot the bill for up to 4,000 National Guard personnel through September 30 in efforts to aid Border Patrol at the Mexico border under the “command and control of their respective governors.” No mention of the costs incurred was mentioned.

According to the New York Times, the National Guard deployment in 2014 with the purpose to help combat the brutal Mexican drug cartels cost Texas Military forces nearly $63 million.

The deployment is a federal initiative to be managed by the state, a hybrid known as Title 32. In this capacity, a governor retains control of the National Guard, but the federal government finances the operation.

On April 5, Ronald Vitiello, the U.S. Customs, and Border Protection’s acting deputy commissioner cautioned against a rushed deployment. “We are going to do it as quickly as we can do it safely,” Vitiello told Fox News Channel. According to his statements, guard members are to be placed in jobs that do not require law enforcement work, an apparent reference to undertaking patrols and making arrests.

In Washington, Marine Lt. Gen. Kenneth F. McKenzie told reporters at the Pentagon that it has not yet been determined how many if any, of the troops in the border security operation will be armed.

For decades National Guard troops have been called upon from both parties in times of need. In 2010, the Democratic governor of New Mexico at the time, Bill Richardson ordered a few dozen troops to his state’s border with Mexico after the killing of an Arizona rancher.

Trump ordered the deployment saying,  “we are at a crisis point” with illegal immigration, Secretary Kirstjen Nielsen of the Department of Homeland Security said.

Nielsen said guard members would provide support to border officials, “help look at the technology, the surveillance, in some cases, we’ll ask for some fleet mechanics” and free up agents trained in law enforcement for other duties.

Arrests along the U.S. border with Mexico jumped to 50,308 in March, a 37 percent increase from February, and more than triple the same period last year. Border arrests rose 10 of the last 11 months after falling in April 2017 to the lowest since the Department of Homeland Security was created in 2003.

Mobilization of troops in Texas has reignited concerns about the militarization of border communities and has enraged local officials and lawmakers who say troops are not needed, and false impressions that their cities are under siege have been given.

“It sounds to me more like political rhetoric than something that is actually needed on our border,” said Representative Vincente Gonzalez, a Texas Democrat whose district includes the border city of McAllen. According to Gonzalez, McAllen is at a 32-year low in crime and a 46-year low in illegal entries. “It’s the wildest thing in the world for us to hear that they want to bring National Guard troops to the border region.”

Mr. Trump and federal officials continue to tout the need for United States Border Control to address what he says is a growing threat of unauthorized immigrants, drugs, and crime from Central America.

In Mexico, the country’s politicians condemned Trump’s deployment decision, and Mexico’s Senate passed a resolution last Wednesday calling for the suspension of cooperation on illegal immigration and drug trafficking in retaliation.

Now, there is more than 20,000 Border Patrol agents along the U.S.-Mexico boundary and Trump wants to add 5,000 more to the force’s currently funded level of about 21,000.

Democratic Gov. Kate Brown of Oregon said she would not send troops if asked because she is “deeply troubled by Trump’s plan to militarize our border.” And Republican Vermont Gov. Phil Scott said he “would not be eager” to send troops because so many other states are closer to the border with Mexico.

Arkansas Gov. Asa Hutchinson, a Republican, said he would be willing to send National Guard members to the border “who are experienced and who have done that before.

Montana Gov. Steve Bullock, a Democrat, said he would never deploy National Guard troops “based simply on the whim of the President’s morning Twitter habit.”