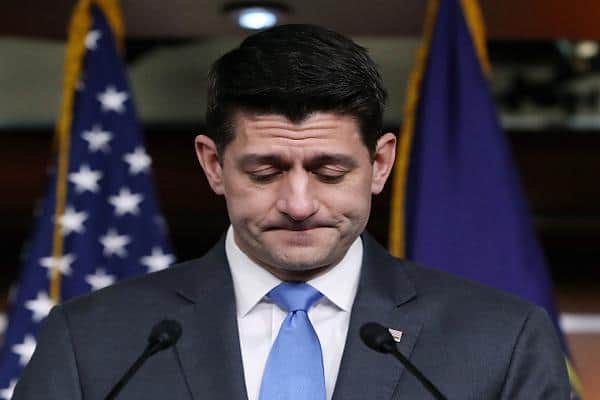 House Speaker Paul Ryan (R-Wisconsin) announced today he will not be seeking re-election this year, ending his time in the House in January.

Though rumors about Ryan’s exit have been swirling for months, his exit took many by surprise. Most Republicans assumed he would stay on at least through the 2018 midterm elections. Ryan said he would continue to help other Republicans raise money for reelection, as his powerful fundraising skills are unparalleled.

Speaker Ryan said his main reason for leaving was to spend more time with his wife and three children in Wisconsin. Ryan named the recent passing of tax cuts as his most significant victory. He also stressed he did not seek the position of speaker, only taking the spot after former Speaker John Boehner resigned.

Immediately after his announcement, speculation began about other reasons for Ryan’s departure.

Speaker Ryan was publicly critical of President Trump during his candidacy, only relenting to support him after his nomination. He is continually questioned about Trump’s decisions and the direction of the presidency. Though historically a Republican president would be on the side of Congressional Republicans, Trump repeatedly clashed with Ryan. While Congress hoped immigration reform and the dismantling of the Affordable Care Act to be a guarantee after the presidential election, political infighting and public gaffes effectively squashed both. Ryan may not be willing to engage in more battles with his own party’s president. And with Special Counsel Robert Mueller continuing his investigation into the Trump administration, Ryan does not want to be affiliated with any legal troubles.

Despite their disagreements, President Trump tweeted his support following the announcement:

Speaker Paul Ryan is a truly good man, and while he will not be seeking re-election, he will leave a legacy of achievement that nobody can question. We are with you Paul!

Certainly, there is the implication that no one leaves a winning team. Ryan may be tacitly signaling to his party that the battle for the House is effectively lost and they should focus on maintaining power in the Senate. Even in his conservative district in Wisconsin, Ryan was facing two Democratic opponents and a far-right Republican rival.

Since 2017, 20 Democratic candidates have won special state elections in seats previously held by Republicans. The most recent was in Pennsylvania, where Democrat Conor Lamb defeated Republican Rick Saccone in a district that voted overwhelmingly for Trump in the 2016 election. This was despite Republicans vastly overspending Democrats in advertising and even a special visit in the days before the election by President Trump. In the biggest surprise, Democrat Doug Jones defeated Republican Roy Moore in the solidly Republican state of Alabama in December. Both elections were marred by scandal as Moore was accused of decades of sexual harassment against young women and Pennsylvania’s 18th district seat was vacated due to an extramarital affair cover-up. Future scandals may plague future candidates as the #metoo movement stays strong.

Speaker Ryan’s exit could trigger more Republicans on the fence about re-election. Since 2016, 40 Republicans have announced they will not seek re-election while only 19 Democrats have done the same.

Republicans are facing challenges all across the country. Even self-described Republicans are fed up with President Trump’s rhetoric and are increasingly turning to moderate Democrats, such as Conor Lamb who openly criticized Senate Minority Leader Nancy Pelosi during his campaign. New issues have become more important to voters, especially gun control legislation driven by the recent school shooting in Florida and the subsequent surge of student activists.

Another challenge is expected increased voter turnout in the midterm elections. Higher than normal voter turnout has helped sway special elections. According to a recent Institute of Politics study, 37% of 18-29-year-olds say they will “definitely be voting” in this year’s midterm elections compared to 23% in the 2010 midterm elections. 51% of those are registered Democrats compared to 36% Republicans. Young people have been politically active in several movements created after President Trump’s election: Black Lives Matter, the Women’s March, and the gun-control focused March for our Lives.