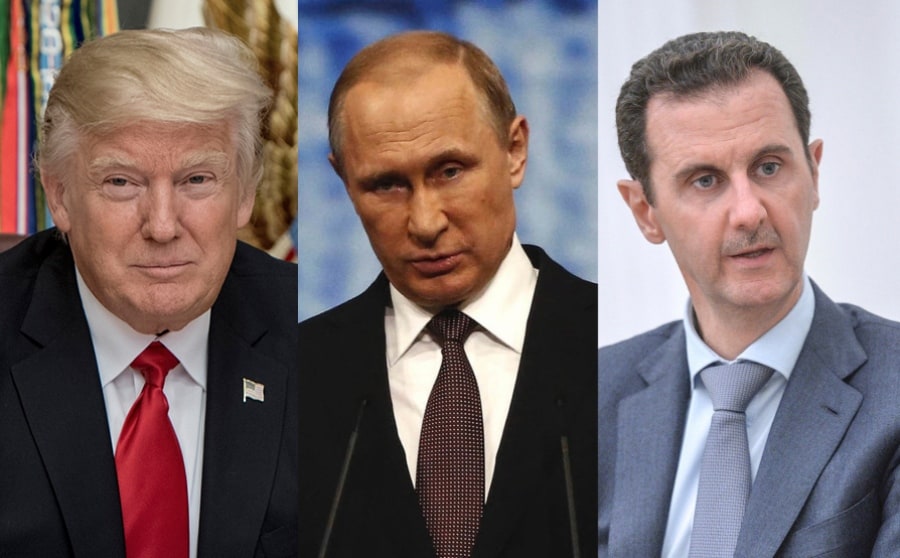 In a tweet early Wednesday morning President Donald Trump taunted Russia. Trump tweeted, “Russia vows to shoot down any and all missiles fired at Syria. Get ready Russia, because they will be coming, nice and new and “smart!” You shouldn’t be partners with Gas Killing Animal who kills his people and enjoys it!”

Just an hour later, in an apparent attempt to alleviate tensions, Trump lightened his rhetoric with a follow-up tweet. He said the US would be willing to help Russia with their economy. “Our relationship with Russia is worse now than it has ever been, and that includes the Cold War. There is no reason for this. Russia needs us to help with their economy, something that would be very easy to do, and we need all nations to work together. Stop the arms race?”

The unexpected tweet surprised White House aides who were still working on a formal response to Syria’s chemical attack on civilians. A senior White House official told the Washington Post the tweet was “alarming” and “distracting.” The official said, “It’s just like everybody wakes up every morning and does whatever is right in front of them.”

The President hasn’t provided additional details or a timetable for the attack. White House spokesperson Sarah Huckabee Sanders said all options are still on the table, including military intervention. Sanders said, “That’s (missile attack) certainly one option, but that doesn’t mean it’s the only option or the only thing that the President may or may not do.”

CNN reported late Wednesday evening that “Two US Navy destroyers armed with Tomahawk cruise missiles are in position and ready to be called into action, among other assets including jets and submarines should President Donald Trump make good on his threat to order a military strike on targets in Syria.”

Defense Secretary James Mattis said the US military is on standby if ordered to strike but officials are “still assessing the intelligence.”

British Prime Minister Theresa May said “all the indications” are that the Syrian President Bashar as-Assad was responsible for the chemical attack. The British cabinet may approve military action and pave the way for British participation in a retaliatory strike. The BBC reported that May might “take action against the Assad regime in Syria without first seeking parliamentary consent.”

French President Emmanuel Macron said on Tuesday, “If chemical weapons are used on the ground, and we know how to find out their provenance, France will launch strikes to destroy the chemical weapons stocks.”

Russia’s Foreign Ministry spokeswoman Maria Zakharova responded to Trump’s warning on her Facebook page. Zakharova said, “Smart missiles should fly towards terrorists and not the legitimate government which has been fighting against international terrorism in its territory for several years.”

Zakharova said the smart missiles would destroy any evidence of a chemical weapons attack leaving international inspectors nothing to investigate.

Trump rounded out the Wednesday morning tweet storm partially blaming the dismal state of US Russia relations on the Mueller investigation and Democrats loyal to President Obama. Trump tweeted, “Much of the bad blood with Russia is caused by the Fake & Corrupt Russia Investigation, headed up by the all-Democrat loyalists, or people that worked for Obama. Mueller is most conflicted of all (except Rosenstein who signed FISA & Comey letter). No Collusion, so they go crazy!”

Responding to criticism that the President telegraphed plans to attack Syria, Trump attempted to shift the narrative Thursday morning. Trump tweeted, “ever said when an attack on Syria would take place. Could be very soon or not so soon at all! In any event, the United States, under my Administration, has done a great job of ridding the region of ISIS. Where is our “Thank you America?”