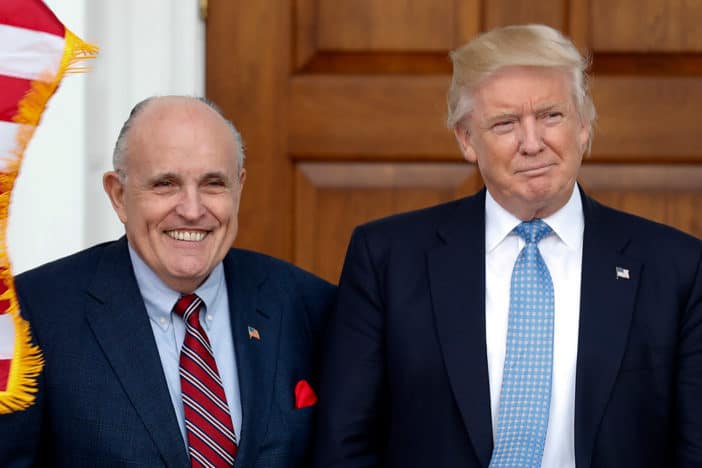 In a Washington Post interview, Giuliani said, “I’m doing it because I hope we can negotiate an end to this for the good of the country and because I have high regard for the president and Bob Mueller.”

President Trump’s attorney Jay Sekulow announced the addition of Giuliani in a statement on Thursday. Trump was quoted directly in the statement, “Rudy is great. He has been my friend for a long time and wants to get this matter quickly resolved for the good of the country.”

Giuliani told the Washington Post that “he formalized his decision in recent days, including over dinner last week at Trump’s Mar-a-Lago resort in Florida.”

Giuliani will replace John Dowd. A defense attorney who specializes in White Collar offenses, Dowd resigned last month after calling for an end to the Russia investigation. Dowd said, “I pray that Acting Attorney General Rosenstein will follow the brilliant and courageous example of the FBI Office of Professional Responsibility and Attorney General Jeff Sessions and bring an end to alleged Russia Collusion investigation manufactured by McCabe’s boss James Comey based upon a fraudulent and corrupt Dossier.”

Dowd is a controversial, public figure who’s been known to insult reporters and critics. He also took personal responsibility for a potentially, self-incriminating Trump tweet.

In December, the President said in a tweet, “I had to fire General Flynn because he lied to the Vice President and the FBI. He has pled guilty to those lies. It is a shame because his actions during the transition were lawful. There was nothing to hide!”

The tweet suggested Trump knew Flynn lied to the FBI before firing him.

Giuliani is expected to take a lead role in the Muller investigation and may try to function as stabilizing presence, a legal and public relations counterbalance to Dowd’s aggressive efforts.

When asked if Trump was going to fire Deputy Attorney General Rod Rosenstein, Giuliani declined to comment. “I’m not involved in anything about those issues. My advice on Mueller has been this: He should be allowed to do his job. He’s entitled to do his job”, Giuliani said.

Giuliani, a former federal prosecutor for the Southern District of New York, the office that executed a subpoena for the seizure of documents and electronic devices from Trump’s personal attorney Michael Cohen, is no stranger to controversy.

In November 2016 Giuliani admitted on Fox and Friends that the FBI leaked information about the Hillary Clinton email investigation to Donald Trump’s Presidential campaign.

Giuliani also has his own, personal exposure to the Russia case. Politico reported on Thursday that, “His (Giuliani) former law firm, Bracewell & Giuliani, advised the controversial data-mining outfit Cambridge Analytica on its obligations under U.S. campaign law.”