Macron Attacked Nationalism, Critique Trump In Speech To US Congress 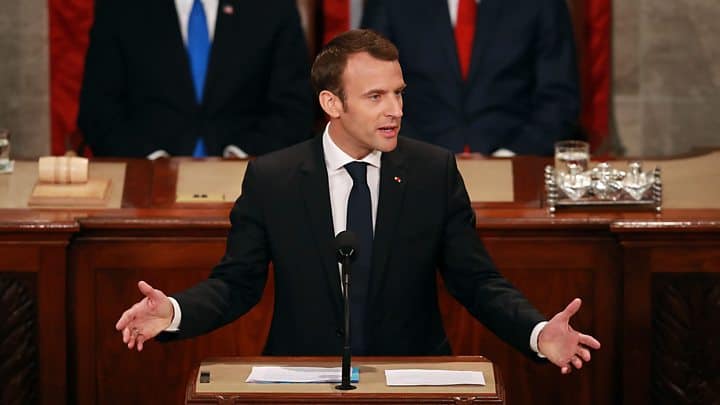 French president Emmanuel Macron at the US Congress

French President Emmanuel Macron crystallized his differences with President Donald Trump in a few key areas during a speech to a joint meeting of Congress on Wednesday.

Macron denounced extreme nationalism, called on the US to remain in Iran deal and said he expects America will renter the Paris Agreement. Trump’s America First policy decries multilateralism. Trump called the Iran deal insane and pulled the US out of the Paris climate accord just over a year ago.

In his speech to Congress Macron said “freedom is never more than one generation away from extinction” and the US and France must work together to meet current global challenges. Macron said western values themselves are at risk and we must stand together so that our shared principles prevail.

“The 21st century has brought a series of new threats and new challenges that our ancestors might have never imagined,” Macron said. “We can build the 21st-century world order based on a new breed multilateralism, based on a more effective, accountable, and results-oriented multilateralism.

Macron suggested two paths forward, isolationism or multilateralism. “We have two possible ways ahead. We can choose isolationism, withdrawal, and nationalism. This is an option but closing the door to the world will not stop the evolution of the world. It will not douse but inflame the fears of our citizens. We have to keep our eyes wide open to the new risks right in front of us,” Macron said.

Macron called nationalism an illusion and said he doesn’t share a fascination for new strong powers or the abandonment of freedom.

The French President called for a twenty-first-century world order and “accountable, results-oriented multilateralism.” Macron received a standing ovation from both sides of the aisle when he challenged the United States to meet the obligations of its own invention.

Macron said, “This requires more than ever the United States involvement, as your role was decisive for creating and safeguarding today’s free world. The united states is the one who invented this multilateralism. You are the one now who has to help to preserve and reinvent it.”

In a veiled reference to international trade inequities with China and the EU Macron offered a rebuke of Trump’s tariff initiatives abroad and deregulation policies at home. Macron said, “I believe facing these challenges requires the opposite of massive deregulation and extreme nationalism.”

Macron said, “We need a free and fair trade for sure. A commercial war opposing allies is not consistent with our mission, our history….at the end of the day it will destroy jobs, increase prices, and the middle class will have to pay for it.”

Macron believes the World Trade Organization should adjudicate international trade disputes. “We wrote these rules, we should follow them,” Macron said.

Macron predicted the United States would renter the Paris Climate Agreement and that we must work together to achieve a smooth transition to a low carbon economy. The French President said, “we are killing our planet.” “Let us face it, there is no Planet B,” Macron said.

The French President’s initiatives aligned with those of President Trump when it comes to the denuclearization of North Korea and a commitment that Iran will never be permitted to develop nuclear weapons.

Macron is not in favor of Trump’s threat to tear up the Joint Plan of Action (JPA), the interim deal signed by the US, France and other permanent members of the UN security council to lift sanctions on Iran in return for Iran’s nuclear program rollback.

Macron said, “There is an existing framework. We signed it at the initiative of the United States.” Macron added, “That is why we cannot say we should get rid of it like that. But it is true to say that this agreement may not address all significant concerns. But we should not abandon it without having something substantial. That’s why France will not leave the JPA because we signed it.”