Korea Reunification: From The Brink Of Nuclear War To Hopes For Peace 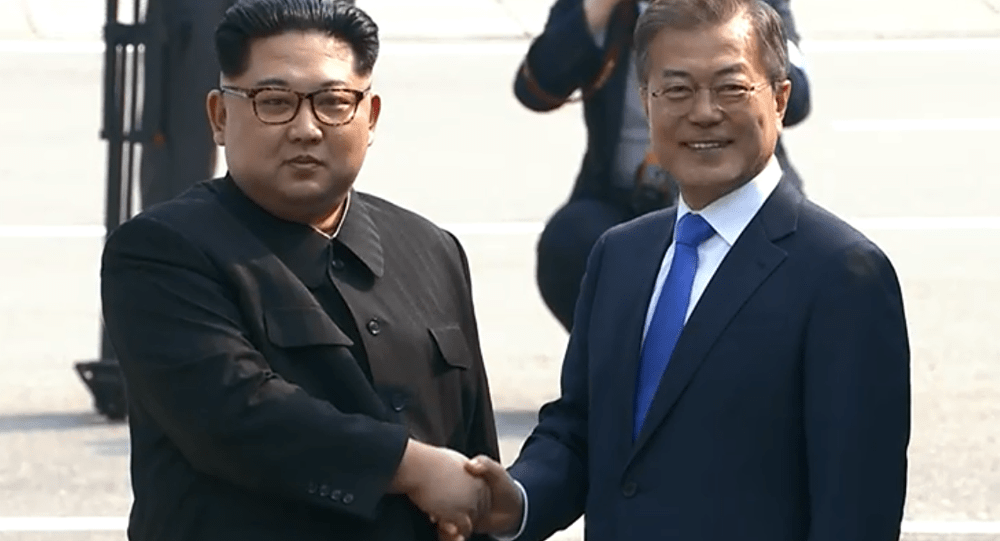 The heavily publicized day-long summit was filled with long conversations, photo opportunities, and elaborate ceremony in addition to heartfelt moments between the two leaders. The two officially met on the South Korea side as following with tradition; the younger leader should be the one to show deference to the older leader. However, when President Moon asked when he would be allowed to visit North Korea, President Kim responded: “How about now?” President Joon symbolically stepped over the formal border separating the two countries and the presidents embraced. They then walked to the Panmunjom, a village in the demilitarized zone.

The ceremony was also unique as cameras followed the two and events were broadcast live in South Korea and China. The meeting was not televised on North Korean public television though the public was informed their president was visiting the South. The North Korean government has notoriously kept very close control on their media and image. President Kim spoke before the press but did not take questions from journalists.

Though the two leaders spoke one-on-one privately, cameras followed their day. The two leaders walked across a blue bridge, blue being the color of the Korean reunification flag, planted a ceremonial tree with soil from both countries, and attended a banquet with their wives. The banquet’s foods were carefully selected with dishes favored by each leader and a cake decorated with the Korean peninsula. 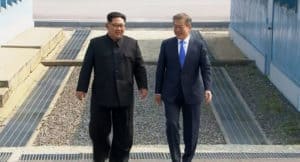 Critics were quick to point out that no concrete plans or timetable were made for the future. The leaders planned to engage in more peace talks and “seek a phased disarmament.” South Korean officials hope demilitarization will take place by the end of President Trump’s first term in office in 2021.

North Korea has a history of proposing an end to conflicts and later pull out when their terms are not met. In 1992, North Korea pledged to not hold nuclear weapons and now has an estimated 60 nuclear bombs.

Their joint statement read they shared a “common goal of realizing, through complete denuclearization, a nuclear-free Korean Peninsula… South and North Korea will actively cooperate to establish a permanent and solid peace regime…Bringing an end to the current unnatural state of armistice and establishing a robust peace regime on the Korean Peninsula is a historical mission that must not be delayed any further.”  Noticeably, the word regime instead of treaty was used, indicating a permanent stop to the military action.

The last year has been tumultuous for the two countries. South Korea and the United States put sanctions on North Korea after their nuclear weapons threats, hurting the country economically. But after the winter Olympics in Pyeongchang, which President Kim’s sister attended, relations may have thawed. Kim said he was impressed by South Korea’s clean and efficient public transportation and in a rare moment of admitting weakness, said he was embarrassed about his own country’s poor transportation infrastructure.

North Korea’s relationship with the United States has also been problematic, at times on the brink of nuclear war. President Kim began testing of its long-range missiles, weapons that could reach America. President Trump nicknamed President Kim “Rocket Man” and taunted his regime repeatedly on Twitter. President Kim cautioned Trump he had a nuclear button in his office and their missiles could reach America. Trump escalated his attacks and even vowed in front of the United Nations General Assembly that he would “totally destroy” Korea. Trump’s attacks came in the midst of South Korea’s efforts to initiate peace talks in January. The ensuing conflicts created uncertainty among the entire world, with diplomats either criticizing Trump or praising his hard-line efforts.

An agreement for peace will likely require the removal of American troops from South Korea. Officially, the Korean War only stopped because an armistice passed but both parties did not agree to a peace treaty, creating the division of both Koreas.

President Trump has long said one of the goals of his presidency was to reunite the Korean peninsula, though his actions sometimes seemed to suggest otherwise. On Friday he tweeted,

KOREAN WAR TO END! The United States, and all of its GREAT people, should be very proud of what is now taking place in Korea!

Trump was set to meet with President Kim in the next month though, in his trademark style, he threatened to leave the meeting if it was not “fruitful.”

Though President Kim showed deference and respect to President Moon during the visit, he maintained his notorious paranoia. Security ran alongside his limousine to protect him and swept every room for electronic devices before he entered. His cleanliness habits were also maintained as any chair he sat on was sprayed with sanitizers by his advisors.

In a lighthearted moment, President Kim even joked about the conflicts in the past year, ensuring President Moon he would no longer interrupt his sleep with early morning missile tests. Though the statement was a joke, it was a reminder of the profound violence North Korea is still capable of causing now and in the future.