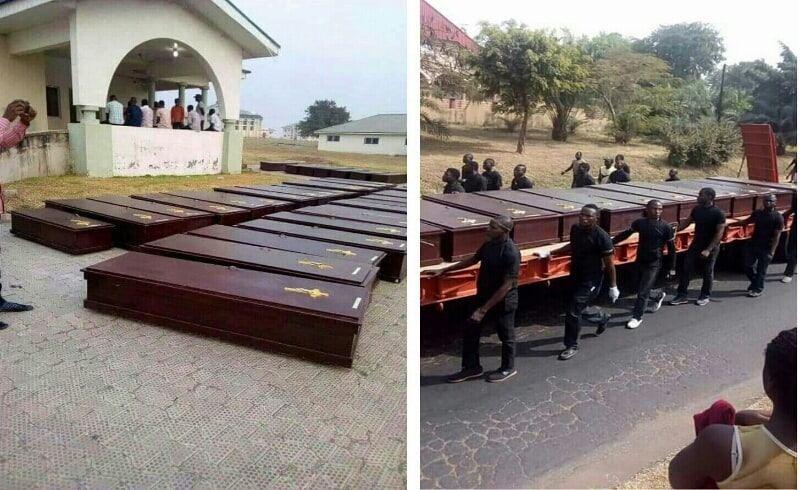 President Muhammadu Buhari-led administration has come under attacks over its seeming inability to contain the spate of killings in the country, primarily caused by suspected herdsmen.

On Tuesday, the attacks garnered more strength with recent killings in Ayar-Mbalom, a community in Gwer East Local Government Area, of Benue State; one of the most ravaged in the country since the turn of the year.

CARACAL REPORTS gathered that suspected herdsmen sacked St. Ignatius’ Catholic Church in the community, killing about 19 persons and many displaced in the blood-letting exercise.

Two Catholic priests- Joseph Gor and Felix Tyolaha, both reverend fathers were among those killed in the attack.

Worried by the continued blood-letting in the country, the House of Representatives on Wednesday summoned Buhari to appear and explain efforts taken by his administration to end the scourge.

The motion to invite the president was moved by a lawmaker representing Kano under the platform of the ruling All Progressives Congress (APC), Baballe Bashir and unanimously adopted by the majority of the lawmakers during plenary on Wednesday.

While moving the motion, the Kano lawmaker said: ” We should summon Mr. President, he is the chief security officer of this country.

“Let him come here and appear to brief us . What has Mr. President been doing to address all these security challenges? We need to know.

“I move that we should summon Mr. President.”

Seconding the Bashir’s motion, another APC lawmaker from Benue, Dickson Takhigir, said: “Benue is under siege, and if we don’t take the necessary actions, it will amount to abdicating the responsibility of government to protect lives and property of its citizens,” he said

“It appears there is no moral will to tackle the matter because continuous complaints about the killings seem to fall on deaf ears.”
He said the provision of the law allows self-defense and called on Nigerians “to do the needful.”

In a related development, the lawmakers passed a vote of no confidence on the service chiefs and called for their immediate removal.

The House presided over by Deputy Speaker of the House, Yakubu Dogara also resolved to suspend its plenary for three days (one week) in solidarity with victims of attacks across the country.

The recent move by the lawmakers was consequent upon an earlier motion of urgent public importance moved by an APC lawmaker from Benue State, Mark Terseer – Gbillah, raised to bring to the attention of the House, an earlier attack on Nakka by soldiers on April 19.

Addressing the House, Terseer – Gbillah, had chronicled how the security officials had soldiers torched houses and killed two villagers to avenge the death of a soldier, believed to have been murdered by unknown persons in the area.

Buttressing his point, the lawmaker observed that it was unfortunate that Benue State has been at the mercy of various attacks without any concrete measure to address the situation.

His words: “Mr. Speaker, as we speak, what we hear is that another 22 lives have been taken this morning in Daudu, Guma.

“It will appear that war has been declared on Benue State. We have to investigate the alleged connivance by the army and other security agencies; their inability to carry out security duties in the state “, he added.

CAN call for nationwide protest against herdsmen, bloodshed

Meanwhile, the Christian Association of Nigeria, CAN, has condemned the recent killings in Benue State and other parts of the country, calling for a nationwide protest against the ugly situation.

Speaking in a statement on Wednesday, CAN President, Rev. Olasupo Ayokunle, said such measure has become imperative to create more awareness about the incessant killings in the country.

He urged Christian faithful in Nigeria to organize peaceful protests within their church premises on Sunday, April 29, 2018.

The statement reads: “CAN urges Christians in Nigeria to hold a peaceful protest on the set-aside date, in the premises of their churches asking the Federal Government and the security agencies to stop the unending killings and bloodshed in the country.

“Christians are to carry placards with inscriptions meant to address issues about sustained killings, attacks, and destruction of their property in Nigeria.

“The inscriptions on placards could read, ‘ Enough of bloodshed in Nigeria, ‘ ‘ Enough of unlawful killings in the country,’ ‘FG, Release Leah Sharibu from the bondage, ‘ ‘ FG, Stop Herdsmen Killings, ‘ CAN reject FG’ s poor handling of insecurity.

“CAN seizes this medium to appeal to the government of President Muhammadu Buhari to mount different effective plans aimed towards disarming herdsmen across the northern states and in communities where they have been wreaking havoc across the country in the national interest.

“The Association also calls on the heads of the security agencies to wake up to their constitutional role of protecting lives and property across the federation while preventing Nigeria from descending into chaos and lawlessness.

“CAN reminds Christians across the federation the importance of the forthcoming general elections and the need for them to fully participate this time, by trooping to obtain their voter cards with which to play a role in the emergence of the new set of political leaders who could guarantee their security and safety.”