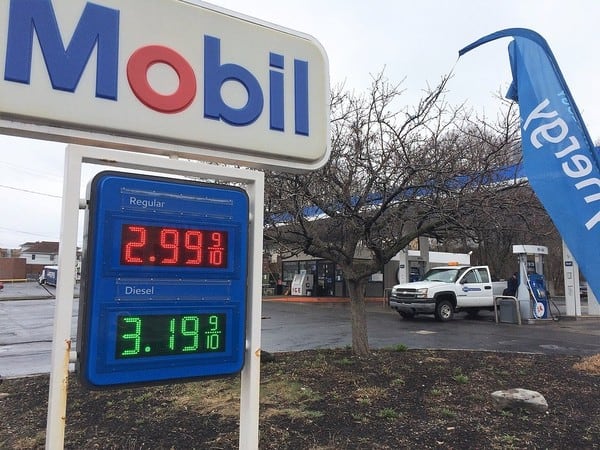 With Memorial Day fast approaching peak summer driving season is just around the corner and gas prices have been steadily creeping up. The price of motor fuel increased nearly eight percent since March 2018.

The average price of a gallon of gasoline nationwide is $2.96, a 19% increase from last year. San Francisco, Seattle and Los Angeles currently exceed $3 per gallon.

CNBC reported on Thursday that President Trump’s decision to pull out of the Iran deal is partially to blame for the uptick.

Refiners must purchase crude oil to craft the warm weather formulations. Trump’s decision to unilaterally re-impose sanctions on Iran have increased the price of the commodity.

Concerns about pending sanctions on exports of Iranian crude precipitated a price spike this week. Oil prices are now at the highest level since 2014. Reuters reported on Thursday that Iran pumps 4% of the world’s oil “and exports about 450,000 barrels per day (bpd) to Europe and around 1.8 million bpd to Asia.”

Trump may have temporally made a bad situation worse.

CNBC said, “Prices had already been rising as a strong global economy has kept demand high for gasoline and other refined products.”

While the demand for oil increases production has slowed. Saudi Arabia and other producers have been steadily decreasing output for the past fifteen months. OPEC member states have been slashing oil production since January 2017 and intend to continue those efforts until the end of this year.

Venezuela, another major global supplier has been struggling with an it’s own economic crisis and decreased crude production by 25%.

These numbers don’t bode well for the busy summer season and drivers in the US can certainly expect short term pain at the pump.

Longer term prospects are uncertain at this juncture.

CNN reported on Thursday that analysts for Bank of America believe “collapsing oil production in Venezuela and potential export disruptions in Iran could push the price of Brent crude as high as $100 per barrel in 2019.” Brent Crude is currently priced at $77.45 a barrel.

Saudi Arabia promised to fill the gap and “offset the loss of Iranian crude output.” Reuters reported on Wednesday that, “Saudi Arabia is monitoring the impact of the U.S. withdrawal from the Iran nuclear deal on oil supplies and is ready to offset any shortage but it will not act alone to fill the gap, an OPEC source familiar with the kingdom’s oil thinking said.”

CNBC reported on Wednesday that Russia would be Saudi Arabia’s production partner. “Saudi Arabia said it will help meet world oil demand if President Donald Trump’s Iran sanctions create shortfalls, but analysts say it will do so only in conjunction with Russia, and the world may have to get used to higher prices as a result.”