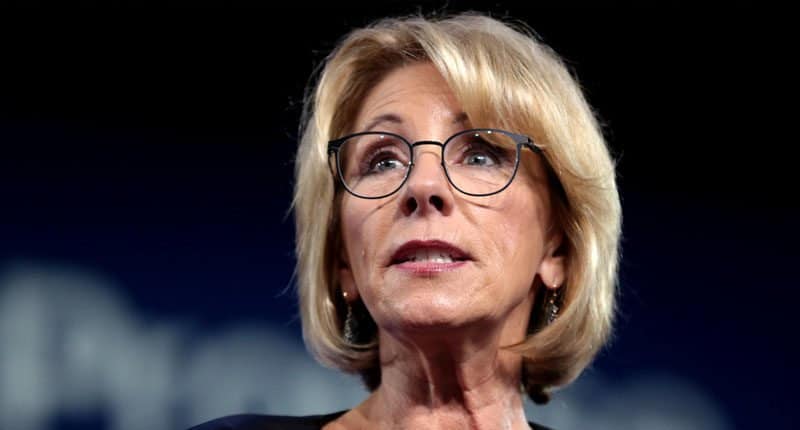 US Secretary of education Betsy DeVos

Fraudulent for-profit schools could make a comeback as investigations have been thwarted according to current and former employees who say DeVos education department has reassigned staff and shifted focus from the investigations into other matters.

Several of DeVos’ top recent hires have previously worked at the very institutions in question.

The investigative team started in 2016 towards the end of the Obama administration, was sifting through job placement claims, advertising and recruitment practices at several schools including DeVry Education Group.

After Julian Schmoke, a former dean at DeVry was hired as the team’s new supervisor, the investigation stopped.

After the collapse of the for-profit Corinthian Colleges, an investigation was launched setting off multiple complaints from students about predatory activities at for-profit schools.

The institutions had been accused of widespread fraud ranging from misrepresenting enrollment benefits to job placement rates to program offerings. The effects of which could potentially leave students with massive debt and no degrees.

In 2016 DeVry paid $100 million as part of a settlement with the Federal Trade Commission for misleading ads about employment success rates and income levels.

The Justice Department investigated Bridgepoint over its handling of private student loans, also in 2016, to which the Consumer Financial Protection Bureau forced the company to forgive some student debt.

The settlement applied to three separate lawsuits — two class-actions and a fraud case. The $25 million deal includes payouts to more than 6,000 Trump U students who paid thousands of dollars for courses they described as worthless.

Attributing the reduction of strength in the examination, Education Department spokeswoman Elizabeth Hill said, “conducting investigations is but one way the investigations team contributes to the department’s broad effort to provide oversight.” She said that none of the new employees who had previously worked in the for-profit education industry had influenced the unit’s work.

Aaron Ament, a former chief of staff to the office of the department’s general counsel who helped create the team, said it had been intended to protect students from fraudulent for-profit colleges. “Unfortunately, Secretary DeVos seems to think the colleges need protection from their students,” said Mr. Ament, who is now president of the National Student Legal Defense Network.

The shift away from the investigation is the latest example of DeVos’ attempt to draw back regulations and investigations that were launched by the department under President Barack Obama, citing government overreach.

DeVos also suspended Obama-era protections last year for students who borrow money or attend for-profit colleges who are later unable to find employment also known as the borrower defense to repayment and gainful employment rule. DeVos said the rule created a “muddled process that’s unfair to students and schools and put taxpayers on the hook for significant costs.”