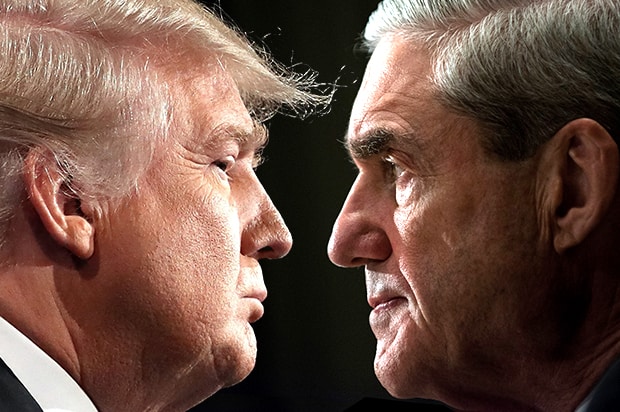 The special counsel’s investigation is entering its second year. Venting on Twitter, Trump suggested he was innocent of any wrongdoing, blamed allegations of Russian collusion on the Democrats and congratulated the nation.

Congratulations America, we are now into the second year of the greatest Witch Hunt in American History…and there is still No Collusion and No Obstruction. The only Collusion was that done by Democrats who were unable to win an Election despite the spending of far more money!

Mueller has yet to charge any Democrats, and no evidence has come to light that Democratic Presidential candidate Hillary Clinton colluded with Russian agents.

The special counsel has levied charges against four people associated with the Trump campaign, 13 Russian citizens and three Russian companies.

Dutch citizen and son-in-law of a Russian based billionaire Alex van der Zwaan plead guilty to lying to prosecutors in February. He was the first person to be sentenced in the Mueller investigation. Van der Zwaan is currently serving a 30-day sentence at a federal prison in Pennsylvania. He’s scheduled to be released on June 4.

Trump’s deputy campaign chairman Rick Gates plead guilty to financial fraud and lying to investigators in February and is cooperating with Mueller’s team.

Three Russian companies and 13 Russian nationals were indicted in Washington DC by a grand jury for conducting information warfare against the United States in the 2016 Presidential election.

The special counsel’s investigation has shed light on shadowy relationships between Trump campaign associates and Russian citizens connected to the Kremlin and Russian President Vladimir Putin.

Robert Mueller and his investigators also corroborated the conclusion of multiple US intelligence agencies that Russian operatives meddled in the 2016 Presidential election. Russians successfully influenced the US voting electorate by sowing discord and animosity online and distributing disinformation through popular social media platforms. The goal was also to tilt the contest in Donald Trump’s favor.

Mueller has yet to answer two fundamental questions. Did the Trump Administration participate in Russia’s efforts to interfere with and sway the US election? Did President Trump intentionally obstruct justice in his efforts to shut down the special counsel’s investigation?

Barring direct interference from the President, the investigation is expected to continue into 2019.

Paul Manafort will stand before juries in Alexandria, Virginia and Washington DC. Muller’s team will remain active through both sets of proceedings and any other cases brought to trial.

Trump continued to lash out on Thursday.

He accused President Obama of spying on his campaign.

Wow, word seems to be coming out that the Obama FBI “SPIED ON THE TRUMP CAMPAIGN WITH AN EMBEDDED INFORMANT.” Andrew McCarthy says, “There’s probably no doubt that they had at least one confidential informant in the campaign.” If so, this is bigger than Watergate!

In lieu of Mueller’s investigation, the President defended his Administration’s record on Thursday. Trump said the investigation is illegal and his successes are historically unprecedented.

Despite the disgusting, illegal and unwarranted Witch Hunt, we have had the most successful first 17 month Administration in U.S. history – by far! Sorry to the Fake News Media and “Haters,” but that’s the way it is!