Trump Blames Democrats For His Inhumane Policy At The Border 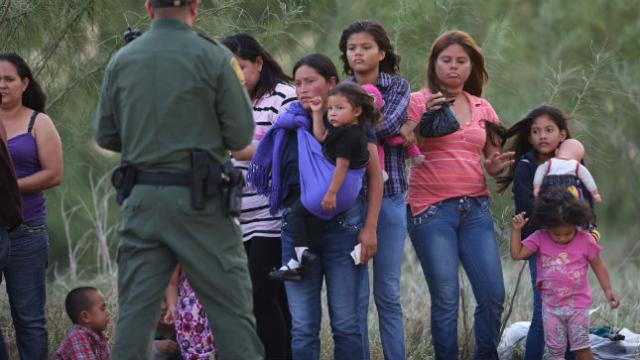 In a Saturday morning tweet, last weekend President Donald Trump blamed Democrats for his Administration’s policy of separating migrant children from their parents who cross the border illegally.

Put pressure on the Democrats to end the horrible law that separates children from there parents once they cross the Border into the U.S. Catch and Release, Lottery and Chain must also go with it and we MUST continue building the WALL! DEMOCRATS ARE PROTECTING MS-13 THUGS.

This isn’t the first time the President attributed his immigration, policy initiative to the Democrats. Last week Trump said, “The Democrats gave us that law. It’s a horrible thing we have to break up families.”

Trump’s Attorney General Jeff Sessions announced the implementation of the policy at a law enforcement conference earlier this month.

“If you are smuggling a child then we will prosecute you, and that child will be separated from you as required by law,” Sessions said. “If you don’t like that, then don’t smuggle children over our border.”

Sessions reversed an earlier precedent that children would remain with their parents in shelters while waiting for deportation or asylum proceedings to be completed.

Earlier this month, Homeland Security Secretary Kirstjen Nielson ordered her department to refer all immigrants who cross the border illegally to federal prosecutors.

At a White House meeting on sanctuary cities in May Trump blamed Democrats for current immigration law. He told Nielson, who was in attendance at the meeting that she is “breaking up families because of the Democrats.“I know what you’re going through right now with families is very tough, Trump said. “The Democrats gave us that law and they don’t want to do anything about it. They’ll leave it like that because they don’t want to make any changes. And now you’re breaking up families because of the Democrats. It’s terrible.”

The Trump Administration has been under pressure, and increased scrutiny since Acting Assistant Secretary of the Department of Health and Human Services Steven Wagner testified before Congress last month. Wagner admitted that Federal officials could not account for the whereabouts of 1,474 migrant children who were separated from their parents.

Wagner said that the Office of Refugee Resettlement, an arm of HHS, tried to contact the sponsors of 7,635 migrant children from October to December 2017. Just over 6,000 children were still living with their sponsors and eighty-five either ran away, were deported or relocated.

The remaining 1,475 children cannot be accounted and may be victims of human traffickers who posed as relatives to become sponsors.

Although Sessions’ “zero tolerance” directive was initiated well after Wagner’s testimony on Capitol Hill, an additional influx of children into an already taxed system is worrying.

The legislation would allow parents to coordinate care for their children before being taken into custody and would permit regular phone calls and contact visits. It would also require Immigration and Customs Enforcement agents consider the children’s best interest when coordinating parent’s detention requirements.