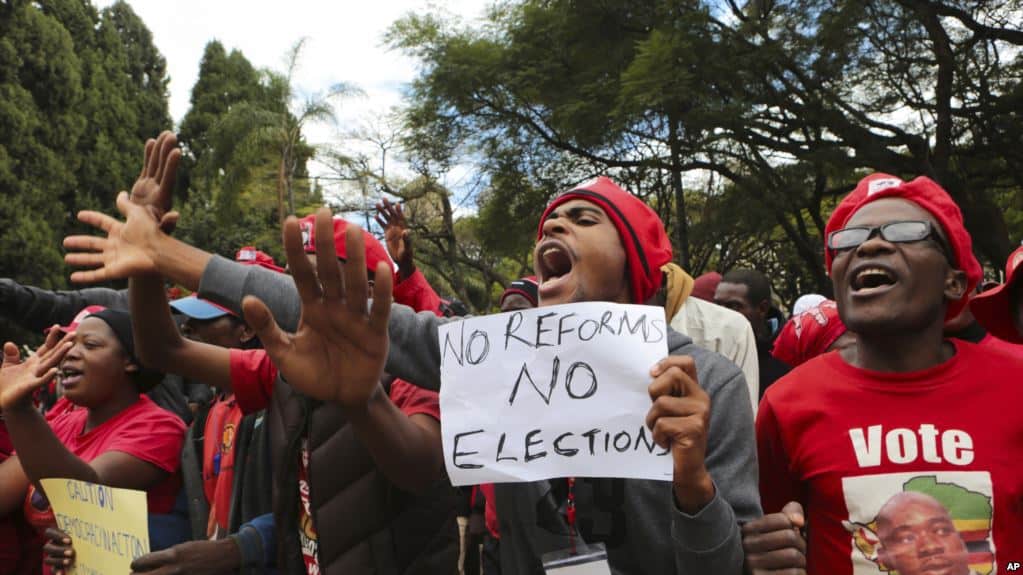 Ahead of the forthcoming July 30th Zimbabwe’s elections, everybody is talking, the streets of Harare, the nation’s seat of power  are bubbling with activities- but the line between expectation and fear of the unknown is getting fuzzier- as observers await what becomes of the Southern African nation after Robert Mugabe’s tumultuous power transition.

That change is the only constant thing in life is a maxim; many are at home with. But for many Zimbabweans, the concern is not changing itself; it is the outcome of change. Ahead of the country’s forthcoming national elections, there are mixed feelings among citizens of the country over what becomes of their nation after the exercise.

All things being equal, Zimbabwe will elect a new president as well as a new parliament to oversee the affairs of the country on July 30th, following a forceful take over of power from immediate-past president Robert Mugabe, 93, who ruled the nation for almost four decades.

The Zimbabwe government consists of an elected head of state, the president, and a legislature. The presidential term lasts for five years and is elected by a majority, with a second round if no candidate receives a majority in the first round. The Parliament is bicameral, consisting of the House of Assembly and Senate.

Why a new election?

In November 2017, Mugabe, one of Africa’s oldest serving heads of state, came under several attacks. Many wanted his resignation. The country’s dominant political party, Zimbabwe African National Union-Patriotic Front, Zanu-PF, had given him (Mugabe) the boot, ordering him to quit office with immediate effect. After this, the country’s parliament had also swung into action, kickstarting an impeachment process to impeach the out of favor president.

However, Mugabe had remained unruffled by the various threats, vowing to hang on to power, until he clocks 100. But in a dramatic turn of events, the country’s military had invaded Harare, the country’s capital and seat of power, and place Mugabe under a ‘house arrest.’ International observers contend the military action has elements of a coup.

But Zimbabwean military, in a televised broadcast to the nation, after its shocking move, dismissed claims of a coup. Major General Sibusiso Moyo, one of the country’s topmost army officer, had said the military exercise was targeted at ‘criminals.’

‘This is not a military takeover of government,’ Moyo had countered claims a military coup in the country, in the televised broadcast.

Mugabe never survived the storms that erupted with the military exercise, and that ended his reign. Many have attributed Mugabe’s fall to his succession plans which were designed towards making his wife, Grace Mugabe, succeed him when he vacates office. He (Mugabe) had earlier dismissed his Deputy, Emmerson Mnangagwa, to perfect his plans. But the move had backfired.

Before his infamous ouster from the government, Mugabe had been at the helm of the country’s political affairs since it gained independence from the UK in 1980. His plans to keep the country’s political power under his firm grips, however, raised specks of dust- a development many said fueled the widespread apathy that characterized the twilight of his reign in Zimbabwe.

Shortly after Mugabe was ousted from power, there was wild jubilation across the country. “We are going to have a good life; we are looking forward to Christmas, because of what has happened (referring to military’s take over of power from Mugabe)” an excited woman had told BBC few minutes after the news filtered across the country.

In search of a new president

Talks of who succeeds Mugabe’s in the forthcoming election are rife. The election, which is the first in the country, in the post-Mugabe era, is generating mixed feelings- expectations on one side and trepidation on the other.

On May 30th, Mnangagwa had taken to his Twitter handle to announce July 30th as the election day for the country.

“I am delighted to proclaim July 30 as the date for the 2018 harmonized elections. These elections will be free, fair and transparent, and the voice of the people will be heard. I call on all candidates to campaign peacefully and focus on the issues that really matter,” he had disclosed.

While Mugabe’s tenure had been widely criticized for its alleged high-handedness, and inability to take a nose-dived Zimbabwe’s economy since 2000 out of the woods, whether his successor would meet the rising expectations remain a concern.

As it stands, Emmerson Mnangagwa, the country’s present interim president is being tipped by many to emerge victorious at the polls. This is given the fact that he enjoys a huge fan base as well as the strength of his political party, Zanu-PF, which has remained a dominant force in the country’s elections for years.

Code-named “Crocodile” for his political ability to navigate the deadliest situations unscathed, Mnangagwa, needs no introduction in the country’s political history. He was one of the country’s strong veterans who spearheaded the liberation struggle, and Mugabe’s loyalist for years.

However, the development has been generating concerns in some quarters. Going by his leadership acumen, many doubt Mnangagwa’s ability to chat a new course for the country, should he emerge the winner at the polls.

Also, the fear of Mnangagwa, becoming power-intoxicated like Mugabe is another concern.  During Mugabe’s 37-year-rule, allegations of election rigging were a common phenomenon, mainly due to his quest to hold on to power at all cost. For instance, Zimbabwe was suspended as a member of the Commonwealth bloc in 2002 because evidence emerged that Mugabe, who had ruled the country since independence in 1980, rigged his re-election in 2002.

No electoral reforms, no election

One major issue heating up the streets of Harare, Zimbabwe’s capital and other parts of the country is calling for electoral reforms, before the forthcoming polls. At the heart of the campaign is Movement for Democratic Change, the country’s main opposition party. Several thousand people thronged the streets of Harare to participate in a peaceful protest staged by MDC, on Tuesday with placards reading, “No to bogus polling stations” and “Free and fair elections,” according to local media sources.

The peaceful protest ended with a march to the Zimbabwe Electoral Commission’s, ZEC, offices where they presented a petition of 19 demands, including that the opposition is given the right to scrutinize the voters’ roll and enjoy equal access to the media and that military personnel is recalled from rural areas.

MDC’s worry, many observed, is the lack of confidence in ZEC to hold a free and fair election in the country, going by what transpired in previous years. The party’s leader and Mnangagwa’s main rival, in the July 30th poll, Nelson Chamisa, has already been talking tough, vowing to resist any form of rigging during the much-anticipated election. Although the opposition party premised its participation in the election on the grounds that its demands are met, what will happen if they are not met remains unknown.

“It is self-evident that the Zimbabwean authorities and the ZEC lack the desire, ability and political will of conducting a free, fair, credible election,” he was quoted to have said while addressing a crowd during the peaceful protest.