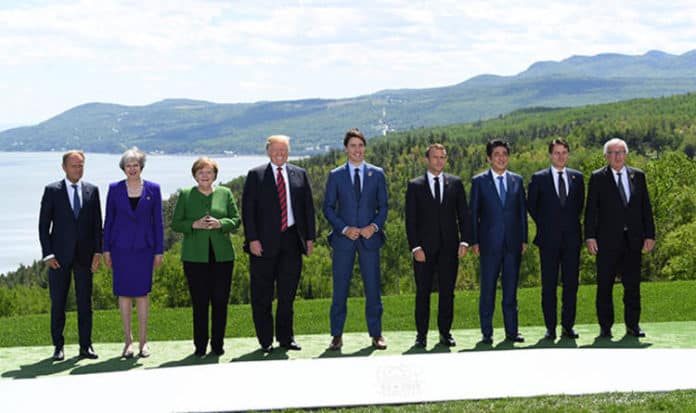 Before leaving for the G7 Summit in Quebec, Canada President Trump ratcheted up already simmering tensions with world leaders who will attend the event.

Heads of state from members nations, all allies of the United States, are still roiling from Trump’s recent announcement that he will no longer exempt their countries from global tariffs imposed on aluminum and steel imports.

Trump said, “We’re going to deal with the unfair trade practices. If you look at what Canada, Mexico, the European Union, all of them have been doing to us for many, many decades, we have to change it. And they understand it’s going to happen.”

Mexico is not a member of the G7.

Running behind schedule and speaking to reporters on Friday Trump said Russia should be readmitted to the annual function.

“It used to be the G8 because Russia was in it. But now Russia is not in it,” Trump said. “Now I love our country. I have been Russia’s worst nightmare. If Hillary got in, I think Putin is going, ‘man I wish Hillary won.’ Because you see what I do, but, that being said, Russia should be in this meeting. Why are having a meeting without Russia being in the meeting?”

Russia was suspended from the yearly conference by a majority of the member nations in 2014 after it forcefully annexed Crimea.

Most G7 countries, as well as Kremlin spokesman Dmitry Peskov, quickly rejected the idea. “Russia is focused on other formats, apart from the G7,” Peskov said.

Italy’s new Prime Minister Giuseppe Conte tweeted support for Trump’s suggestion. Conte wrote, including Russia would be “in the interests of everyone.”

Trump arrived late to the conference on Friday and missed his first scheduled face-to-face meeting with French President Emmanuel Macron.

Trump and Macron’s bromance may have soured in recent weeks. When Macron visited the White House Trump showered the French leader with accolades, hugs, and handshakes.

In a Thursday afternoon tweet, Macron threatened to exclude the US from a multilateral trade deal with member states.

Macron wrote, “The American President may not mind being isolated, but neither do we mind signing a six-country agreement if need be. Because these six countries represent values, they represent an economic market which has the weight of history behind it and which is now a true international force.”

“Please tell Prime Minister Trudeau and President Macron that they are charging the U.S. massive tariffs and create non-monetary barriers. The EU trade surplus with the U.S. is $151 Billion, and Canada keeps our farmers and others out. Look forward to seeing them tomorrow”, Trump wrote. “Prime Minister Trudeau is being so indignant, bringing up the relationship that the U.S. and Canada had over the many years and all sorts of other things…but he doesn’t bring up the fact that they charge us up to 300% on dairy — hurting our Farmers, killing our Agriculture!”

NBC News reported on Friday evening that “the tension appeared to ease a little bit Friday evening, as Trump and Trudeau sat down for a one-on-one session.”

Trump joked, “Justin has agreed to cut all tariffs, all trade barriers.” Playing along, Trudeau replied, “I’d say NAFTA is in good shape.”