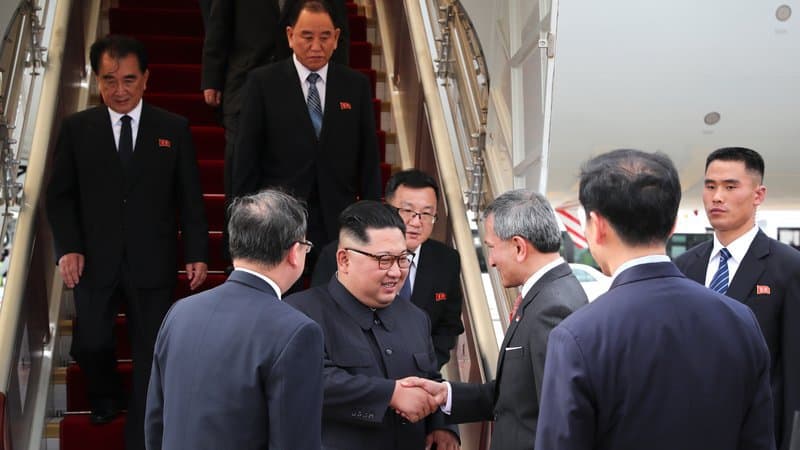 Enemies since the 1950-1953 Korean War, United States President Donald Trump arrived in Singapore on Sunday for a monumental summit with North Korean leader Kim Jong Un — a meeting that could lay the framework for bringing an end to the long-standing nuclear standoff between the two countries.

Trump and Kim are scheduled to meet on Tuesday at Sentosa, a resort island off Singapore’s port.

Comprised mostly of Soviet-built planes, North Korea’s flight-worthiness fleet raised questions as Mr. Kim arrived on a Chinese aircraft. This is the furthest he has journeyed since he took power in 2011.

Both leaders were greeted by Singapore Foreign Minister Vivian Balakrishnan.

Foreign Minister Ri Yong Ho and Kim Yong Chol, a close aide of Kim who has been instrumental in the summit planning traveled in Kim’s entourage. His younger sister, Kim Yo Jong, was also noticed to be amongst those in his delegation.

Nearly derailing the summit last month, National Security Advisor John Bolton’s unyielding rhetoric infuriated North Korea when he suggested they use a “Libya model” in negotiations. Libya unilaterally surrendered its nuclear program in 2003, but its leader, Muammar Gaddafi, was killed in 2011 by NATO-backed rebels.

Speaking in Canada on Saturday Trump said any agreement at the summit would be “spur of the moment,” downplaying the uncertain outcome of what he coined a “mission of peace.”

Thus far Washington has eschewed promising economic assistance but has hinted aid could come from South Korea, China, and Japan if Pyongyang agrees to denuclearize. The Trump administration has already stated it has zero intention of sending forces into the country and is not seeking a “regime change.”

In a pair of tweets on Saturday, President Trump upended two days of global economy diplomacy retracting his endorsement of the final G7 joint statement with America’s allies — threatening to escalate a trade war.

Trump made a swift, early exit from the G7 summit in Canada and from aboard Air Force One chastised Justin Trudeau, accusing the prime minister of making false statements.

Momentarily after Trudeau’s government released the joint statement, noting it had been agreed to by all seven countries, Mr. Trump blew up the cordial impression on twitter to show his displeasure.

“PM Justin Trudeau of Canada acted so meek and mild during our @G7 meetings only to give a news conference after I left saying that, ‘US Tariffs were kind of insulting’ and he ‘will not be pushed around.’ Very dishonest & weak. Our Tariffs are in response to his of 270% on dairy!” the U.S. president tweeted.

“Based on Justin’s false statements at his news conference, and the fact that Canada is charging massive Tariffs to our U.S. farmers, workers and companies, I have instructed our U.S. Reps not to endorse the Communique as we look at Tariffs on automobiles flooding the U.S. Market!” 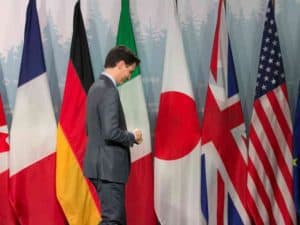 In his press conference, Trudeau had spoken of retaliatory measures that Canada would take next month in response to Trump’s decision to slap tariffs on steel and aluminum imports from Canada, Mexico, and the European Union. He announced at the conclusion of the G-7 summit in Canada that the retaliatory tariffs will go into effect July 1.

Trudeau said he told Mr. Trump “it would be with regret, but it would be with absolute clarity and firmness that we move forward with retaliatory measures on July 1, applying equivalent tariffs to the ones that the Americans have unjustly applied to us.”

“Canadians, we’re polite, we’re reasonable, but we also will not be pushed around,” Trudeau said.

According to Reuters, Trudeau’s office released a statement after Mr. Trump’s tweeted saying “the prime minister said nothing he hasn’t said before — both in public and in private conversations with the president.”

Mr. Trump, who declared the tariff’s as the most important topic at the G7 summit, arrived late and left early, accused the ally nations of what he interprets as them taking advantage of the U.S.

He went on to state other nations have been treating the U.S. like a “piggy bank that everyone is robbing,” and continued to remind those planning to retaliate against the U.S. would be making a “mistake.”

Prior to his departure, during an impromptu news conference at the G7 summit in Canada on Saturday, Mr. Trump said his ultimate goal was the elimination of all trading duties.

“Ultimately that’s what you want,” he said. “You want a tariff-free. You want no barriers. And you want no subsidies. Because you have some cases where countries are subsidizing industries, and that’s not fair.”

Last week the U.S moved ahead with a 25 percent import tax on steel and a 10 percent tax on aluminum on most countries. The United States’ closest trading partners — the European Union, Canada, and Mexico have vowed to impose retaliatory tariffs on scores of U.S. commodities in the coming weeks.

Defined as protectionist and a threat to the global economy, G7 leaders, had intended to use the summit to confront Trump on the tariffs.

Trump said he discussed the idea of eliminating tariffs with his G7 counterparts.

“I did suggest it … I guess they are going to go back to the drawing board and check it out,” Trump said. “The relationships are very good,” he added, mentioning his discussions with French and Canadian leaders specifically.

According to the latest data from the World Bank, global tariffs are close to their lowest levels ever, averaging around 2.9 percent and have been falling for decades due to free trade agreements.

Six people have been accused of involvement in trafficking and smuggling Libyan migrants by the United Nations Security Council. The sanctions were imposed after a video displaying African migrants being sold as slaves sparked global outrage last year.

The head of the regional coast guard unit is among one of the four Libyans charged, along with two Eritreans.  The sanctions, unprecedented for leaders of trafficking networks came off the heels of the widespread international outrage when the CNN television network broadcast photos of immigrants being auctioned off in a modern-day slave market in the suburbs of the Libyan capital. 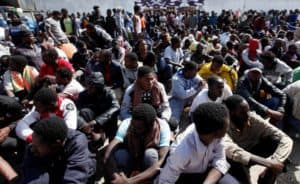 African migrants in a detention camp in Libya

According to the New York Times, the United Nations called Mr. Ghermay “one of the most important sub-Saharan actors involved in the illicit trafficking of migrants in Libya.”

The sanctions go into effect immediately.

“Last fall, images of migrants being sold as slaves in Libya shocked our conscience, and the Security Council vowed to take action,” Nikki Haley, the American ambassador to the United Nations, said in a statement. “Today’s sanctions send a strong message that the international community is united in seeking accountability for perpetrators of human trafficking and smuggling.”

The Security Council, under a sanctions regime set up in 2011, can impose a global asset freeze and travel ban on “individuals and entities involved in or complicit in ordering, controlling, or otherwise directing, the commission of serious human rights abuses against persons in Libya.”

After the NATO-backed upsizing in 2011, Libya became a primary conduit for human trafficking. The revolt led to the defeat and killing of Co. Muammar el-Qaddafi during which the country fell into chaos as Islamic State militants gained a foothold while two competing governments backed by militias raced for control of the oil-producing nation.

The United Nations Secretary-General, António Guterres, in a tweet on Friday, said  “we were all horrified by pictures of human beings for sale in Libya last year. I welcome the Security Council’s decision to sanction six traffickers and smugglers.”

“There must be accountability for exploitation and human rights abuses,” he added.

The African Union suggest between 400,000 and 700,000 migrants were held in more than 40 detention camps across the country as of last December.

Sanctions are intended to be a last resort when it comes to addressing massive human rights violations, curbing illegal smuggling or circumventing extremism groups.

Under Article 41 of the UN Charter, Chapter VII, the council can use enforcement measures not including weapons such as “complete or partial interruption of economic relations and of rail, sea, air, postal, telegraphic, radio, and other means of communication, and the severance of diplomatic relations.”

The unsealed indictment included new accounts against Manafort and aide Konstantin V. Kilimnik, a Russian Army-trained linguist, for tampering with witnesses in regards to their lobbying for Ukraine.

For more than a decade Mr. Kilimnik, 48, served as Mr. Manafort’s right-hand man in Ukraine. Mr. Kilimnik is said to have worked on behalf of Viktor F. Yanukovych, the country’s Russia-aligned former president.

Manafort and Kilimnik have been charged with alleged obstruction of justice and conspiracy to obstruct justice as it pertains to related contacts with two witnesses, their indictments revealed.

Manafort, who awaits trial on charges related to his oversees lobbying work, pleaded not guilty to a litany of charges, from money-laundering to failing to register as a foreign agent, to a bank and tax fraud.

The new allegations are the first in Mr. Manafort’s case drawn against someone accused of having ties to Russian intelligence. Mr. Manafort’s lawyers, as well as Mr. Trump’s allies, contest Mr. Mueller has wandered outside his remit of investigating Russian election interference.

According to the Associated Press, the witnesses had worked with Manafort as he represented a pro-Russian political party in Ukraine. They told the FBI they believed Manafort and Kilimnik were trying to get them to lie about the nature of their work.

The new allegations are said to be unrelated to Manafort’s work on the Trump campaign or involve Russian election interference – a note the President has redundantly stated as he attempts to distance himself from his former top advisor.

After federal agents found Manafort had ghostwritten an opinion piece in Ukraine even though he was under a gag order, Jackson gave Manafort a pass and let him remain under house arrest.  Kilimnik was also involved in that episode.

During a press question and answer prior to boarding Air Force One en route to the G7 summit on Friday, Mr. Trump dismissed any discussion of pardoning Manafort or his personal attorney, Michael Cohen, who is under investigation by federal prosecutors in New York.

“They haven’t been convicted of anything. There’s nothing to pardon. It is far too early to be thinking about it,” Trump told reporters.

Kilimnik is the 20th person to be charged so far in Mueller’s investigation. Prosecutors say he lives in Moscow.

He has previously declined to comment on the allegations and denied being connected to Russian intelligence agencies. As of Friday, he was not in U.S. custody.