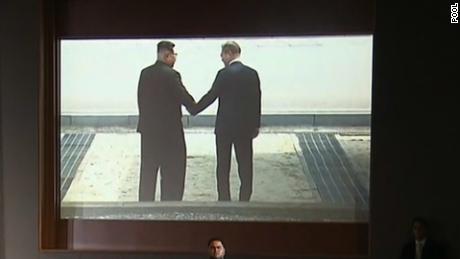 Trump presented the video to Kim during their summit on Tuesday. The clip was also presented to Korean and US journalists at a subsequent press conference.

Trump said the faux movie trailer was a success. “I showed it to him today, actually during the meeting, toward the end of the meeting, and I think he loved it,” Trump told reporters. “That could very well be the future.”

The video opens with a Hollywood-like, animated logo, “A Destiny Pictures Production” and segues it into a series of semi-dizzying montages designed to suggest Trump and Kim can “change the course of history.”

After a bit of blabber about “times of relative peace and times of great tension,” the video says, “There comes a time where only a few are called upon to make a difference.”

The trailer immediately cuts to footage of Kim standing and waving and Trump speaking from the podium at a joint session of the US Congress.

“Out of the darkness can come the light and the light can burn bright,” the video says.

Without warning, the sublime devolves into the ridiculous.

The faux movie trailer fades to black. The animated Destiny Pictures logo zooms itself in and fills the screen.

“Destiny Pictures presents a story of opportunity. A new story. A new beginning. One of peace. Two men, two leaders. One destiny” said the video.

Cut to a split screen with an image of a smirking US President giving the thumbs on the left and a smiling North Korean leader waving to an adoring crowd on the right.

The video goes on to suggest that Kim will be presented with “one chance, that may never be repeated.” Will Kim choose the “path of vision and leadership……or not!”

The borderline, amateur cinematic silliness continues as Kim is presented with a choice. He can either go back to his bombs and warplanes or he can move forward. He can dive right into a Trump inspired, national utopia.

Apparently, the video suggests this might include a Jesus-like heard of wild horses running on top of an open body of water. This is undoubtedly the first time the American or Korean people have been introduced to horses that not only walk on water but run.

Not only will Kim and his people receive divine horses, but the video also promises “investment from around the world,” “medical breakthroughs,” “an abundance of resources,” “innovative technology,” “and new discoveries.”

According to video, all Kim has to do to receive these generous achievements of goodwill is “shake hands with peace.”

The video cuts to footage of Trump holding up his hand and waving.

The North Koreans are masters of video propaganda. It’s hard to believe Kim Jong Un, educated in Switzerland and North Korean universities, perceived the absurd trailer as anything other than laughable.

In the event Kim was taken in by the clip, it might be worth his time to preview another digitized, Trump inspired propaganda video: