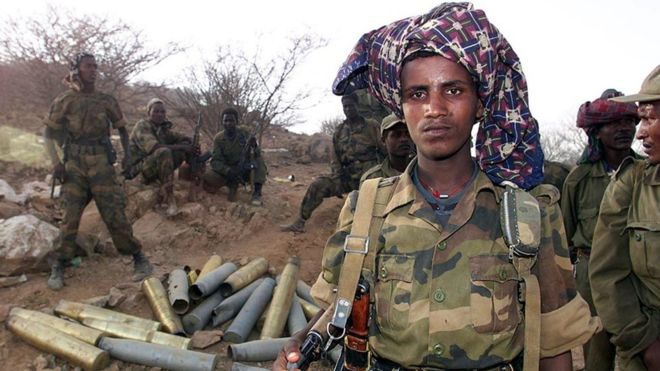 Ethiopia soldiers at the disputed border

For long, talks of ending the fractured relationship between Ethiopia and Eritrea have been sacrificed on the altar of propaganda and superiority tussle. However, whether recent move to bring the age-long feud to an end would see the light of the day remains a puzzle no one can decipher.

Two years of war, an estimated 100, 000 deaths recorded and more than a million people displaced; the 1998-2000 war between Eritrea and Ethiopia is considered the deadliest to have been fought on the African continent.

In 1998, the two nations had engaged each other in a bloody war over Badme, a piece of land located at the border. Both of them had laid claim to the land, and the unwillingness of either side to throw in the towel on the issue led to the war. Many, however, christened the war as ‘senseless,’ considering the reason that birthed it. To this school of thought, the land issue cited as the causative factor of the war was a mere ruse to sway observers and the international community.

In April, Abiy Ahmed became Ethiopia’s new Prime Minister. While he is yet to clock 100 days in office, his strides towards repositioning the war-torn country have drawn the applauds of many- locally and offshore. In the last two months of his government, he has trawled new policies aimed at taking Ethiopia’s economy out of the woods and generally charting a new course forward for the country’s political landscape. Under his watch, Ethiopia lifted its state of emergency imposed on February 16, 2018, following the shocking resignation of immediate past Prime Minister, Hailemariam Desalegn.

So far, however, his topmost achievement has been a recent move by his government to end the bruised relationship between Ethiopia and Eritrea.  His commitment to open a new chapter between the two nations kickstarted right from when he delivered his inaugural speech. While delivering the speech, he urged Eritrean government to reciprocate his penchant towards resolving the frayed between the two countries citing “the common blood relations between the peoples of the two countries.”

In pursuit of that course, the Prime Minister, had on June 5, 2018, taken the world back, announcing Ethiopia’s full compliance with Algiers Peace Accord signed by the two countries. The Accord, mediated by the African Union, AU, the United Nations and the United States was designed to end the war and foster long-term peace between the two nations by tackling the underlying issues for the antagonism.

“Putting an end to this situation and finding peace is necessary beyond anything else not just for Ethiopia but the wider Horn of Africa,” Ahmed had been quoted as saying after his shocking, but a historical declaration.

After the Accord, which officially ended the war, the Eritrea-Ethiopia Boundary Commission (EEBC) had in 2002 in its binding ruling on the border between the two countries, awarded Badme to Eritrea. Ethiopia, in defiance of the EEBCC’s decision, however, refused to withdraw from the contested territory. This has continued to whip up political anxieties and propensity of another war between the two nations which has been existing in “no war, no peace” situation for years.

This, Ahmed’s government seeks to arrest, but the situation appears even more compounded than it seems. Ethiopia’s recent move towards ending the hostile relationship has been put on hold by Eritrea’s cold stance. Till date, Eritrea has yet to issue a response to Ahmed’s June 5 declaration. The Prime Minister had added after his declaration “Every Ethiopian should realize that it is expected of us to be a responsible government that ensures stability in our region, that takes the initiative to connect the brotherly peoples of both countries and expands trains, buses, and economic ties between Asmara and Addis Ababa.”

Analysts have pegged the development to Eritrea’s distrust in Ethiopian government, based on what happened in previous years. Since the two countries signed the Accord, successive governments in Ethiopia, many believed, have only paid lip service to its full compliance and implementation. The fact that the disputed territory, remains under the grip of Ethiopia, annuls any reason to trust, analysts said. It has therefore been argued in some quarters that Ahmed’s quest to restore peace between the two nations should begin with full compliance to the Algiers Accords, as demanded by Eritrea.

As it stands, it would be a tight-rope walk between the two countries- as none of them is likely to shift ground- due to individual interests. Ahmed may appear hellbent on the peace move with Eritrea but granting full compliance to the Accord, will be, somewhat a mission impossible. Reason: The move could destroy his efforts to build a united Ethiopia and garner massive support for his new government, as the issue is capable of dividing the country’s fragile political bond. This is given that many political bigwigs in the country will likely oppose him, should he decide to comply to the Accord fully.

On the other hand, whether or not Eritrea would reciprocate Ahmed’s efforts for peace remains unknown, but it seems unlikely it would, given its silence on the issue so far.

Nevertheless, given Ahmed’s consistency since he assumed office two months ago, it seems his government is genuine towards ensuring that the peace move pulls through. Most observers who premised their argument on the new prime minister’s doggedness to the course of the issue, have urged Eritrea to accept the offer and `resolve the lingering antagonism between the two countries.

No doubt, should the peace talks between the two nations see the light of the day, it would usher in a new era of opportunities for both of them, politically, economically and other aspects of development.

At the moment, however, where the pendulum of Ethiopia’s peace move would swing remains unknown. And with Eritrea still keeping mum on the matter, time will tell if Ahmed will etch his name on the annals of history as the one to ensure memories of Africa’s deadliest war finally ends on a historical note.