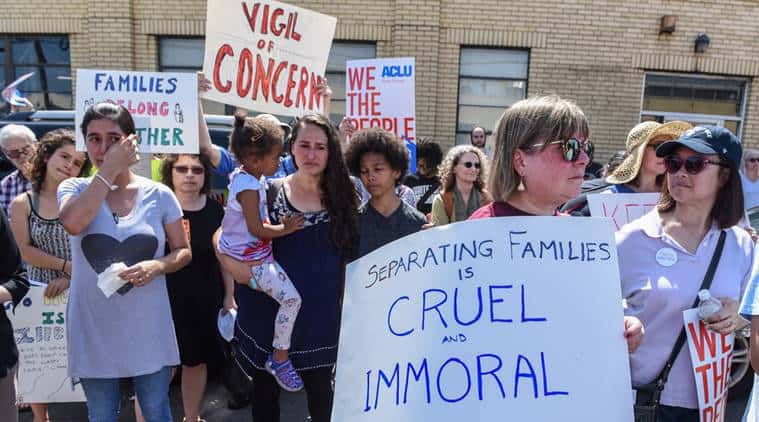 President Donald Trump signed an executive order on Wednesday reminding his policy of separating children and parents at the southern border.

Trump said, “We’re signing on the executive order. I consider it to be a very important executive order. It’s about keeping families together, while at the same time being sure we have a very powerful very strong border.”

CNN reported on Wednesday that Trump, “officially reversed his debunked argument that he had no authority to stop separations of undocumented immigrant families at the border.”

President Donald Trump told reporters earlier that he would take “pre-emptive action” to keep families together at the border.

Trump said, “I’ll be signing something in a little while that’s going to do that. I’ll be doing something that’s somewhat preemptive and ultimately will be matched by legislation I’m sure.”

Trump’s announcement comes as a backlash to the administration’s zero-tolerance policy of separating children at the southern border increases.

A recent Quinnipiac poll shows that two out three voters oppose the separation of children from parents. The survey also found that 55% of Republicans support Trump’s efforts at the border.
In recent days Democratic lawmakers, reporters, and independent mental health professionals visited detention facilities where the children are being held. Sound bites of migrant children crying after separation from their parents as well as images of children in detention camps have fueled bipartisan calls for the President to stop the policy of separation immediately.

Several Republicans, generally hesitant to challenge the president, have criticized the policy.

Senator Ted Cruz, a stark defender of Trump’s position on immigration, announced on Monday he would introduce legislation to speed up asylum case review and end the practice of separation at the border.

Rep. Brian Fitzpatrick (R-Pennsylvania) said, “I firmly detest the heartless and inhumane practice of separating children from their parents at the border. This extreme measure must end. It is an ineffective deterrent against illegal immigration, and children should not have to face traumatic ordeals given the actions of their parents.”

Attorney General Jeff Sessions announced the separation policy in May. The policy requires all migrants who cross the border illegally to be prosecuted immediately and, as per the administration’s interpretation of immigration law, children will be separated from parents.

It’s unclear if the new policy was intended as a deterrent or simply a fundamental application of the standing immigration laws.

Sessions told Fox News host Laura Ingraham on Tuesday, “Yes, I hope people will get the message and come through the border at the port of entry and not break across the border unlawfully.” Sessions also have referred to the policy as an unwavering legal requirement and as a moral obligation rooted in biblical doctrine.

Homeland Security Secretary Kirstjen Nielsen said on Monday the implication that the policy is being used as a deterrent is “offensive.”

“I find that offensive,” Nielsen said. “No. Because why would I create a policy that purposely does that?”

Nielsen doubled down on the assertion that the law requires the administration separate families at the border.

“But the answer is, it is a law passed by the United States Congress. Rather than fixing the law, Congress is asking those of us who enforce the law to turn our backs on the law and not enforce the law,” Nielsen said.

Trump blames the policy he implemented squarely on Democrats. In a Wednesday morning tweet about the issue, Trump wrote, “It’s the Democrats fault, they won’t give us the votes needed to pass good immigration legislation. They want open borders, which breeds horrible crime. Republicans want security. But I am working on something – it never ends!”

Although the executive order may provide the administration a political exit strategy from a crisis it created, it might also create a new legal turmoil.

CNN reported that an order that permits families to stay together as “units” may violate the Flores Settlement.

“Indefinite detention of minors would violate the Flores Settlement because it requires the release to the ‘least restrictive environment’ within 20 days,” according to the network. “If the President acts, it will be challenged immediately. For instance, the parties that secured the Flores Consent decree would go back to the district court and argue that the government is in violation of the court order.”

The administration undoubtedly self-inflicted an unnecessary, ethical wound just as the midterm election, campaign season kicks into high gear. Efforts to repair the damage may exacerbate the political laceration.