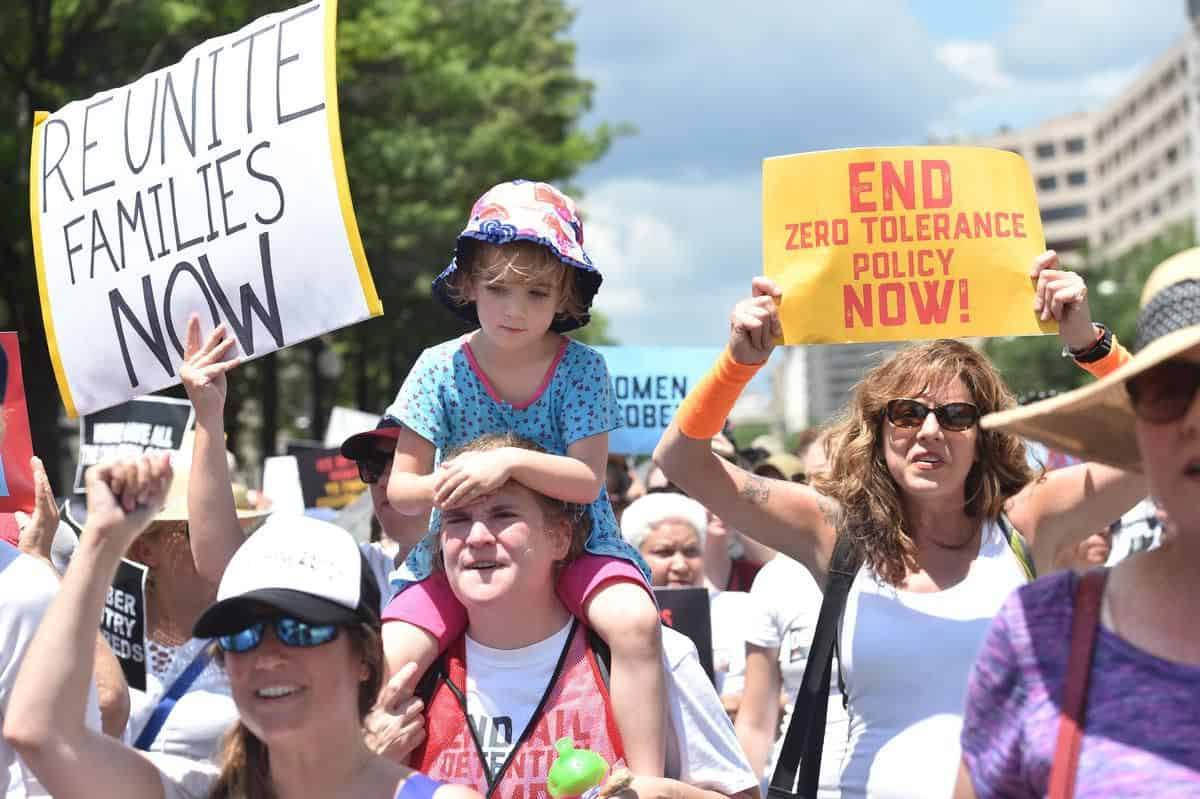 Thousands of people across the United States participated in several hundred marches on Saturday to protest the Trump Administration’s policy of separating migrant children from their parents at the border.

NBC News reported that “The protests, marching under the banner ‘Families Belong Together,’ are hoping to push the Trump administration to reunite thousands of immigrant children separated from their families after crossing into the United States.”

Marches and rallies occurred in coastal cities like New York and San Francisco as well rural towns in Appalachia and Wyoming. “American expats even gathered across from the U.S. consulate in Munich,” according to the network.

Thousands of protestors marched across New York’s Brooklyn Bridge chanting, “Immigrants built this bridge.” When they arrived at ICE headquarters, many yelled “shame.”

The Los Angeles Times reported that “tens of thousands assembled in front of City Hall just before noon in a star-and politician-studded rally that centered around messages of humanity and empathy transcending borders.”

Rally organizers told the Times they were protesting the White House’s policies “criminalizing” migrants, leaving those protected by the Deferred Action for Childhood Arrivals program “in limbo” as well as the separation of children from their parents at the border.

According to the newspaper, one protester yelled, “Human rights should have no border!” at the start of the rally. Children held signs that read, “Familia, si! Trump, no, no, no!” and “Love cannot be stopped.”

In the nation’s capital protestors braved temperatures in the nineties with heat index values approaching 105 degrees.

Actress Diane Guerrero spoke to rally-goers in Washington DC about her parents’ deportation 17 years ago. “I am here today as a woman who as a young child was separated from her family. I am here today to be painfully honest about the damage these government policies do to human beings and to kids,” she said. “Once my family was taken, I became fully aware that my community matters less to some people. That we are treated differently because of the color of our skin or where our parents were born.”

A 12-year old girl from Miami told the crowd about her fears of being separated from her parents. Leah said, “I don’t understand why they are being so mean to us children,” she said. “Don’t they know how much we love our families? Don’t they have a family, too?”

Leah continued, “I live with the constant fear of losing my mom to deportation. My mom is strong, beautiful and brave. She is also a person who taught me how to speak up when I see things that aren’t fair.”

Demonstrators converged on a street corner near the resort holding signs that read: “Do you know where our children are?” and “Even the Trump family belongs together.”

Trump doubled down on his zero-tolerance policy on Saturday afternoon. Trump tweeted,

When people come into our Country illegally, we must IMMEDIATELY escort them back out without going through years of legal maneuvering. Our laws are the dumbest anywhere in the world. Republicans want Strong Borders and no Crime. Dems want Open Borders and are weak on Crime!

“When people come into our Country illegally, we must IMMEDIATELY escort them back out without going through years of legal maneuvering. Our laws are the dumbest anywhere in the world. Republicans want Strong Borders and no Crime. Dems want Open Borders and are weak on Crime!”