Loyalties Are With My Family And Country ~ Michael Cohen 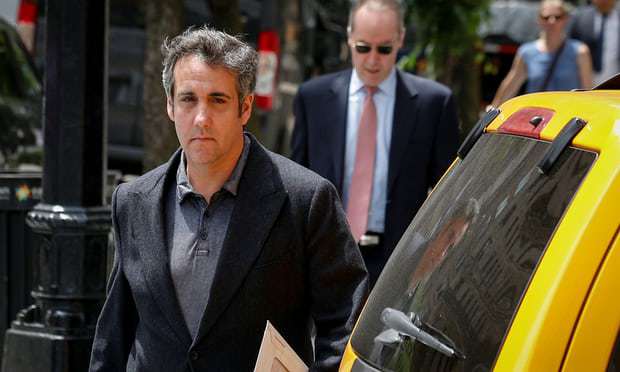 In his first interview since FBI agents raided his home and business, last April Cohen told ABC’s George Stephanopoulos that my family “is my first priority.” Stephanopoulos had asked Cohen what he would do if prosecutors forced him to choose between protecting Trump or his family.

When Stephanopoulos pressed further, pointing out Cohen’s previous statement that he would “take a bullet” for Trump, the President’s former lawyer said, “To be crystal clear, my wife, my daughter and my son, and this country have my first loyalty.”

“Once I understand what charges might be filed against me if any at all, I will defer to my new counsel, Guy Petrillo, for guidance,” Cohen added.

ABC News reported that a joint defense agreement Cohen shared with Trump, which allowed both parties to share information and documents, will no longer be honored when Petrillo assumes his role.

Stephanopoulos asked Cohen how he might react if Trump or his legal team try to discredit him or the work he did for the President. Cohen sat up straight, and his voice gained strength, according to Stephanopolous.

“I will not be a punching bag as part of anyone’s defense strategy,” Cohen said. “I am not a villain of this story, and I will not allow others to try to depict me that way.”

“I respect the prosecutors. I respect the process,” Cohen said. “I would not do or say anything that might be perceived as interfering with their professional review of the evidence and the facts.”

Stephanopolous asked Cohen directly if Trump ordered him to make a $130,000 payment to adult-film star Stormy Daniels. The hush money paid to Daniels, a possible violation of campaign finance law, is certain to be an area of concern for investigators.

Cohen answered, “I want to answer. One day I will answer. But for now, I can’t comment further on advice of my counsel.”

Cohen also threw cold water on the President’s heated rhetoric about the FBI and Robert Mueller’s investigation into collusion and Russian interference in the 2016 election.

“I don’t agree with those who demonize or vilify the FBI. I respect the FBI as an institution, as well as their agents,” Cohen said. “When they searched my hotel room and my home, it was obviously upsetting to me and my family. Nonetheless, the agents were respectful, courteous and professional. I thanked them for their service, and as they left, we shook hands.”

Trump said the FBI raid on Cohen’s office, home, and the hotel room was “an attack on our country, in a true sense. It’s an attack on what we all stand for.”

About the Muller investigation, Cohen said, “I don’t like the term witch hunt.”

“As an American, I repudiate Russia’s or any other foreign government’s attempt to interfere or meddle in our democratic process, and I would call on all Americans to do the same,” Cohen said.

Stephanopolous suggested that Cohen appeared relieved having had an opportunity to tell his story.

“He was visibly relaxed over the course of the interview after telling me — with some understatement — that the last year has been ‘difficult, upsetting and unpleasant,’” said Stephanopolous.