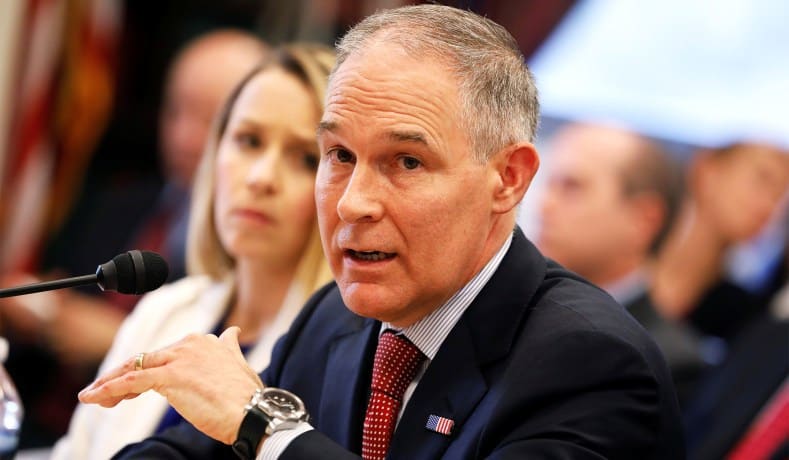 For several months Scott Pruitt, the Environmental Protection Agency Administrator has been the front and center of ethics investigations for outsized security spending, first-class flights, and even a moderately priced condo lease. He tendered his resignation on Thursday.

Pruitt’s resignation letter was released to media outlets and expressed no regret for any action he had taken since heading his post to lead the EPA. His departure comes on the heels of more than a half a dozen federal and congressional investigations.

“It is extremely difficult for me to cease serving you in this role first because I count it a blessing to be serving you in any capacity, but also, because of the transformative work that is occurring,” Pruitt wrote. “However, the unrelenting attacks on me personally, my family, are unprecedented and have taken a sizable toll on all of us.”

I have accepted the resignation of Scott Pruitt as the Administrator of the Environmental Protection Agency. Within the Agency Scott has done an outstanding job, and I will always be thankful to him for this. The Senate confirmed Deputy at EPA, Andrew Wheeler, will…

…on Monday assume duties as the acting Administrator of the EPA. I have no doubt that Andy will continue on with our great and lasting EPA agenda. We have made tremendous progress and the future of the EPA is very bright!

Pruitt, Oklahoma’s former attorney general, was close to the oil and gas industry and during his tenure filed more than a dozen lawsuits against the agency he was picked to lead. After he arrived in Washington, he worked relentlessly to dismantle Obama-era environmental regulations that aimed to reduce toxic pollution and planet-warming carbon emissions.

Pruitt crisscrossed the country on taxpayer dollars, speaking with industry groups and rubbing elbows with GOP donors during his one-year tenure, but showed little interest in listening to advocates he derided as the “environmental left.”

Pruitt mirrored Trump’s skepticism about mainstream climate science and was a severe critic of the Paris climate agreement. When Pruitt moved to boost fossil fuel production and roll back regulations opposed by corporate interests, Trump applauded his efforts.

Pruitt’s resignation follows a series of revelations involving pricey trips with first-class airline seats and a $43,000 soundproof booth for making private phone calls. His demand for  24-hours-a-day protection by armed officers resulted in a swollen 20-member security detail that blew through overtime budgets and racked up expenses of more than $3 million.

Over the course of the last year, Pruitt also had ordered his EPA staff to do personal chores for him.

Pruitt publicly denied any knowledge of massive raises awarded to two close aides. Documents later showed Pruitt’s chief of staff had signed off on the pay hikes, indicating he had the administrator’s consent.

Mr. Pruitt also played a lead role in urging Mr. Trump to follow through on his campaign pledge to withdraw the United States from the 2015 Paris climate agreement.

Mr. Pruitt is the subject of at least 13 federal investigations.