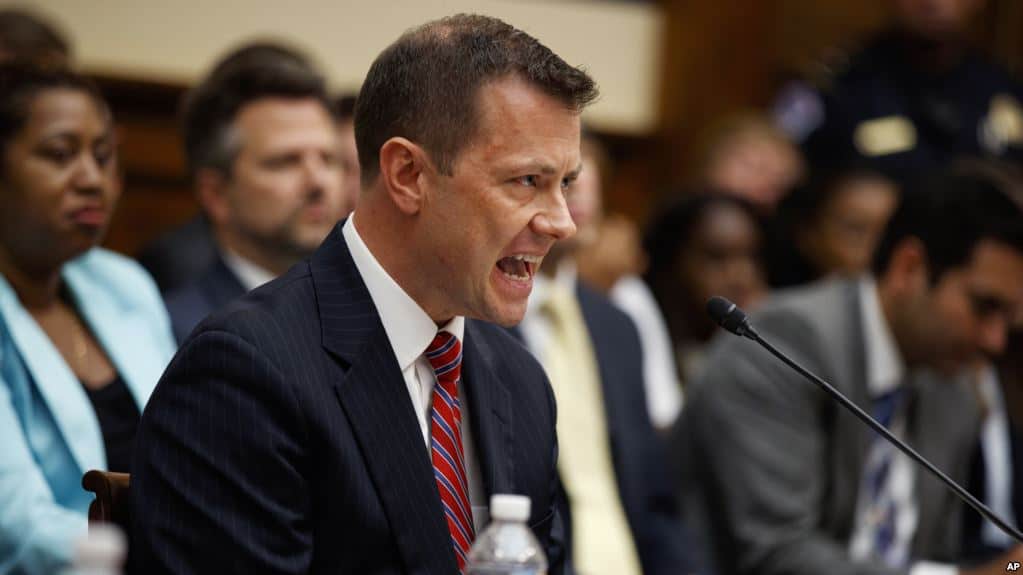 Some of the controversial text messages were critical of then-candidate Donald Trump.

Strzok denied allegations that the political views he shared with Page affected his official responsibilities. He also accused Republicans at a joint hearing of the House Intelligence and Judiciary committees of helping Russian President Vladamir Putin sow the seeds of discord.

“I have the utmost respect for Congress’s oversight role, but I truly believe that today’s hearing is just another victory notch in Putin’s belt and another milestone in our enemies’ campaign to tear America apart,” Strzok said.

In his opening statement, Strzok said he regretted making “blunt” comments about Trump and other prominent political stakeholders.

Rep. Trey Gowdy (R-S.C.) said that in August 2016, shortly after the Department of Justice initiated the Russia investigation, Strzok and Page shared text messages that included “F Trump” and Strozk’s comment, “I can protect our country at so many levels.”

Gowdy said, “We’re not even a week into an investigation that you originated, approved, were the contact  you hadn’t interviewed a single solitary soul until August the 11th, and you’re already promising to protect the country from that menace Donald Trump.”

Strzok responded by suggesting assumptions based on messages taken out of context is an unrealistic assessment of texting.

“To suggest somehow we can parse down the words of shorthand textual conversations like they’re some contract for a car is simply not consistent with my or most people’s use of text messaging,” Strzok said.

Just after Strzok refused to answer a question about the ongoing Russia investigation Republicans threatened to hold him in contempt of Congress. Democrats immediately called the hearing a “circus” and a “political show trial.”

“This is a disgrace,” Gohmert said. “And it won’t be recaptured anytime soon because of the damage you’ve done to the justice system. And I’ve talked to FBI agents around the country. You’ve embarrassed them. You’ve embarrassed yourself. And I can’t help but wonder when I see you looking there with a little smirk, how many times did you look so innocent into your wife’s eye and lie to her about Lisa Page?”

Jeers were heard from members of the committee. Rep. Bonnie Watson Coleman (D-NJ) told Gohmert, “You need your medication.”

After a high volume argument amongst lawmakers and vigorous objections by Gohmert, Strzok was permitted to respond.

“I have always told the truth,” Strzok said. “The fact that you would accuse me otherwise, the fact that you would question whether or not that was the sort of look I would engage within a family member who I have acknowledged hurting goes more to a discussion about your character and what you stand for and what is going on inside you.”