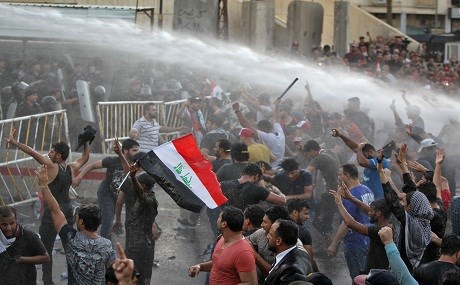 Iraqi protesters chant slogans and wave national flags are being sprayed with water cannon by security forces during clashes at a demonstration against unemployment and a lack of basic services in the capital Baghdad's Tahrir Square on July 20, 2018. Photo: Ahmad al-Rubaye / AFP

Caracal Reports has received word from a source in Iraq that internet access is returning to normal in certain areas, “The internet is back to normal in [city redacted]. Kids are very happy they can go back to watching YouTube, I know my nieces and nephews are,” our source reports.

Earlier in the week, Rudaw reports that the Iraqi government is pulling 18 billion dinars ($15 million) out of the emergency budget to fund projects in Basra and Muthana provinces. The Council of Ministers will dedicate 3 billion dinars ($2.5 million) each to Basra’s operating costs, Umm Qasr water project in Basra, and the Shatt al-Rumaitha water project in Muthana.

The Council also decided to form the provincial reconstruction and services committees, chaired by the prime minister, to assess provincial reconstruction and services and to follow up on citizens’ needs and demands to improve services, accelerate service delivery, and empower the council of ministers to ensure speedy implementation of mentioned duties.

Abadi continued by stating that the biggest corruption Iraq is facing is mismanagement, “We won’t go easy on any official proven to be negligent in their duties. Negligence in many cases is the same as corruption. Corruption is not necessarily extending your hands into public funds. If you don’t carry out your responsibility correctly, this is part of corruption,” he stated.

A member of Iraq’s human rights commision told Rudaw that at least 14 people have died since the protests began approximately two weeks ago. “Security forces have used tear gas, water cannons, and live fire to break up protests that have raged across southern Iraq for over two and a half weeks,” the outlet stated in a report.

The Iraqi authorities need to credibly and impartially investigate the apparent excessive use of lethal force in Basra, even where protests turned violent. So long as the government fails to address protester grievances, the danger of further bloody protests remains real.

HRW investigated eight protests in Iraq and found during six of which, security forces allegedly fired live ammunition and beat at least 47 others. In five of the eight protests, witnesses stated demonstrators threw rocks, gasoline bombs, and burned tired in the direction of security forces. HRW also notes that the government has limited internet access across most of central and southern Iraq.