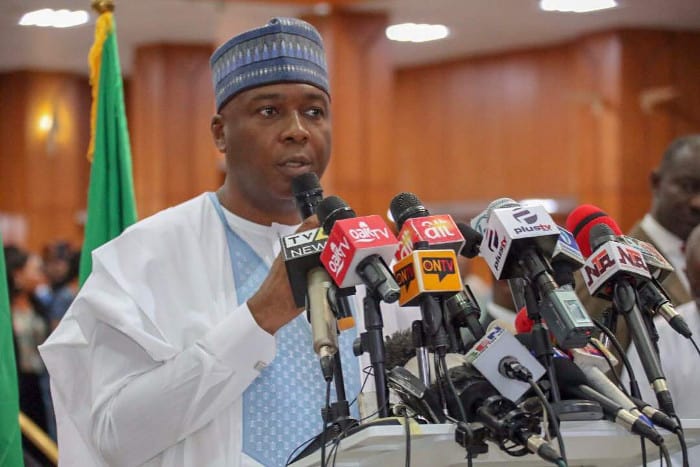 Nigeria’s Senate President, Dr. Bukola Saraki has condemned the invasion of the National Assembly by some armed operatives of the State Security Services (SSS) on Tuesday, saying such was inimical to democratic development in the country.

Saraki stated this during a press conference held at the National Assembly on Wednesday to address controversies trailing the alleged victimization of some lawmakers by the heavily armed security operatives.

Masked security operatives had stormed the National Assembly on Tuesday morning, barring the country’s lawmakers from entering the Assembly’s gates for a designated crucial deliberation.

The lawmakers were, however, granted entrance into the parliament’s building after some open confrontations with the armed security operatives, according to local media sources.

The move was not unconnected to an alleged plot by the All Progressives Congress (APC), to remove Saraki, who recently defected from the ruling party to the country’s main opposition party, the Peoples Democratic Party, (PDP) from being the Senate President; sources claimed.

Since his defection, there have been alleged plots to unseat the Senate President, with some top-figures of the APC claiming he is presently unfit for the position, after dumping the party which won him the office of the nation’s third citizen.

“It is the turn of Saraki to vacate his seat as President of the Senate,” APC’s Chairman, Adams Oshiomole, said Wednesday.

Saraki has, however, remained unfazed by the alleged plots, vowing not to relinquish office as the Senate president.

“I will not give in (to pressure). I will not. I was elected by members,” he responded to a question on his plan on calls for his removal,” the Senate President said on Wednesday.

This, observers argued, informed the recent seizure of the National Assembly.

The development has received condemnations from many describing it as anti-democracy. Acting President, Yemi Osinbajo on Tuesday sacked SSS’s Director-General, Lawal Daura, following the siege laid at the National Assembly.

“The Acting President, Prof. Yemi Osinbajo, SAN, has directed the termination of the appointment of the Director-General, Department of State Services, Lawal Musa Daura, with immediate effect. Mr. Daura has been directed to hand over to the most senior officer of the State Security Service until further notice,” a two-paragraph statement by the Senior Special Assistant to the Acting President on Media and Publicity, Laolu Akande reads.

CARACAL REPORTS gathered that the Acting President was unaware of the invasion, though the security operatives claimed an “order from above informed their action.”

But addressing reporters during the press conference, Saraki revealed why he is not surprised at various happenings in Nigeria’s polity under the President Muhammadu Buhari-led administration, recalling that “about two years ago,” he “stated that there was a government within this government, to a purpose that was not in the interest of what the people voted for.”

“I said it then, and now we are beginning to see the manifestations of that government within a government. It beats one’s imagination how the head of an agency could have authorized the brazen assault on the legislature that we saw yesterday. Despite the threat to our lives, we shall continue to fight impunity and injustice in this country,” he added.

He went on to commend Nigerians and the international community for their unflinching support and doggedness towards sustaining democracy in Nigeria.

Below is the full text of the Senate President’s speech.

STATEMENT BY THE PRESIDENT OF THE SENATE, HIS EXCELLENCY (DR.) ABUBAKAR BUKOLA SARAKI, CON, AT A WORLD PRESS CONFERENCE HELD AT THE NATIONAL ASSEMBLY COMPLEX ON WEDNESDAY, AUGUST 8, 2018.