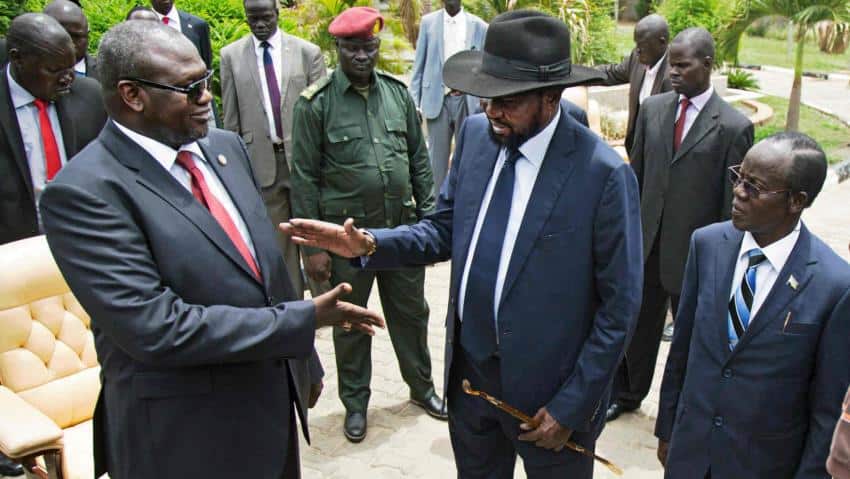 Warring parties in South Sudan recently signed a power-sharing deal to end the country’s lingering crisis, and many are shutting their hearts against any thought of the move collapsing like previous ones.

Nothing is more important to South Sudanese nationals than seeing peace return to their war-torn country. Since their country gained independence from Sudan in 2011, peace has deserted the country, leaving unending tales of agonies behind.

South Sudan’s crisis started in 2013, two years after it gained independence from Sudan, following an allegation by President Salva Kiir that his former and now rebel leader Riek Machar was plotting to oust him from power. This degenerated to a massive political war that has nearly reduced the East African nation to rubbles.

A significant effort towards ending the crisis surfaced on June 27, when both parties inked a permanent cease-fire deal in Khartoum, Sudanese, capital. The deal, reported by CARACAL REPORTS, however, appeared destined to fail a few days later over a power-sharing deal, expected to further cement the deal.

On Sunday, however, optimism returned as both leaders restated their commitment to bring about lasting peace in the country by signing a new power-sharing deal. Kiir and Machar, reached the historic agreement in the neighboring country, Sudan after tons of deliberations.

According to the recent agreement, Machar would return to a unity government as the first of five vice presidents, a position he quitted earlier when things went sour between him and Kiir.

The deal was signed in the presence of Presidents Omar al-Bashir of Sudan, Yoweri Museveni of Uganda, Uhuru Kenyatta of Kenya, and Ismail Oma Ghuelleh of Djibouti.

“The agreement we have signed today must map the road to end the conflict and war in our country,” Kiir announced on Sunday after signing the deal.

“We have to concentrate on the implementation of the agreement, and we have to work on uniting our people,” he added.

The deal is seen as a boost to ongoing efforts to restore peace to the troubled East African nation. It is also a step away from the final one, which will see the rival parties form a transitional government under the new arrangement, which will consequently kick off for a further 36 months.

Based on the recent power-sharing deal, there will be 35 ministers in the bloated transitional government, including 20 Kiir allies and nine backers of Machar along with representatives of other rebel factions.

The recent power-sharing deal has been sparking increased optimism among many South Sudanese, with little or no attention being paid to the failure of similar attempts in the past.

This is not the first time Kiir and Machar would reach such agreement. In August 2015, a similar ceasefire deal was signed by the two East African bitter rivals but did not stand the test of time, collapsing in July 2016, following an outburst between the two in Juba, South Sudan’s capital. Sunday’s deal is the 12th ceasefire and second power-sharing agreement.

With this, the temptation of envisaging similar scenario this time around is seemingly irresistible. Whether Intergovernmental Authority on Development (IGAD), the regional East African bloc which has so far been spearheading the peace talks has something different up its sleeve to ensure that the deal is implemented this around or not remains unclear, at the moment.

And Machar captured this fear shortly after signing the deal. “We have to concentrate on the implementation of the agreement, and we have to work on uniting our people,” he had said.

Another reason to fear over the collapse of the new deal is how to properly represent the interests of all members that make up the opposition camp.

“Not everyone who is fighting has been involved in the process of Khartoum, and not everyone who signed appears to be fully representative of their own parties as well,” Aly Verjee, a visiting researcher at the United States Institute of Peace, told Al Jazeera.

But many South Sudanese are choosing to live above pessimism, this time around, whether the recent deal pulls through or not.

the is good reasons for optimism.

The crisis has taken a huge toll on the country since it began in 2013. Tens of thousands of people have reportedly died while millions of people have been displaced, with no hope of survival.

South Sudan’s economy has also fallen down the pecking order as a result of the war. The country’s economy relies heavily on oil, one of its most significant resources, but has continued to record stunted growth over the political instability rocking it. This has resulted in widespread poverty among its populace.

Political observers, therefore, noted that the fact that majority of the residents are worn out by the perennial crisis in the country, account for the rising optimism over the recent power-sharing deal.

Thousands of residents in Juba, the capital, have been celebrating the recent power-sharing deal, says an Al-Jazeera report on Wednesday.

Speaking after the signing of the accord in Sudan, Mr. Kiir said the government and rebels should “rededicate ourselves to unite our people and work for a peaceful transfer of power through the ballot boxes rather than through bullets.”

Pundits support the optimism of residents in Juba, and other parts of South Sudan, but contend there is the need for proper representation of all the parties in involved in the power-sharing deal.

“Each one of those ethnic groups is going to want an outstanding share of the cake, and I think if that is not carefully planned and carefully done, it is likely to cause a lot of problems,” Deo Gumba, a researcher at the Institute for Security Studies in Kenya, was quoted as saying by Al Jazeera in a report.

He, however, applauded the recent power-sharing deal, explaining why it may succeed than previous ones. “This agreement was negotiated in almost all the four main cities of this region – that makes it a little bit different from the rest, although it is the same in the letter,” Gumba added in the report.

President Kiir is also optimistic about the recent deal, arguing that previous agreements failed because outsiders imposed them.

South Sudan’s ruling party declared Monday an unofficial holiday to celebrate the signing of the accord, and most businesses in Juba were shut, the BBC’s Nichola Mandil reports from the city.

According to the report, “its members drove around neighborhoods, using loudspeakers to spread the news and with a copy of the agreement in hand, Mr. Kiir addressed at least 10,000 people who had gathered at the airport to welcome him back from Sudan.”