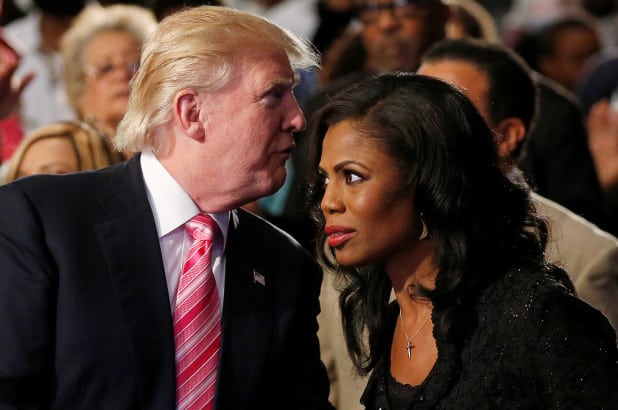 Manigault Newman said she received a call from Trump the day after she was terminated. The recording shows Trump claiming he was unaware of her firing by his Chief of Staff John Kelly.

The audio clip opens with Trump saying, “Omarosa, what’s going on, I just saw on the news that you’re thinking about leaving? What happened?”

Omarosa replied, “General Kelly, General Kelly came to me and said that you guys wanted me to leave.”

Trump said he was unaware of the firing. “No, I, I, nobody even told me about it,” Trump replied.

“You know they run a big operation, but I didn’t know it. I didn’t know that. Godamn it. I don’t love you leaving at all,” Trump continued.

On the NBC Today’s Show, Manigault Newman defended her actions saying she recorded White House officials because they all lie and she had to protect herself.

“This is a White House where everybody lies. The President lies to the American people. Sarah Huckabee stands in front of the country and lies every single day. I had to protect myself, and I have no regret about it,” Manigault Newman said.

She called Trump a con and said he’s declining mentally and has difficulty processing information.

“They continue to deceive this nation by how mentally decline he is; how difficult it is for him to process complex information; how he is not engaged in some of the most important decisions that impact our country,” Manigault Newman said.

Counselor to the President Kellyanne Conway said Manigault Newman is operating as a self-promoter for her new book, Unhinged.

“She’s trying to sell books and settle scores, and you’ve got to be anti-Trump for those to be successful,” Conway said.

Trump fired back at Manigault Newman on Twitter saying she was “not smart.”

.@MarkBurnettTV called to say that there are NO TAPES of the Apprentice where I used such a terrible and disgusting word as attributed by Wacky and Deranged Omarosa. I don’t have that word in my vocabulary, and never have. She made it up. Look at her MANY recent quotes saying….

Trump continued the tweet thread saying that Manigault Newman would “miss meetings and work” and that General Kelly referred to her as a “loser.”

Trump also repeated his contention that Manigault Newman is a “lowlife” and said the media will legitimize her efforts.

“While I know it’s “not presidential” to take on a lowlife like Omarosa, and while I would rather not be doing so, this is a modern day form of communication, and I know the Fake News Media will be working overtime to make even Wacky Omarosa look legitimate as possible. Sorry!” Trump tweeted.