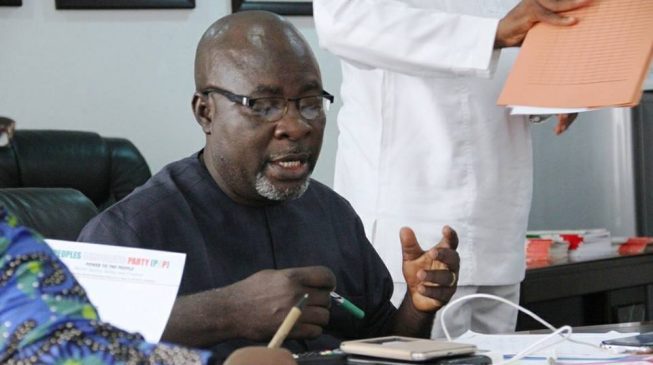 In this interview, the National Publicity Secretary of Peoples Democratic Party, Mr. Kola Ologbodiyan said the APC led government had castrated democracy in Nigeria, especially with recent invasion of National Assembly by the operatives of Department of State Services.

Nigerians with no doubt believed both APC and PDP have failed the country recently. What is your take on this?

PDP may not be a perfect party, but I can tell you that we are better than APC in several ways. Look at what APC has turned this country to in less than four years. Currently, Nigeria is passing through perilous times. Our country is turning into a funeral parlour by the APC. Our people need to know the current state of the country so that they will not make the mistake they made in 2015 by voting for Muhammadu Buhari. We don’t need anybody to tell us that we are suffering.

It is unimaginable that while Nigerians are suffering untold economic hardship, including unpaid salaries, due to the misrule of the APC, governors elected on the platform of the APC diverted N150 million each, amounting to a humongous N3.6 billion to fund their wasteful national convention recently.

Recently, the Brooking Report shows that under President Buhari and APC governors, millions of Nigerians are daily dropping below the poverty line. According to the report, Nigeria under Buhari has become poverty capital of the world. There is hunger and starvation everywhere.

Are you saying APC is a corrupt party?

If we want to be sincere with ourselves, we all know that APC is a party of corruption. Go and check the record of money looted under this government you will realize that the fight against corruption which Buhari is crying about is nothing but fake. Look at the number of people with corruption cases that Buhari has pardoned because they defected to APC. Look at Oshiomhole and others, are they clean of corruption? Yet the so-called EFCC under APC didn’t see him. When you look at them very well, you will realize that Nigeria under them is not safe. And that is why we are telling Nigerians that their second coming will be disastrous for the nation.

On Oshiohmole that you just mentioned, there are reports that your party dreads his chairmanship in APC. How true is this?

That is far from the truth. Oshiomhole is not a chairman in APC; he is just an empty barrel that makes noise. He is not even a mature minded person. What have you seen him achieved since he became the chairman of the party? He lacks every good idea to help them. Governance is not unionism that he was doing. He is not better than a tout when you look at him. He lacks the knowledge of what is called democracy, so, I don’t expect anything spectacular from him, and he has proved to us that he is an empty barrel with some of this comments and attitude.

Moreover, his corruption record in Edo state while he was the governor of the state is another thing you have to investigate. He is nothing but a corrupt personality that supposed to rot in jail. Buhari needs to probe him if he is genuinely fighting corruption.

Are you saying that the corruption fight is not balanced?

Everyone knows that. We all saw that their fight against corruption was launched against the opposition. A good testimony of that is Oshiomhole that is yet to be probed by Buhari. Each time President Buhari poses as a man of integrity, I just smile. If he is a man of integrity, why is he condoning corruption in his presidency and surrounding himself with corrupt people? Why is he blocking the investigation of Oshiomhole over corruption allegations? Why did he allow looted funds to be used for his party’s national convention? Buhari is not a man of integrity to me.

It is observed that both your party and APC have been trading words over the recent invasion of NASS by DSS. What do you have to say on this?

But the Acting President Yemi Oshibajo sacked the DSS boss over the matter in the same day.

The sack of Lawal Daura was a damage-control stunt and a knee-jerk gimmick which came as a response to the national and international outcry against the armed invasion of our legislature by security agents as directed by the Buhari Presidency. The action of security agents that blocked the National Assembly is treasonable and must attract appropriate sanctions under our law. It is not enough to take the populist approach of easing Daura out of office. Our party demands an immediate investigation by an independent panel of inquiry headed by a retired Chief Justice of Nigeria to examine the remote and direct cause of the invasion. Moreover, Section 16 of the Legislative House (Powers and Privileges) Act, 2017, provides that any person, who by any act obstructs members of the National Assembly from performing their legislative duties, is liable and punishable by imprisonment.

It is observed that PDP has been welcoming people en masse into the party for some time now. The first was that of lawmakers. What is the reason for this?

We are delighted with their defection because it signposts the fact that President Muhammadu Buhari’s administration has failed woefully, and Nigerians have become disenchanted with the government. The representatives of Nigerians are demonstrating the anger and the disappointment of Nigerians with their government. That is what led to the defection that we are witnessing. What happened on the floor of the Senate, as well as the floor of the House of Representatives, is a clear indication of the rejection of APC and the President Muhammadu Buhari by Nigerians.

But do you think your party will be able to manage these people that are coming in currently?

There is no question about that. Majority of them left from PDP to APC, so their coming back is not a big deal. They are coming back into their home. They already know the rules in PDP. They are just like travelers that return home after a long time voyage. Moreover, there have been various meetings on how we will tolerate ourselves so as to move the country forward starting from 2019 when we take over from APC.

There are speculations that Saraki has come into the party to dominate the people that were there before. How true is this?

There is nothing like that. The Senate president Bukola Saraki is a very humble person who believes so much in right of the people. He has not come to dominate the party. He has been an added power to unite the party since his arrival.

On the party’s flag bearer for the presidential election. Is there any candidate the party’s leadership is presenting?

You know that that will not happen. There is a level playing ground for every contestant to vie and whoever that emerges will be the party’s flag bearer.

On Saraki’s impeachment at the Senate, don’t you think your party may lose this position to the ruling party any moment from now?

That will not happen except they kill him. Already, Saraki enjoys the support of the majority in the Senate, and he cannot be removed until the two third of the house move against him. Let me tell you; the fact is that even the APC that claimed a majority in the Senate does not have the number to impeach Saraki, so, there is no cause for alarm here.

As PDP is bracing for coming back in 2019 what should Nigerians expect from the party?

On our part, the PDP believes in a united Nigeria and the potentials of Nigerians as a people. That is why the PDP always runs on democratic principles and all-inclusive policies that effectively galvanize the productive energies of our people for national cohesion and economic prosperity, as witnessed in the 16 years of PDP in governance.

As a party committed to the good of all, we have continued to spread out to Nigerians from across all walks of life in developing a recovery blueprint to re-open our national space for peace, reconciliation, cohesion and economic recovery; immediately we are returned into office.

So the solution is for Nigerians to brace up and rally on the platform of the repositioned PDP to rescue and rebuild our nation, come 2019.