Nigeria: How Buhari Is Using The 2023 Presidency To Dupe Ibo’s 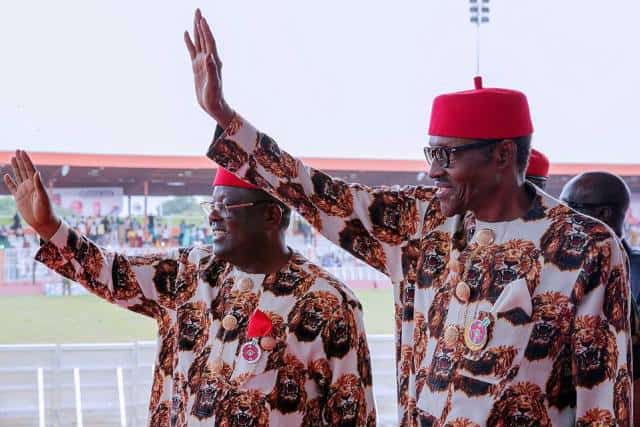 As the 2019 elections close in Nigeria, claims that President Muhammadu’s Second term would hand the Ibo’s an automatic ticket to the nation’s highest seat of power come 2023 are gaining grounds, though with no constitutional backing.

It was 11 am in August at the heart of Enugu State, South Eastern part of Nigeria. The office of state’s chapter of the ruling All Progressives Congress (APC) was filled to capacity for a crucial meeting, attended by major stakeholders of the party. They were there to discuss strategies of clinching the forthcoming gubernatorial elections in the state and the prospects of the party dominating the upcoming elections in the zone.

Mr. Agu Okafor, a member of Enugu State Executive Committee of the party, made his way into a section of the building with our correspondent for a fixed interview. With smiles etched on his face, he spoke reassuringly on his belief that President Buhari’s return in 2019 means an automatic ticket to getting an Igbo Presidency in 2023.

“You see (addressing Caracal Reports correspondent James Ojo), because of the promise of APC and Buhari to hand over power to an Igbo man after 2023, it is incumbent of the Igbo to move massively into APC and support the President so that he will join other region and support Igbo Presidency come 2023 and beyond and if an Igbo man becomes the President of Nigeria, the country will have a lot to benefit.”

“President Muhammadu Buhari’s massive infrastructural development in the south-east in unequaled. No other President of Nigeria has done that in the South East. Look at projects such as Enugu-Port Harcourt road, Enugu-Onitsha, Enugu-9th mile-Markurdi road Enugu International Airport Upgrading, Second Niger Bridge among others…so you can see that not only is President Buhari doing his best to entrench himself in the hearts of Igbo man but also to make it clear that he is Igbo-friendly,” he further told CARACAL REPORTS.

Mr. Okafor is one of the soldiers of President Buhari’s second term bid in the South-East, trying to win over the region for the ruling APC at the country’s forthcoming elections with a belief: The president’s eight years signposts the beginning of an Igbo Presidency.

Why calls for Igbo Presidency?

The quest for Igbo Presidency is rife in the south-eastern part of Nigeria, especially as the country jogs up for crucial elections next year. The region has often threatened to pull out from the entity called Nigeria, over alleged marginalization. In 1967 late Col. Odumegwu Ojukwu, the then military governor of the Eastern Region declared independence of a new nation of Igbo extraction christened called the Republic of Biafra.

However, the government’s continued confrontation with the group and the disappearance of its leader, Kanu, has waned activities of the group. Commentators argued that the Nigerian government must seek proper inclusion of the region in governance, especially by ensuring a president of an Igbo extraction emerges to give the region a sense of belonging.

The Igbo 2023 Presidency Debate: A reality or ruse to win south-east for Buhari?

The Igbo 2023 Presidency debate has become a very salient issue dominating political discussions in the country ahead of next year’s general elections. There are two schools of thought on the matter.

The first school of thought contends that based on equity, it behooves on the President Buhari-led administration to relinquish power to the region, should he emerge the winner at next year’s presidential elections. Proponents of this school of thought cited the president’s personalities, claiming he remained the best shot through which the South-East region can actualize its quest to produce a President. They further argued that producing a president other than Buhari from the North at next year’s election would mean elongation of the region’s quest for the presidency, hence the need for it to support Buhari.

Commenting on this, erstwhile governor of Abia State, Orji Kalu had while speaking during an interview session on Arise Television, a local media in the country said: “After Buhari’s eight years, nobody in Nigeria can tell us that our region cannot produce the president. Majority of the Igbo will massively support Buhari in 2019. They did not support him in 2015. But in 2019, they will massively vote for him. APC has come to stay in the South-East. Buhari contesting in 2019 is not only for himself but also for the south-east.”

Minister of Labor and Employment, Chris Ngige also had in a recent statement urged the Igbo nation to vote for Buhari, saying only Buhari’s presidency in 2019 could guarantee Igbo presidency in 2023.

“If you remember in 2015 election, Kano alone gave two million votes to Buhari and Katsina gave nearly one million. So, all I’m trying to say is that the configuration of the election patterns in 2015 has not changed in terms of strength.

“In the South-East, we are in the neighborhood of about eight to nine million voters. The South West has about 12 to 13 million, and the last time, they delivered 55 percent of their votes to Buhari while Jonathan got about 50 percent or thereabouts.

“So, I am saying in effect that you must do political engineering, in the South East and step up to support a Buhari Presidency for 2019/2023 and vote for it all their strengths. By so doing, Igbo will get strategic positions in government. They will also even get into the kitchen cabinet of the presidency. There is no government that doesn’t have a kitchen cabinet.

“Number two, it will be easy for an outgoing president to find joy in doing an equitable nomination of somebody from the South East to say, this person or these persons are fit and proper to succeed me and he can even canvass, based on equity to say that the South East is the only zone in Nigeria that has not tasted this presidency and people will listen, both on moral grounds and on the basis of equity.

“It is obvious that any other northerner elected in 2019 will go for eight years of the presidency and so, 2023 will not be feasible for any other zone. So, on moral grounds, on the basis of equity, it will be the turn of the South-East. South-East must step up out to say it is our turn with enough punch and convincing reasons.”

Critics, however, faulted this claim, describing the idea as a ruse to garner votes for Buhari at next year’s elections in the region. This school of thought hinged its premise on the non-constitutional nature of the arrangement, noting that such could be altered if the need arises.

The much-vaunted Igbo 2023 Presidency is rooted in an unwritten power-sharing agreement known as zoning. This arrangement, which gained popularity during 1999 and 2007 elections, demands that the country’s major parties alternate the presidency between northern and southern officeholders every eight years.

As it stands, winning over the region would be a herculean task for the President Buhari-led administration, who has no huge fan base in the region like he did in the north and this is another factor quashing the Igbo Presidency claim, critics said.

Although the President announced that he “belongs to everybody and belongs to nobody,” critics believed that so far, he has not walked the tall of the saying.

In a video speech credited to the Buhari while speaking at the US Institute of Peace in mid-2015, the President shocked the world when he said “(Going by election results) constituencies that gave me 97% can not, in all honesty, be treated on some issues, with constituencies that gave me 5%. I think these are political realities. While certainly, there will be justice for everybody but the people who voted and made their votes count, they must feel the government has appreciated the effort they put in putting the government in place. I think this is really fair…”

In 2015, the region voted largely for Goodluck Jonathan, who eventually lost to Buhari at the polls. Presently, an all-Buhari vote in the south-east looks much impossible in the area at the 2019 elections again, and there is therefore little optimism that the President would hand over power to an area which is unlikely to support him.

“I Know it (referring to Igbo 2023 presidency claim) is a hoax. Anyone believing it is not wise. It is just a political statement to hold the Igbo nation down politically,” says Mr. Okeke Chibueze, a public affairs analyst, based in the south-east in a chat with CARACAL REPORTS.

He added: “For instance, PDP touted if for 16 years and at the end of the day, APC picked up the baton which they will still use for the next 16 years if the party continues in power. Secondly, these things are in the Nigerian constitution; they are just party arrangements which do not stand if the party is no longer in control.

“So, it is a political gimmick to get power not only for Buhari but also for the North. That is why every Northerner who wants to clinch on the presidency comes promising the South East Presidency after his tenure, but we all know them for who they are, politicians without honor and integrity.

“There is a part of this that also calls for concern, the part of our politicians from the south-east pretending they do not know the truth about these things. They are only concerned about remaining perpetually in power to the detriment of the good of their own people. For instance, if Nnamdi Kanu had not given a voice to restructuring and the interest of the Igbo nation, we would not be having it in our debates today. Also, you may have noticed that since the disappearance of Nnamdi Kanu, the various voices for restructuring died off.

“Even the South-East Economic Summit Nnia Nwodo organized did not see the light of the day. All have been swept under the carpet and tomorrow we start crying woes claiming we are being marginalized. I tell people if that if Ndigbo can be sincere with ourselves, from the elites to the common man, we will soon become the envy of Africa and still as part of the geographical entity called Nigeria.

“Finally, I am more interested in a Nigeria where the Igbo man is given equal rights, opportunities and privileges to survive like his Hausa and Yoruba counterparts than I am in a Nigeria ruled by an Igbo man. We have frustrated many industries of Igbo origin; this has remained a major reason why Nigeria is not progressing in any way. There is an Igbo saying that “He who holds a man down is holding himself” This is the case in Nigeria. In trying to frustrate the Igbo nation, we have continued to frustrate our progress as a nation.”