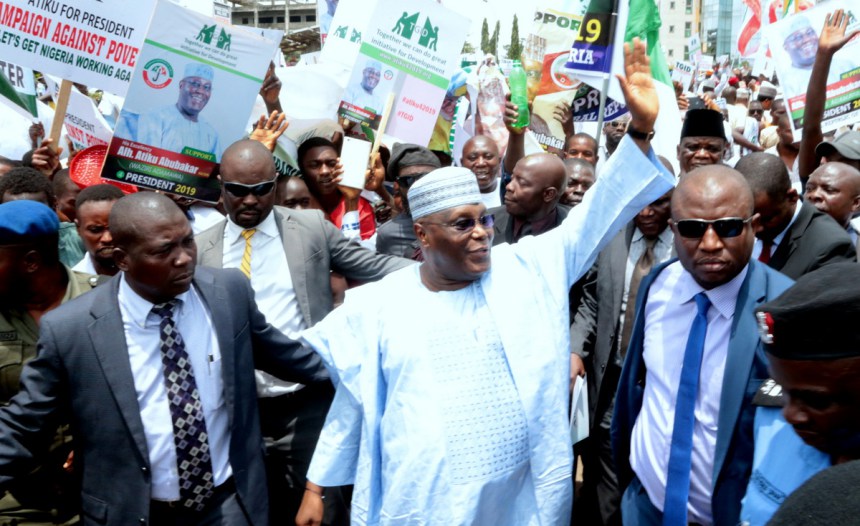 For the thirteen presidential aspirants under the platform of the Peoples Democratic Party (PDP), clinching the party’s ticket at the forthcoming presidential primary election is a fight to finish.

The much-anticipated presidential primary election in the major opposition party is already heating up the country’s political space, and observers say the outcome of the exercise would determine its success at the coming polls.

Already, no fewer than 13 aspirants have indicated their interest to contest for the ticket. The latest among them was a former Senate President, Senator David Mark. The winner of the primary election will challenge incumbent President Muhammadu Buhari of the ruling All Progressives Party (APC) at next year’s elections.

Findings by our correspondent showed that the leadership of the main opposition party has been talking up the possibility of fielding a consensus candidate at next year’s elections with the aspirants, but many of the contenders were seemingly unhappy with the arrangement, insisting the primary election should determine who flies the party’s flag in 2019.

Meanwhile, political pundits have begun to ponder on the chances of the aspirants that have indicated interest to contest the race so far.

In this report, CARACAL REPORTS ADEBAYO ADESANYA takes a look at the strengths and weaknesses of the major candidates jostling for the  Presidential ticket at next year’s crucial elections.

Atiku Abubakar is one of the strong contenders to snatch PDP’s presidential primary ticket. Findings by our correspondent revealed that the odds may favor the former Vice-President than other contestants in the main opposition party.

Observers contend that his popularity within the six geopolitical zones in the country will hardly be matched by any aspirants in the race for the party’s ticket. Atiku, it was gathered, will enjoy good patronage from South West, considering the fact that his wife is from the region.

According to Boladale Adekoya, A public analyst in the country, the only aspirant that stands the chance to oust President Buhari in 2019 is Atiku Abubakar. According to him, Atiku will be the best match up against Buhari.

Defending his claim, Adekoya stated that the PDP stands a better chance of winning 2019 Presidential elections with Atiku “due to his ability to speak to the conscience of all Nigerians and pose a receptive mind that the younger generation can relate to.”

“I understand that lots of horse-trading are expected to take place before the primaries but if the Peoples Democratic Party were to be strategic, they would use their best candidate. “Atiku has an established nationwide political structure that if fused with the support of the opposition Governors and leaders, the possibility of having victory is much higher than any of the other aspirants,” Adekoya told CARACAL REPORTS.

Also speaking, a stalwart of the party from Lagos state, Mr. Dipo Olorunrinu advised the party’s leadership to consider Atiku as the sole candidate of the party in the coming presidential election.

“Atiku is someone that has people around him. We should give him very big applauds for coming out. Let’s see what he has on the table. Personally, I want to appreciate his decision to rule. The truth is that his declaration will actually give the ruling party a run not just for their money, but also their interest in governing in 2019. Atiku is somebody that cuts across geopolitical and ethnic zones and he should be given a chance,” he said in a chat with CARACAL REPORTS.

The lawmaker added that the former vice president has enough experience needed to pilot the affairs of the nation. On the rising number of PDP aspirants for the seat of the President, Olorunrinu urged them to support the best aspirant that could guarantee victory for the party in 2019.

Similarly, a chieftain of the party, Hon. Oladimeji Fabiyi said Atiku remains the best choice as presidential candidate for the Peoples’ Democratic Party.

“I have no doubt in my mind that with Atiku Nigerians and the PDP will be making the best choice and decision if we as a people truly wish to make abundant progress and return PDP to power come 2019 the evidence is clear but the choice is ours to make. The messages are also unambiguous but the decision remains solely ours”

“Our party PDP must remember that Nigerians hope on them, the recent coalition is quite commendable and Nigerians should support the alliance initiative led by the PDP leadership under Prince Uche Secondus.”

Some pundits, however, noted that certain factors may stifle PDP’s chances at the polls, should Atiku wins the Presidential primary ticket of the party. According to them, his feud with his former boss, former president Olusegun Obasanjo, with no doubt has a way to determine his fate in respect of his ambition.

Obasanjo appeared to be a die-hard enemy of the former vice president who is hell-bent to hinder his longtime dream. Pundits believed that Atiku should not undermine the influence of Obasanjo if he cares to take over the presidential seat in 2019, therefore find a way to settle the matter with him.

Earlier in August, Obasanjo, who had consistently voiced his disaffection for Atiku, quashed claims he was supporting his former deputy’s presidential ambition.

“How can I be on the same side with Atiku? To do what? If I support Atiku for anything, God will not forgive me. If I do not know, yes. But once I know, Atiku can never enjoy my support,” he had been quoted as saying by local media sources.

If loyalty to a party is to be a factor in picking the party ticket for the general elections, then look no further than the Godfather of Jigawa politics. He is among the G34 founding member of PDP in 1998. He is a protege of Aminu Kano. He does not believe in Ahmadu Bello kind of politics that we see in the north now. He is the first candidate to declare his intention to run for PDP ticket far back in 2016 during his EFCC court trials. He is popular in some states in the North such as Jigawa, Kano, Gombe, Bauchi, Sokoto. He is relatively unknown in north-central and southern party t of the country.

He is a professional accountant and the youngest presidential candidate running for PDP. If youth was to be a factor in getting the ticket, then look no further than Dakwambo. He has the backing of a few PDP governors such as Okowa of Delta, Seriake Dickson of Bayelsa and Ayo Fayose of Ekiti state. But he is not a popular politician in the North, in fact apart from his home state Gombe, It will be a herculean task getting votes in the middle belt and other core northern states. His governor friends and youths in the country can garner him necessary votes in the southern part. He is the only aspirant that doesn’t have a corruption case on his neck. This can be a factor during campaigns for election.

The current senator and former Governor of Kano state is arguably the second strongest man in Northern politics just behind President Buhari. His political clout and movement kwankwansiyya is a force in almost all the Northern states in Nigeria, he surprisingly came second during the APC presidential primary only behind the winner, President Buhari. He is also a popular figure among the masses. But this large followership in the north does not transcend to the southern part. As many southerners see him as an ethnic bigot and religious fanatic like the president.

Despite his adversary with his former political party, APC, the Senate president believes he has all he takes to occupy the number citizen seat in 2019 hence he declared his interest to contest in the race.

According to sources, who chose to be anonymous, Saraki who is now the PDP national leader is expected to bank on his political sagacity which made him successfully have his ways with his former political party, APC. He is also believed to be one of the few Nigerian politicians that are currently pulling crowd across the country. Saraki had already started consulting wide on his ambition. Among his recent moves were a homage paid to the former head of state, Gen Ibrahim Babangida, former President Olusegun Obasanjo, and others.

He is a former commissioner, senator, and Governor of Kaduna state. He is also the founder of a popular political and civil group: The center for peace, and conflict resolution. He is the former chairman of PDP caretaker committee during the crisis regarding the sheriff faction, and he brought peace and tranquillity to the opposition party. The question is; does he have the delegates to win the primaries? Apart from states such as Kaduna, Kogi, plateau, and Niger. He might find it hard to garner votes from the remaining northern states, plus he has little or no followership in the southern part of the country to help his presidential ambition.

He is a Kebbi born politician. He is famously known as the former minister of special duties during GEJ regime. He is believed to be the candidate of Goodluck Jonathan.

The former speaker of the house of representatives and current Governor of Sokoto state is a political colossus in his own right. It is known that the Sultan of Sokoto, Emir of Kano and the governor of Rivers state is tacitly supporting his ambition. He is the second youngest aspirant and is relatively popular in the northern region. He was famously touted as the presidential candidates of the APC before the emergence of Buhari at the last minute. He is loved by the southern region as they do not regard him as an ethnic bigot.

Nigerians are keenly anticipating where the pendulum will swing in the party as its presidential primary election draws nearer.