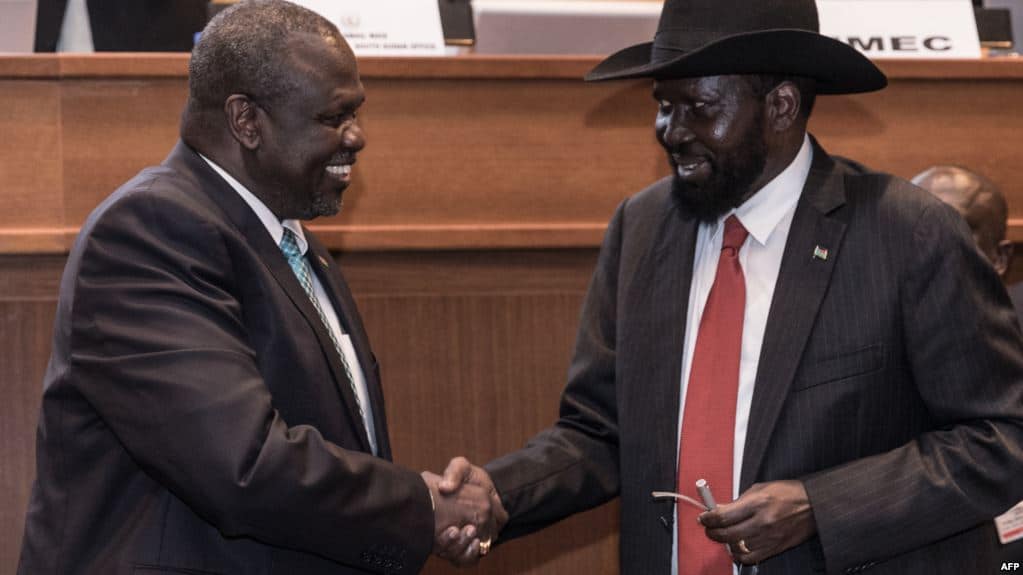 The peace deal is coming after several of such ceasefires hit the rock in the past. It is therefore seen as a further consolidation of ongoing efforts to permanently end five years of bloody civil war that had brought the country’s economy to its knees and created widespread political instability.

The two rival leaders had agreed a peace deal a few weeks ago, both pledging their commitment towards a peaceful South Sudan. The agreement reported by CARACAL REPORTS, stipulated that Machar would return to a unity government as the first of five vice presidents.

Wednesday’s deal, brokered by Sudan and signed in Addis Ababa, Ethiopia’s capital, formally reinstated Marchar as vice-President, a position he quitted earlier when things went sour between him and Kiir.

Confirming the peace deal in a chat with The Associated Press, South Sudan government’s spokesperson Ateny Wek Ateny, announced that Kiir, Machar, as well as other opposition parties, had signed the “final final” deal, adding that the warring parties were satisfied with terms of the deal.

He further stated that both Kiir and Machar engaged in a friendly and successful chat.

The recent agreement has raised greater hopes that the peace could finally return to the streets of the country after strings of clashes between government and rebel groups have left many dead while also displacing families.

“With the signing of this revitalized agreement, we should publicly acknowledge it is but one step on the road to peace, but one which lays the foundation for all that follows,” David Shearer, head of the United Nations Mission in South Sudan was quoted as saying by Aljazeera.

The US, Britain, and Norway which supervised the peace deals in the country also revealed their optimism about the deal in a joint statement.

“We hope discussions will remain open to those who are not yet convinced of the sustainability of this agreement. We must seize this broader regional momentum to secure peace for the people of South Sudan,” the three countries said in a statement.

South Sudan’s crisis started in 2013, two years after it gained independence from Sudan, following an allegation by President Salva Kiir that his former and now rebel leader Riek Machar was plotting to oust him from power. This degenerated to a massive political war that has nearly reduced the East African nation to rubbles.

The crisis has taken a huge toll on the country since it began in 2013. Tens of thousands of people have reportedly died while millions of people have been displaced, with no hope of survival.

Its economy has also fallen down the pecking order as a result of the war. The country’s economy relies heavily on oil, one of its most significant resources, but has continued to record stunted growth over the political instability rocking it. This has resulted in widespread poverty among its populace.