Russia China Alliance Waxing Stronger In Response To US Pressure 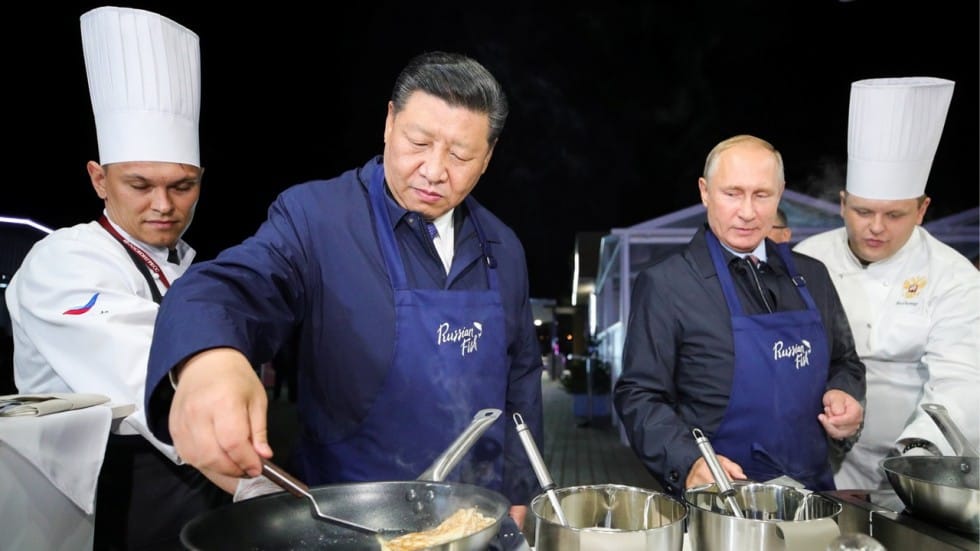 The public relations event in Vladivostok, Russia was part of broader Sino-Chinese efforts to increase economic and military cooperation between the two nations.

Prior to the light-hearted blini summit, the two leaders met for formal talks at the Eastern Economic forum.

After the meeting, the third between the two leaders in less then a year, Xi called Putin a “close friend” and said that they had “entered a new era of rapid development and are reaching a higher level.”

Xi said, “The president (Putin) and I agree that since the beginning of this year, Russian-Chinese relations have been showing dynamic growth.”

Chinese and Russian relations have been improving steadily since US President Donald Trump assumed office.

Alexander Gabuev, a senior fellow at the Carnegie Moscow Center, told NBC News that the “Trump administration and domestic political fight in the U.S. just bring the confrontation to a new level, and increased Sino-Russian cooperation is (the) result.”

Gabuev said China and Russia’s efforts to work together have been “driven by U.S. pressure against both of them at the same time.”

Months ago, the Trump administration intentionally exacerbated trade pressure on China by imposing a 25 percent tariff on steel and aluminum. The Chinese retailed, and an ongoing, tit-for-tat, trade war is now in effect.

Just a few days ago the Trump administration imposed an additional $200 billion in tariffs on consumer goods and manufactured materials.

The US also has continued to sanction Russian individuals and companies alleged to have interfered in the 2016 Presidential election. Trump’s predecessor, President Barak Obama also imposed sanctions on Russia for a 2014 invasion of Ukraine.

Meanwhile, Russia and China’s partnership inspired $87 billion in trade between the two countries in 2017. Putin said he expects bilateral trade to increase to $100 billion in 2018.

Coinciding with the Eastern Economic forum, NBC News reported that thousands of Chinese troops joined Russia’s Vostok military games. The exercise was billed as the largest since the Regan era.

Nonetheless, the two nations are not negotiating on an equal playing field.

Zach Witlin, an analyst at Eurasia Group, told NBC news that China is not going to compensate for economic losses sustained by Russia. The Chinese believe that US sanctions imposed on Russia are Russia’s to deal with.

“All of this is balanced against the fact that Russia and China have limits to what they are willing to cooperate on and how deeply that cooperation is likely to develop,” Witlin said