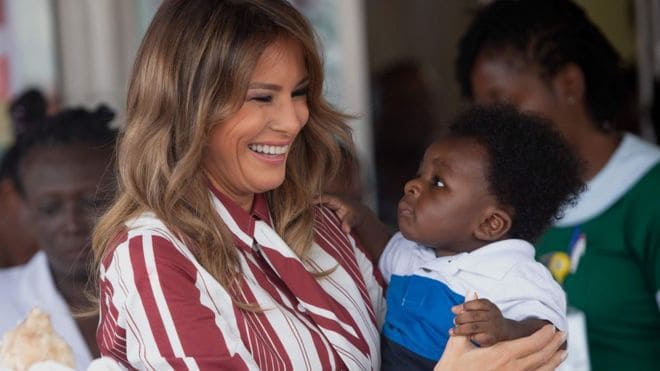 Melania Trump began her five-day visit to Africa in Accra, Ghana on Tuesday and many believe the move would help improve President Donald Trump’s seemingly unfavorable image in Africa.

On Tuesday, US First Lady, Melania Trump arrived Accra, Ghana to commence her much-vaunted five-day tour to Africa. Mrs. Trump is expected to visit four countries in the continent during her epoch-visit. The countries include Ghana, Kenya, Malawi, and Egypt.

The US First Lady had in August revealed plans to visit the African countries by October to explore the continent’s ‘rich culture and history.’

She had said: “This will be my first time traveling to Africa and I am excited to educate myself on the issues facing children throughout the continent, while also learning about its rich culture and history.

“We are a global society, and I believe it is through open dialogue and the exchanging of ideas that we have a real opportunity to learn from one another.”

Mrs. Trump arrived the continent on Tuesday after an overnight flight from Washington. Earlier at the airport, she was welcomed by dancers and drummers, but the public reaction has been low key, reports the BBC’s Thomas Naadi from the Capital.

On arrival, she kickstarted her five-day tour with a visit to the Greater Accra Regional Hospital alongside Ghana’s First Lady Rebecca Akufo-Addo where she watched babies being weighed as part of a project aimed at promoting nutrition in children, which is supported by funding from the US government’s foreign aid organization, USAID.

The First Lady is expected to promote her ‘Be Best’ initiative which is geared towards addressing issues such as cyberbullying and boost healthy living during her visit. She tweeted that the campaign was going “international.”

On a redemption mission?

Many believe Mrs. Trump’s visit to Africa is to heal the ongoing divisions between President Donald Trump and African Countries. The Trump administration has consistently come under fire over its disposition to the continent.

President had in February raised eyebrows, sparking widespread criticisms, when he allegedly used “shithole” to refer to African countries, claiming immigrants from Africa and elsewhere were flooding the U.S.

“Why are we having all these people from shithole countries come here?” the Washington Post quoted him as saying.

African Union, (AU) among others then slammed Trump’s administration for the comment, demanding an apology from the President for allegedly bringing the continent’s image into disrepute.

The AU had in a statement released shortly after Trump’s controversial comments said: ”The African Union Mission condemns the comments in the strongest terms and demands a retraction of the comment as well as an apology to not only the Africans but to all people of African descent around the globe.”

According to the statement, ‘the African Union strongly believes there is a huge misunderstanding of the African continent and its people by the current administration’ and that ‘there is a serious need for dialogue between the US administration and African countries.’

The US President had however quashed various criticisms that trailed his comments. Shortly after the speech, the President had told journalists: “I am not a racist. I’m the least racist person you have ever interviewed.”

Observers have argued that Trump administration’s disposition to Africa could smear the continent’s image before the international community, but the President, so far, appears unapologetic, going by subsequent events that happened after his ‘shithole’ comment.

In August, Financial Times reported that Trump described Nigeria’s President Muhammadu Buhari as ‘lifeless’ during his visit to the White House. The clouds of dust generated by the development had barely died down when the President clashed with the South African government over proposed land reforms allegedly seeking to strip white farmers of land ownership.

Pundits, therefore, observe Mrs. Trump’s visit to the continent could be an attempt to smoothen what has looked like a fractured relationship between President Trump and Africa.

Few days before Melania flew into Africa on Tuesday, the US President took many aback when he spoke positively of the continent saying, “We both love Africa. Africa is so beautiful. The most beautiful part of the world, in many ways.”