Nigeria: How Atiku, Saraki’s Ambitions Could Cost PDP In 2019 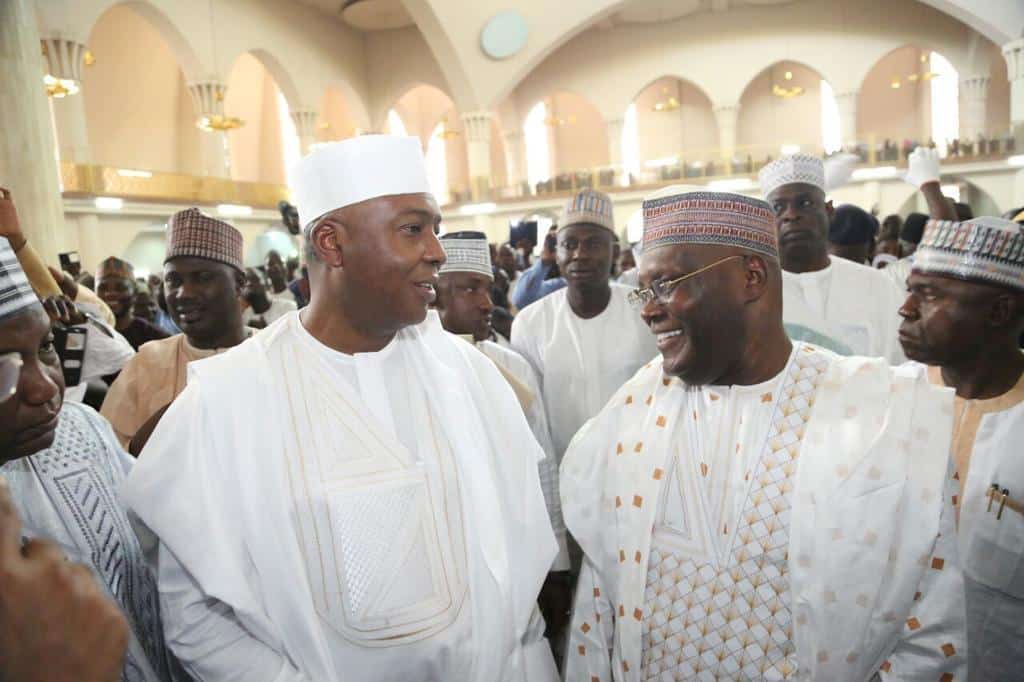 Fourteen candidates, one presidential ticket; it’s never going to be easy for the People’s Democratic Party (PDP) to produce a consensus candidate against incumbent President Muhammadu Buhari of the ruling All Progressives Congress (APC) at forthcoming 2019 general elections.

Analysts have argued that the main opposition party’s chances of ousting President Buhari in the next year’s elections will be determined by its ability to successfully produce a consensus candidate in 2019 presidential primary slated for October 6, without acrimony.

But this, so far, looks unlikely given the determination of each of the party’s aspirants gunning on for the nation’s highest seat of power to win the presidential ticket at all cost.

The ongoing supremacy battle for the party’s presidential ticket between two of its heavyweight aspirants– former vice president Atiku Abubakar and the current Senate President, Bukola Saraki- clearly demonstrates this.

PDP being the major opposition party in Nigeria is tipped to present a candidate that can challenge President Muhammadu Buhari in 2019. But recent political activities in the party have posed a significant challenge to the party about its mission to oust Buhari.

CARACAL REPORTS gathered from a reliable member of the PDP that the party is already divided between Atiku and Saraki. According to our source, whoever loses might not support the winner. The fight is getting personal especially as it is perceived that some governors have intervened to adopt their interested candidate.

“As it is, things are falling apart in our party once again, and it is generating concerns for our leaders. The struggle for the ticket may lead to something else. As it is, most of the PDP governors have adopted Saraki, with others that went for Atiku. The major issue is that none of them and their supporters is ready to support the winner at the end of the coming primary election”, the source from the party’s national office, who preferred anonymity told our correspondent.

One of the media aides to the forum’s chairman said eight out of the 14 PDP governors are rooting for Saraki, while the remaining governors are divided between Atiku and Tambuwal.

“The governors are divided on the best choice out of the 13 aspirants. While eight backed the choice of Saraki, two are supporting Atiku, while the other two support Tambuwal. Dankwambo and Tambuwal are also in the race”, the aide said.

Recall that the governors, while meeting with the aspirants and members of PDP National Working Committee (NWC) had disagreed with the idea of consensus candidate and had resolved that all the aspirants should go for the primaries.

Bukola Saraki’s ambition appears to be garnering power after more governors of the opposition party are throwing weight behind him. This indication emerged as Abubakar Bukola Saraki Campaign Organisation (ABSCO) announced the appointment of Mr. Ilemona Onoja as its spokesman.

Canvassing for Saraki, the spokesperson for the group said “Apart from governors elected on the platform of the PDP who have declared their support for Saraki and are earnestly rooting for him to clinch the party’s ticket at the convention, more governors have joined the train. “If you take away the Middle Belt, which is already in his pocket as his home base, all things being equal, Saraki stands a good chance as the favorite to clinch the party’s ticket. He currently enjoys massive support from the majority of governors in the South-East and South-South geo-political zones”.

He added that “Aside from the many PDP youth volunteer groups that have enlisted in the Campaign Organization, several notable PDP stalwarts across the country who have resigned from the party are now coming out and rallying round Saraki’s candidacy.”

Citing a meeting of PDP North-Central stakeholders and leadership group held recently, the group’s spokesperson said  the consensus at the meeting was that personalities who had indicated interest in the party’s presidential ticket were worthy and eminently qualified individuals, but the body language at the meeting seemed to be pointing to a support for Saraki’s candidacy. He said, “The feeling is that the North Central deserves the presidency of Nigeria and they are more inclined to use Saraki as their battler.”

Meanwhile, political observers have expressed concern on Saraki’s political antecedent and his chance of beating Buhari if he eventually emerged PDP presidential candidate.

Chief Wole Abraham, while speaking on the development said the Senate president is yet to be ripped for a contest against President Muhammadu Buhari.

“Saraki in his capacity has its weight, but not to contest against the president now. Various factors will checkmate him if he comes out, because, he does not have such strong political structure across the country. Moreover, has he forgotten he is vying against the incumbent president alongside Bola Tinubu, Orji Kalu and others? I think the party leadership should think very well if they want to have a serious outing in the presidential contest in 2019”, Chief Wole, a political analyst, said.

The PDP national spokesperson, Mr. Kola Ologbondiyan when contacted over the development said “I can’t confirm to you about any rift in the party. All I know is that the party is fine with everyone ready to work together to chase out Buhari and APC in 2019. The aspirants will contest the primary election, and it will be without favor to anyone, and whoever that wins will be given full backing by others”.