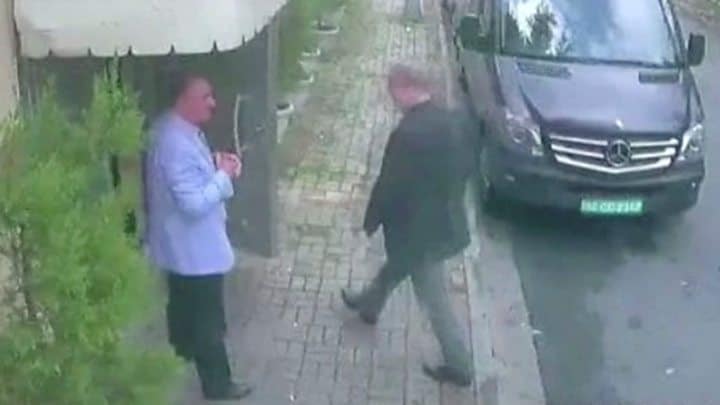 On October 2, U.S resident and journalist Jamal Ahmad Khashoggi entered the Saudi Arabian consulate in Turkey to obtain paperwork for his upcoming nuptials — he never exited.

For 12 days, the endless broadcast video shows the Washington Post contributor and former general manager of the Al Arab news channel entering the consulate. But no video evidence shows him leaving.

Khashoggi, a widely known critic of the Saudi government, had been residing in the U.S. under self-imposed exile from Saudi Arabia since 2017 for fear of his life.

Turkish officials claim Khashoggi was detained and dismembered, but the Saudi officials call the allegations “baseless.”

Khashoggi wrote extensively about Saudi Arabia and was critical of its war with Yemen, the diplomatic chaos with Canada and its arrest of women’s rights activist after the ban on women driving was lifted.

All of those policies were viewed as initiatives of the Saudi Crown Prince Mohammad bin Salam.

During a “60 Minutes” interview scheduled to air in full on Sunday, President Trump was asked if the Crown Prince Mohammad gave the order to kill Mr. Khashoggi. “Nobody knows yet, but we’ll probably be able to find out,” he said.

President Trump who secured a multi-billion arms deal with Saudi Arabia and chose Riyadh for his first foreign destination as president has given the Crown Prince glowing praise as a positive investment.

The Saudi Crown Prince Mohammad bin Salman was a guest of the President at the White House and in April took a three-week tour of the United States. He met with Bill Gates, Jeff Bezos, Morgan Freeman, Dwayne Johnson, and Richard Branson.

The glittering view of the Crown Prince Mohammed has since dimmed under the swirl of the allegation that his family ordered the gruesome murder of Khashoggi and has left his upcoming Future Investment Initiative conference dubbed “Davos of the Desert” in shambles as foreign investors cancel their attendance.

By week’s end, The New York Times and every other major Western news media organization, except Fox Business Network, had canceled its participation.

Treasury Secretary Steven Mnuchin is also still scheduled to represent the Trump administration, though, on Friday, Mr. Trump told reporters that he might reconsider that decision.

Details of the Disappearance

Sabah, the Turkish news outlet along with government officials, detail the arrival of nine Saudi officials and intelligence officers, some with diplomatic passports touched down at Ataturk Airport in Istanbul via a private charter plane from Riyadh, Saudi Arabia at 3:13 a.m., October 2.

Saudi officials checked into two hotels in the financial district near the Saudi consulate where they booked two rooms for three nights. The group of nine were said to have later retrieved their belongings the same day.

After handing over his two cell phones to Hatice Cengiz, his fiancé, he told her to get help if he did not reappear. A video shows Khashoggi entering the consulate at 1:14 p.m.

Turkish officials said Khashoggi was tortured and murdered within two hours of his arrival at the Saudi Consulate by a team of agents and was dismembered by a bone saw.

Saudi Crown Prince Mohammad bin Salman along what Saudi officials insist Khashoggi left the consulate shortly after he arrived, but no evidence has revealed those claims.

Investigators suspect Khashoggi to be in one of the other two vehicles who drove to the Saudi consul’s residence on Medellin Street, 200 yards from the consulate and remained there for four hours.

Reportedly, Turkish staff members of the residence were unexpectedly told not to report for work that day.

A second private jet arrived at Ataturk airport in Istanbul around 5:15 p.m., carrying six Saudi officials and departed under an hour later at 6:20 stopping in Cairo before returning to Riyadh.

The jet that arrived earlier in the day departed at 10:46 p.m. leaving Istanbul for Dubai.

Both planes were under the operation of Sky Prime Aviation Services, a Riyadh based charter company known to have a long relationship with the Saudi government.

Ms. Cengiz waited for her fiancé for 12 hours, he never emerged.

Since the incident, Turkish officials reportedly obtained an audio recording file said to have been transmitted from the Apple Watch Khashoggi was wearing when he entered the Saudi embassy.

An outcry from human rights and free-press advocates, as well as critics of Saudi Arabia, have voiced grave concern in the Khashoggi incident — placing the strong U.S. – Saudi relationship under mounting scrutiny.

The U.S. has been reluctant to accept the Turkish government’s assessments of the Khashoggi incident as President Trump stated U.S. relations with Saudi Arabia were “excellent,” and he was reluctant to upend a $110B U.S. weapons deal with Riyadh.

On Friday, U.S. President Donald Trump finally vowed “severe punishment” if the Saudi government were found to be responsible.

Then on Saturday, U.S. President Donald Trump said the United States would be “punishing” itself by halting military sales to Saudi Arabia even if it is proven that Saudi journalist Jamal Khashoggi was killed inside the country’s consulate in Istanbul.

French President Emmanuel Macron said his country wanted to know “the whole truth” about the writer’s disappearance, calling the early details about the case “very worrying.”

Macron said “I’m waiting for the truth and complete clarity to be made” since the matter is “very serious.” He spoke Friday in Yerevan, Armenia, to French broadcasters RFI and France 24.

In Germany, Chancellor Angela Merkel’s spokesman, Steffen Seibert, said Berlin was also “very concerned” about the writer’s disappearance and called on Saudi Arabia to “participate fully” in clearing up reports that he had been killed.

On Friday, Saudi Arabia welcomed Turkey’s positive response to a request to create a joint investigative committee to probe the disappearance of the Saudi journalist.

“Saudi Arabia commends the positive response from our brother country Turkey to its request to form a joint expert team to bring the Jamal Khashoggi case to light,” the Saudi Foreign Ministry announced from its official Twitter account.

It is possible Saudi Arabia’s response to the incident could provide clues to how the issue may ultimately be resolved – or not at all as Turkish officials have yet to gain access to the consulate.

English language Arab News reported that the Saudi Ambassador to the U.S. Prince Khalid bin Salman condemned the malicious leaks and “grim rumors” surrounding the disappearance of Khashoggi and that claims he was abducted and killed absolutely false.

Claims of Khashoggi’s disappearance inside the Saudi consulate have been pushed to Qatar by Al Arabiya; the Saudi owned pan-Arab television station based in Dubai.

U.S Secretary of State Mike Pompeo called on Saudi Arabia to support a thorough investigation into Khashoggi’s disappearance to be transparent about the results of the investigation.

A bi-partisan response from U.S. leaders in the wake of the Khashoggi incident has led several U.S. Senators to speak out.

Senator Chris Murphy (D-Connecticut) wrote that if the reports were true, “it should represent a fundamental break” in Saudi Arabia-United States relations and called for a temporary halt in U.S. military support for the Saudi led intervention in Yemen.

Senator Rand Paul (R-Kentucky) said he would attempt to force a vote blocking the future arms sales to Saudi Arabia.

Chair of the Senate Foreign Relations Committee, Senator Bob Corker (R-Tennessee), sent a letter to President Trump signed by committee members instructing the administration to determine whether Khashoggi was indeed kidnapped, tortured, or murdered by the Saudi government.

On October 9, the Washington Post reported U.S. intelligence intercepted the communication of Saudi officials discussing a plan to capture Khashoggi, although it was not clear whether the Saudi’s intended to arrest and interrogate him or kill him or if the U.S. warned Khashoggi that he was a target.

Khashoggi was a legal resident of the United States and entitled to protection; the intercepted communication was deemed essential.

“The Arab wold stays silent…there’s been no official reaction from any Arab government, and hardly any condemnation from Arab media,” reported Al Jazeera.