Nigeria: Why Trump’s Unguided ‘Words’ Is A Danger To The Free World 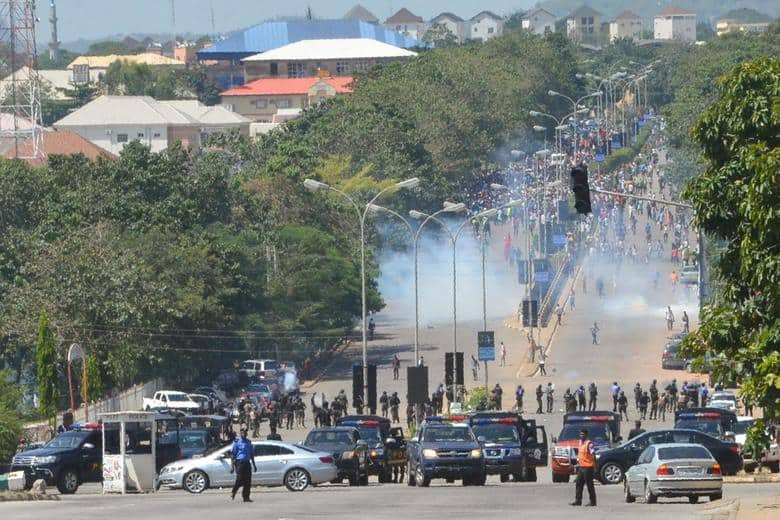 By failing to learn from history, Nigeria risks repeating the same mistake that produced today’s deadly Boko Haram with a continuous clampdown on members of the Islamic Movement of Nigeria (IMN).

Last week, the Nigerian army tweeted a video of President Donald Trump’s anti-migrant speech in which he said rocks should be considered firearms if thrown toward soldiers at the US border to defend its recent decision to open fire on protesting members of the Islamic Movement of Nigeria (IMN).

In the video on Thursday, Trump spoke further on his controversial immigration policy. Asked by a journalist if active-duty soldiers being sent to the US border with Mexico would fire on migrants seeking asylum, Trump, who appeared economical with his words gave a bombshell-like response.

“We’re not going to put up with that. They want to throw rocks at our military, our military fights back,” the US President told a news conference.

“I told them (troops) consider it (a rock) a rifle. When they throw rocks as they did at the Mexican military and police, I say consider it a rifle,” he added.

The army had cited Trump’s comments in the video via its verified Twitter account @HQNigerianArmy with a note reading: “Please Watch and Make Your Deductions.”

The Army’s response was ostensibly seen as a justification of its action following a series of attacks against it for reportedly shooting IMN members during a demonstration in Abuja, the nation’s capital, on Monday.

The Islamic Movement Nigeria began a three-day trek across some states of the federation on Sunday to demand the release of their leader, Ibraheem El-Zakzaky who was arrested in December 2015. According to the army, some of his members allegedly attacked the convoy of the country’s Chief of Army Staff, Tukur Buratai,

El-Zakzaky is the head of Nigeria’s Islamic Movement, a movement that he founded in the late 1970s, when he was a student at Ahmadu Bello University, and began propagating Shia Islam around 1979, at the time of the Iranian revolution—which saw Iran’s monarchy overthrown and replaced with an Islamic republic under Ayatollah Khomeini. Zakzaky believed that the establishment of a government along similar religious lines in Nigeria would be feasible. He has been detained several times due to accusations of civil disobedience or recalcitrance under military regimes in Nigeria during the 1980s and 1990s.

Most of the Muslims in the country are predominantly Sunni, but Zakzaky has attracted increasing numbers of followers to Shiite Islam. Since his arrest, his followers had staged different demonstrations to demand the release of their leader, but more than often, such displays had ended up in confrontations with the government security forces.

Following the recent confrontations between the group and security forces, the army had defended itself against widespread criticisms for shooting the protesting members, claiming that the move was informed by the fact that members of the group tried to confront some of its officials, adding that they were also armed.

“They met the soldiers in the call of their duty, and the soldiers tried to defend themselves,” The Guardian had quoted army spokesman John Agim as saying.

The group, according to local sources however denied army’s allegations that its members were armed and that they tried confronting security officials violently.

“Yes, there has been a renewed attack on our members. I can confirm that five of us were killed. They have taken four of the dead bodies away, and one of them is still here with us,” the group’s spokesman, Abdullahi Musa told local sources.

He had added: “We were headed for the Unity Fountain when we met some members of the guard brigade at the Nicon junction. We retreated and took the Ademola Adetokumbo Road, but we were stopped again at Abia House. Then we tried to follow the back of the Ministry of Justice area, but they came again and started using tear gas and shooting at us.”

Over 40 protesters were reportedly killed while staging the demonstration in Abuja and the neighboring Nassawara State, also in the northern part of the country in the clash that ensued on Saturday and Monday, according to Amnesty International. The army, however, denied the claim. The Financial Times had on Monday quoted the military as saying, “three protesters had been killed while four soldiers were wounded in what it said was an ‘attack’ by ‘massive numbers’ of the sect,”

Observers have warned that the Nigerian government’s continued mishandling of the issue will likely backfire in the future. An Abuja Division of the Federal High Court had in December 2016 ordered the release of the leader El-Zakzaky, but the government had flouted the directive, keeping him in custody.

The situation is a typical reflection of George Santayana’s timeless warning: “Those who cannot learn from history are doomed to repeat it.” This given that similar scenario surrounded the emergence of the deadly Boko Haram group, which has continuously unleashed attacks on people in the Northern part of the country, leaving many dead.

Boko Haram was founded by Mohammed Yusuf in 2002 in a remote part of Yobe State in the northern part of the country. At inception, the group’s activities were mostly non-violent and were majorly tied to “purify Islam in northern Nigeria.” But it soon became a violent group following the execution of its leader in 2009. Members of the group, fueled by revenge had continually engaged security forces in battles with no end in sight, led by a new leader Abubakar Shekau.

From March 2015 to August 2016, the group was aligned with the Islamic State of Iraq and the Levant. Since the insurgency started in 2009, Boko Haram has killed tens of thousands and displaced 2.3 million from their homeland and was ranked as the world’s deadliest terror group by the Global Terrorism Index in 2015.

The Nigerian government had claimed on several occasions that it had defeated the group’s influence in the Northern part of the country, but the deadly sect seemed to be waxing stronger, aiming most of its recent attacks at military barracks with sophisticated weapons.

While the nation is still grappling with the insurgent activities of Boko Haram, it risks forcing the emergence of another by the ISM. While making a case for El-Zakzaky’s release, Justice Gabriel Kolawole cited the death of the former leader of the Boko Haram leader, Yusuf, noting that, “If the applicant (El-Zakzaky) dies in custody which I do not pray for, it could result in many needless deaths.”

The Nigerian security forces’ adoption of Trump’s “consider rocks as riffles” approach to containing demonstrations staged by the El-Zakzaky followers may soon snowball into another major security crisis unless severe measures are taken. And there are many reasons government should rescind its decision to continually clampdown on the protesting members.

The ICG cited a United Nations official who said Boko Haram insurgency, killed “over 200” people in the first six months of the year, comparing it with 1,300 deaths from clashes between farmers and herdsmen. The report read: “The federal government has taken welcome but insufficient steps to halt the killings. Now claiming about six times more civilian lives than the Boko Haram insurgency, the conflict poses a grave threat to the country’s stability and unity, and it could affect the 2019 general elections.”

The financial demands of maintaining tranquility in the wake of these insecurity threats are enormous. Between 2011-2015 alone, for instance, Nigeria spent an N4.62 trillion on National Security, with the security sector gulping the highest chunk of the country’s expenditures. Another worrying report titled ‘Camouflaged Cash’ by the Transparency International Defence and Security (TIDS) revealed that not less than $670 million is spent on security votes in Nigeria every year.

Also, the country risks a stunted economic and overall development with rising insecurity threats, as such situation not only scare potential investors away but also inhibits the free flow of socio-economic activities.

In his book, “Nigeria’s Security Challenges and the Crisis of Development: Towards a New Framework for Analysis,” Aliyu Mukhtar Katsina observed that lack of favorable atmosphere such as insecurity had been the bane of development of Nigeria and other developing countries.

According to him, “The quest for stability and development is, without doubt, the Holy Grail for many third world countries; a never-ending, tedious, yet elusive, search for that condition under which these countries would be able to develop institutions and structures with the capacity to ensure economic growth, equitable distribution of national wealth, political stability and accountability.”

Amnesty International Nigeria had heavily condemned the Nigerian army’s approach to the issue, contending that such was against human rights. It claimed that some victims suffered multiple gunshot wounds, and were shot in the chest and head.

It’s Nigerian Director, Osai Ojigho said: “This pattern clearly shows soldiers and police approached IMN processions not to restore public order, but to kill. It seems the Nigerian military are deliberately using tactics designed to kill when dealing with IMN gatherings. Many of these shootings clearly amount to extrajudicial executions.”

The US Government had in a statement issued by the Information Office, Public Affairs Section, Embassy of the United States of America expressed concern over the rate of killings caused by the crisis, urging President Muhammadu Buhari government to conduct a thorough investigation into the incident and take appropriate action.

The statement read: “The United States Embassy is concerned by the deaths resulting from clashes between Nigerian security forces and members of the Islamic Movement of Nigeria in areas surrounding Abuja.

“We urge Government of Nigeria authorities to conduct a thorough investigation of the events and to take appropriate action to hold accountable those responsible for violations of Nigerian law. We urge restraint on all sides.”