Nigeria: Why Oshiomole’s Antics May Cost APC In 2019 Polls 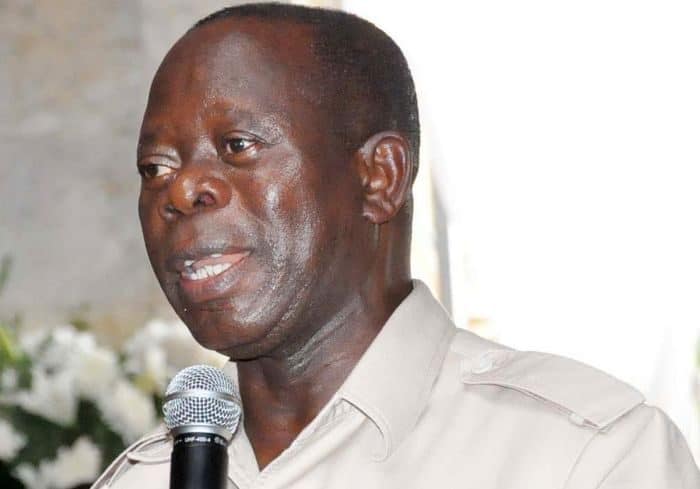 Barely few months to Nigeria’s crucial 2019 general elections, the country’s ruling party- the All Progressives Congress (APC), led by Adams Oshiomole is enmeshed in fresh crisis over the outcome of its primaries in some states across the country- a move that could greatly affect the party’s chances at the polls.

A crisis is brewing within Nigeria’s ruling party- the All Progressives Congress (APC). The National Chairman of the party, Adams Oshiomole was reportedly grilled by operatives of the Department of State Services, (DSS) recently for nine hours after some aggrieved members of the party had alleged that he received bribes during the party’s primary elections across the country.

The development, yet to be officially confirmed by APC, is an indication that these are not the best of times for Nigeria’s ruling party. The ongoing crisis among members of the party kickstarted shortly after the conduct of its primaries across the federation.

Some governors from the party such as Rochas Okorocha of Imo State in the South-Eastern part of the country, his counterpart from Ogun State, in the South-West, Ibikunle Amosun and others who are reportedly rankled by the way Oshiomole handled the primaries, CARACAL REPORTS gathered, are plotting his removal as national chairman of the party.

Some of the governors were angered by Oshiomole’s alleged stifling of plans to get the gubernatorial tickets of the party for their preferred candidates. In Imo, the APC favored the governorship candidacy of Hope Uzodimma, a senator representing Imo west, over Uche Nwosu, son-in-law of the current governor, Okorocha.

Ibikunle Amosun, Ogun governor, fell out with the party’s national working committee (NWC) after it chose Dapo Abiodun as the state’s gubernatorial candidate. Abiodun Akinlade is Amosun’s preferred candidate. In Zamfara, the Independent National Electoral Commission (INEC) said the party will not participate in the 2019 polls because it could not successfully conclude its primary before the deadline.

Governor Okorocha for instance, had while addressing State House Correspondents in Abuja shortly after meeting with President Muhammadu Buhari on Thursday accused the Party Chairman of plunging the APC into disaster since he assumed leadership of the party.

“Well, APC will not disintegrate for as long as the person, Muhammadu Buhari, is still the President of the Federal Republic of Nigeria, and remains the leader of this party. So we cannot give that credit to the chairman. He cannot disintegrate this party, the party is still intact, just that many people are hurt. Since his inception and after this primaries, we are losing almost five million voters because of anger, protest everywhere and he needs to be called to order, he has to respect the rule of law, respect court orders and do the right thing – obey court orders where applicable and not turn himself into INEC,” the governor, a critic of the Oshiomole had said while responding to questions from journalists.

On his part, Governor Amosun had also accused the party’s national chairman over the outcome of the party’s primary, noting that his leadership acumen during the process was flawed.

“The least we expect of him is to abide by the rules and guidelines of the APC. Oshiomhole knows, as we know, that in the instance of the last primaries in Ogun State, he has fallen short of the minimum standards of justice, equity and fairness,” the Governor had been quoted as saying in a statement.

The National Chairman had in October raised the alarm over plots by some unnamed personalities to end his reign as the party’s chairman.

Former APC presidential aspirant under the platform of the party, Mumakai Unagha, claimed that the party’s chances of winning during next year’s elections will be slimmer with Oshiomole at the helm.

“I am worried if the party can still win in the midst of the problems we have under Comrade Adams Oshiomhole. He has to resign for the party to clinch victory in the forthcoming election,” the Delta State-born Unagha who had sought the presidential ticket of the party, said.

But responding, Chief Press Secretary to the party’s chairman, Simon Ebegbulem, had quoted Oshiomole as saying in a statement:

“The totality of Unagha’s claims, without necessarily addressing them one after the other, tallies with cooked-up narratives being sponsored by some influential stakeholders in their respective states that Comrade Oshiomhole is responsible for all the problems in the APC at the moment.

“These influential stakeholders, according to the grapevine, have begun to mobilize to pass a no-confidence vote on the leadership of Oshiomhole, having failed to impose their preferred candidates on the party in the nomination process. Comrade Oshiomhole did not become national chairman of the governing party to bring it down a notch from the pedestal of its 2015 electoral victory let alone to preside over its liquidation.”
Political observers in the country contend that the ongoing crisis within the party is inimical to its chances at the 2019 general elections, as the situation is not likely to be addressed soon. As it stands, the cracks may deepen until something drastic is done.

The party’s Chairman undoubtedly still retains the support of big-wigs within the party, such as Bola Tinubu and President Buhari. The timing of the issue, pundits observe, may weaken the ruling party’s strength ahead of a significant election next year, which will largely test its legitimacy and popularity among Nigerians since the 2015 general elections.

The current situation in the party brings to the fore the tumultuous tenure of immediate-past chairman of the party, Chief John Oyegun, who, some party members, unsatisfied by his leadership, reportedly plotted his removal.

Peoples Democratic Party, (PDP) has called on relevant bodies to ensure the APC is investigated. “If somebody has committed an infraction of the law, he should be made to face the wrath of the law, because the law is not a respecter of persons,” Secretary, Edo State chapter of the PDP, Hon. Felix Imoisili had said according to a Daily Post report.

“If in the course of the APC primaries he (Oshiomhole) did certain things that are at variance with what the law says; that is, the extant laws, he should be made to face the full wrath of the law.

“There is nobody above the law. The rule of law must be obeyed. We are not looking at his office. The position he currently occupies does not give him immunity. Nobody is bigger than the Nigerian legal system.”

Oshiomole returned to Nigeria on Friday after visiting his wife and Bola Tinubu, APC national leader, in the US and UK respectively. While addressing editors in Lagos, the country’s economic, the APC Chairman clear the air on his alleged detention by the DSS for bribery.

“It was not an arrest or detention. The conversation centered around APC primaries. The question now is whether or not it is the DSS job to interfere in a political party’s issues. And if there’s an allegation of corruption, it is the responsibility of EFCC and ICPC.”

With some APC members already skeptical of Oshiomole’s ability to lead the party to victory at the forthcoming 2019 elections, whether or not the former Governor of Edo State can weather the storm remains unknown.

However, the ongoing fractured relationship among some party members, especially with Oshiomole generally signposts doom for the ruling party some months away from next year’s general elections, with other opposition parties likely to take advantage of the cracks.