Why The World Must Avoid Another Post-Election Crisis In Madagascar 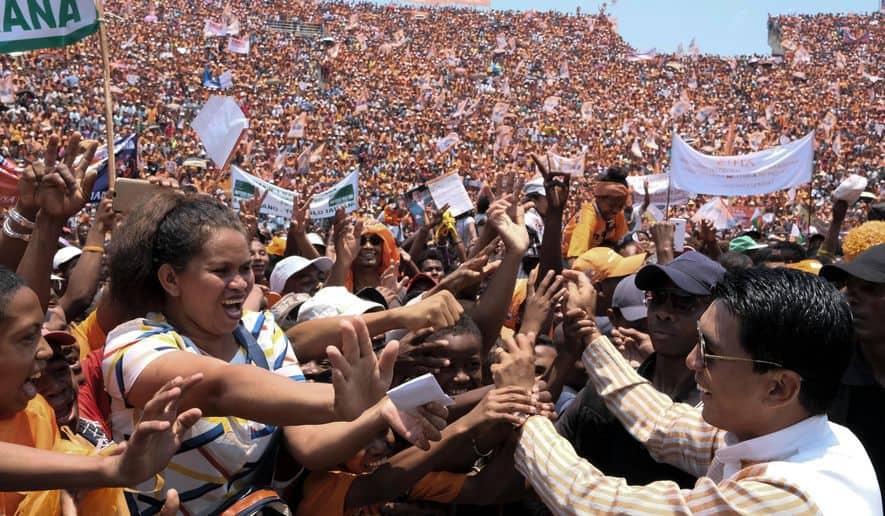 Currently grappling with threatening statistics of poverty, another post-election crisis in Madagascar which has become the country’s trademark during polls- would be suicidal.

When George Santayana quipped: “Those who cannot remember the past are condemned to repeat it,” he had situations such as forthcoming Madagascar’s run-off election in sight.

The President of Madagascar is elected using the two-round system; if no candidate receives a majority of the vote in the first round, a run-off will be held. Marc Ravalomanana and Andry Rajoelina advanced to the second round.

Therefore, both leaders, who are erstwhile presidents in the country, will slug it out in the run-off election where a winner is expected to emerge.

Incumbent President Hery Rajaonarimampianina, who resigned in September to run for re-election came third with 439,837 (8.84%) of the vote according to the election body, in a poll whose turnout was pegged at 54.3%.

“We have adopted three rules of conduct: transparency, impartiality, and independence,” CENI president Rakotomanana said as the final results were announced.

“We have not accepted any orders from anyone in this election… no favors have been given to anyone.”

While talks of the run-off election may be scooping headlines, many would be losing sleep over the post-election events than the actual results of the poll given the country’s baleful post-election history.

A post-election crisis is seemingly becoming Madagascar’s trademark, with fears hovering over the country over a possible repeat of history. The country’s violent change of power baton is largely caused by the refusal of the government of the day to hand over power, even when such has been defeated in the polls.

The country experienced recurrent post-election crises in 1972, 1991, 1996, 2002 and most recently, 2009. The latest, triggered by an unconstitutional change of power during the second mandate of President Marc Ravalomanana when a military intervention handed power to the then Rajoelina, resulted in the country’s suspension from all international fora for five years.

Amid difficult negotiations, a SADC-brokered roadmap was signed in 2011 and after President Rajoelina repeatedly postponed the date, presidential and parliamentary elections finally took place at the end of 2013 with support from the international community. As a consequence of international pressure, Ravalomanana and Rajoelina were not allowed to run, but Rajoelina’s proxy, Rajaonarimampianina, won the 2013 presidential elections.

Analysts argue that “Perhaps the main reason explaining Madagascar’s poverty and development deficit is chronical instability,” a development many feared looms large, ahead of the December 19 poll.

Already, there are ominous signs a repeat of history is likely, except the international community wades in to restore tranquillity. Some events that have so far characterized the build-up to the run-off election are making it pretty difficult to keep such thoughts at arm’s length.

The country witnessed series of protest earlier in the year towards Rajaonarimampianina’s government over an electoral law, allegedly schemed to favor him at the polls, until the fear of a military take-over in May put such demonstrations to bed.

Even more worrisome, some of the candidates seemed unsatisfied with the November 7 results, alleging electoral irregularities. All three leading candidates, out of 36, have raised allegations of fraud and malpractice by election authorities, and the result could be subject to a fierce legal battle.

Such a scenario birthed a seven-month crisis in the country at the end of 2001 and early 2002 when Ravalomanana won a disputed election, defeating Didier Ratsiraka, but the latter refused to step down. This similar issue played out in 2009, which precipitated a coup in which Rajoelina-backed army ousted Ravalomanana.

Indeed, there are many indicators another post-election crisis could be deadly to Madagascar as a nation. The Indian Ocean island has had to grapple with extreme poverty, caused largely by a struggling economy battered by years of instabilities, especially the 2009 coup.

A World Bank report listed Madagascar as one of the world’s poorest countries, with almost four in five people living in grinding poverty. At the heart of the country’s woes remains deep economic and power imbalances between regions and segments of the population, which are often triggered during elections.

“Why should the world care? Because the poverty and lack of development and fundamental human rights in Madagascar are an affront to all of us — and hidden from view or interest is a Titanic battle between those who seek power only for their own ends; and those who want to restore democracy and develop the 25-million people on the so-called Big Island,” says Peter Mann.

Peter Mann then paints a gut-wrenching picture of the present day Madagascar: The Malagasy people are poorer than ever: 92% now live on less than $2 per day; 80% go to bed hungry or thirsty every night; one in every two children suffers from malnutrition and stunting; school enrolment has fallen dramatically with more than 600,000 children who should be in school not attending classes; and infrastructure – roads, hospitals, clinics and schools — falling into disrepair. Security – both physical and food – is under threat, and Madagascar experienced epidemics of the plague during 2017 and 2018. International agency statistics show the country is going backward on every developmental index in the world. Corruption is endemic with the country at 155 of 175 countries measured by Corruption Watch.

A few days away from the country’s crucial run-off election, efforts must be geared towards avoiding another post-election crisis in Madagascar.