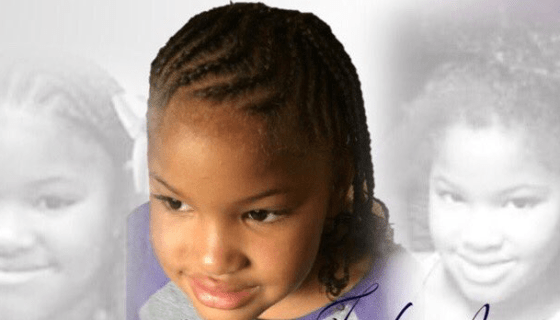 7-year-old Jazmine Barnes and her three sisters accompanied their mother to the store in their pajamas in the early morning on December 30. The sun hadn’t risen when they headed out for breakfast supplies and someone opened fire on their vehicle near the store. Jazmine’s mother, LaPorsha Washington, was shot in the arm and soon realized that Jazmine wasn’t responding to her sisters.

“When she said, Jazmine, the third time, I turned the light on in the car and turned around and looked at my baby,” Washington said. She reported that Jazmine was “leaned over on the door and blood was everywhere”, so she attempted to drive to the hospital. One of the tires was blown and she was barely conscious from her own injuries, so she was forced to wait on the side of the road with her younger daughters in the backseat and her older daughters frantically trying to flag down help.

Eventually, someone stopped and Washington said she begged, “Sir, can you just get my baby and get her to the hospital?” Jazmine had been shot in the head and died from her injuries before she could get help. As the horrific news quietly spread, people across the country began a tense struggle to make sense of a senseless crime.

In the wake of the killing, Washington and her daughters described seeing a red pickup truck driven by a white man whom they believed to be the shooter. They described both the truck and the driver in vivid detail, and the police released a sketch of the suspect and surveillance footage of the vehicle. In an interview with CNN, Jazmine’s 15-year-old  sister and her mother shared their memories of the truck pulling up to the passenger side before going around to the driver’s side of their vehicle.

Many initially suspected the attack on the family was a hate crime due to the family’s description. Washington was quoted as saying the shooter may have been motivated by seeing “a black mother with four beautiful children”.

Activist and journalist Shaun King was compelled to assist the family and offered a substantial reward for useful information. King posted and eventually deleted a mugshot of a man who matched the sketch. King said he’d received over 20 tips on him for a notable history of racism and violence, and even that man’s niece admitted she cried when she first saw the drawing and thought it could be him.

However, King soon received information which he shared with police that steered the investigation away from that suspect and in a much different direction. Authorities now believe the man the family saw in the pickup truck was on the scene, but simply a frenzied witness.

Police have made two arrests but neither of the suspects fit the description given by Jazmine’s family. Both Eric Black, Jr. and Larry Woodruffe are young African Americans, but Black has admitted that he was driving while Woodruffe shot at the family’s vehicle. They were allegedly seeking retaliation for an earlier argument and thought the family’s car belonged to someone else. Both men have been charged with capital murder.

Two other men have denied rumors of their involvement with the murder, one who claims he has faced accusations but is nothing more than a Facebook friend of Jazmine’s mother that happens to have the same first name as one of the suspects. Shaun King has been credited with passing along the information which led police to the confession and arrests but has also been accused of making false claims in requesting information about someone who matched the family’s initial description.

Though the details of the story are sometimes confusing, the truth at the end is always the same: Jazmine didn’t deserve to die. Her death was caused by reckless violence and it could have been avoided somehow.

Children and Gun Violence in America

Scientific literature shows that American children are faced with a significant risk of death by firearm injury. Studies found that more than 26,000 American children (younger than 18) were killed by gunfire between 1999 and 2016. Over 15,000 of those fatalities were homicides. Furthermore, firearm injuries are the third leading cause of death among American children 1 to 17. The U.S. is accountable for about 90 percent of firearm deaths in children under 15 among the world’s wealthiest nations.

Research shows that states with a stricter background check and child-access laws have lower rates of death by firearm injury in children. Additionally, there is moderate evidence showing “Stand Your Ground” laws, such as the one used to justify the death of 17-year-old Trayvon Martin, are counterproductive and increase the rate of firearm homicides. Therefore, a thorough review and reform of gun laws could effectively save the lives of children.

Jazmine “Jazzy Fay” Barnes was described by family as loving and innocent. She loved the color purple and singing loudly with the radio. Jazmine was one of the thousands of U.S. kids to die by firearm injury last year. Hundreds attended her funeral on January 8, where her family opted for an open casket and showcased what a bullet could do to a small body. Jazmine’s father told mourners, “God blessed me and my family with an angel. He saw fit to take her back to heaven with him. Her job was done and she did it perfectly.”