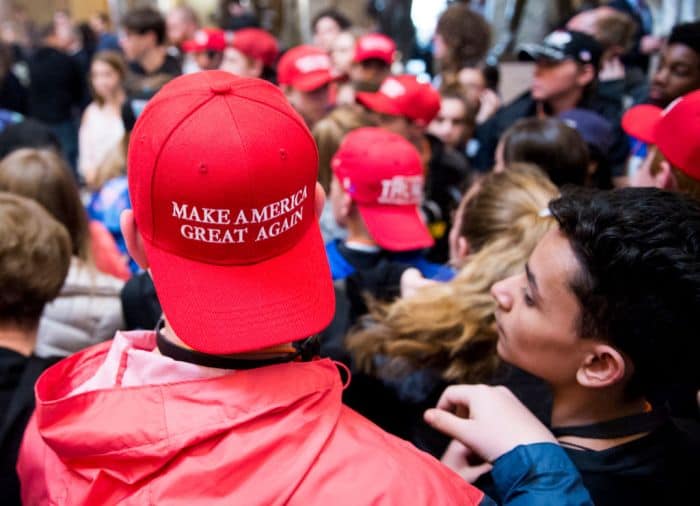 Last week by the Lincoln Memorial in the nation’s capital, a standoff between students from Covington Catholic high school and Native Americans threw America into a racial whirlwind. For a moment, it seemed like everyone had chosen a side and was ready to go to war over who was right and who was wrong. Initially, it appeared as though a Native American veteran and elder who had attended the Indigenous People’s March was swarmed and taunted by a large group of white teenage boys who had attended the March for Life, many choosing to wear the President Trump slogan “Make America Great Again” (MAGA) hat. The groups of boys came from Covington Catholic high school in Kentucky and they were instructed to gather there to await their bus home. Initially, it seemed they had gathered around the man without provocation.

Soon after, new footage emerged which showed a group of four or five Black Hebrew Israelites, a group known for frequently shouting hateful rhetoric, confronted the teens prior to the arrival of the Native American group. In response to the escalating tension between the two groups, a Native American man, Nathan Phillips, moved into the crowd with several people following and some, including Phillips, playing drums. Soon, the group of teenagers had turned their attention to Phillips and his group, with 16-year-old Nick Sandmann stepping forward to become the face of the incident. Many of the boys were clearly excitable in the engagement, jumping and yelling while some pointed and laughed at Phillips as he drummed and sang.

Sandmann’s family quickly hired Kentucky’s largest PR firm to help craft a press statement that asserted his intentions were pure. The statement alleged that Sandmann simply wanted to let Phillips know that he “was not going to become angry, intimidated or be provoked into a larger confrontation”. He claimed Phillips “locked eyes with me and approached me, coming within inches of my face” and “I am mortified that so many people have come to believe something that did not happen — that students from my school were chanting or acting in a racist fashion toward African Americans or Native Americans.” Sandmann noted he left the situation when his teacher told him to get on the bus and that he was “thankful nothing physical had occurred”. His statement left many with a big question: why didn’t his teacher or some adult chaperone try to stop the interaction sooner? Whether the boy was being antagonized or antagonizing, the adults responsible for his safety left the situation to escalate until it was time to go.

Contradictory to Sandmann’s assertions, video from the incident clearly shows the teen moving through the crowd of boys to voluntarily put himself face to face with Phillips, not vice versa. Sandmann moved close to Phillips with an unyielding stare and silent smirk that very often barely held back laughter. Furthermore, some of the boys were making the “tomahawk chop” and “war whoop” yell, which is considered “chanting or acting in a racist fashion” by many. Chase Iron Eyes, a member of the Standing Rock Sioux Tribe, explained to MSNBC how those gestures make fun of indigenous people and how doing so is a form of accepted racism in American culture.

The media was harsh towards the teens at first, and the high school even initially condemned their behavior. However, with the release of the longer video and the introduction of an expert PR firm, Sandmann and the other teens were able to score sympathy. Sandmann alone was invited for an interview on the Today Show, and then Phillips was interviewed two days later. The group of teens was informally invited to the White House, with Sandmann being singularly named in a tweet by the president for being “smeared by media”. Many maintain that the group of boys, particularly Sandmann, did nothing wrong and suggest admonishment of their behavior is just emblematic of the latest attack on white America.

Additionally, Phillips was accused of lying for a misunderstanding over his veteran status when he was identified as a Vietnam vet by some media outlets, and a previous interview with Phillips was unearthed in which he referred to himself as a Vietnam vet. Phillips served in the Marine Corps Reserve from 1972 to 1976 but was not deploy to Vietnam, which he has clarified. He has also referred to himself as a “Vietnam-times” vet.

Harassment towards other groups prior to the standoff with Phillips

The unruly incident with Phillips was not the first that the Covington teens were suspected of being involved in that day. Some of the students had engaged with the small group of Black Israelites and began to move closer to them in a growing circle, outnumbering them greatly. Eventually, they were tightly surrounding and jeering them until someone with some authority told them to back up. However, the students didn’t stay away from the men and soon had closely encircled them again.

Other videos reportedly show the students in smaller groups shouting at young women. One Twitter user reported that she and a friend had been harassed by a group of boys in MAGA hats who were yelling at them while they walked by. In another video, a white, teenage boy is seen in a crowd yelling “it’s not rape if you enjoy it” near a small group of teenage girls. that boy is not wearing a MAGA hat, though some of those around him are, and has not been confirmed to be a Covington student.

Covington Catholic High School itself is also somewhat notorious for the behavior of its students towards rival sports teams. A 2012 photo of students in blackface with exaggerated white features were reminiscent of racist minstrel characters. In the photo, an African American student from a different school is seen with at least three students in black paint around him. That student claimed in an interview that they were shouting “caramel” at him in reference to the color of his skin. Current students from the school told Fox News it is no longer allowed to wear black body paint, but insisted students only engaged in the behavior as “school spirit” before.

Where do we go from here?

Neither Sandmann’s inaccurate PR statement nor Phillips inaccurate self-description as a Vietnam vet changes what can be seen on videos of the incident. Covington Catholic High School closed at the beginning of the week due to “security concerns” related to protests and reported threats against students, including Sandmann and his family.

Sandmann did not and made clear he will not apologize through both his press statement and Today Show interview. “Unfortunately, much of the students’ behavior was understood by me and those with me as a mockery of our cultures,” Phillips previously stated. Nevertheless, Phillips said he would be willing to sit and talk with the students about “the importance of listening to and respecting diverse cultures”, and maybe that’s a good conversation for all of us to have.