Assault, Violence, Death Threat: Being A Journalist In The Era Of Trump 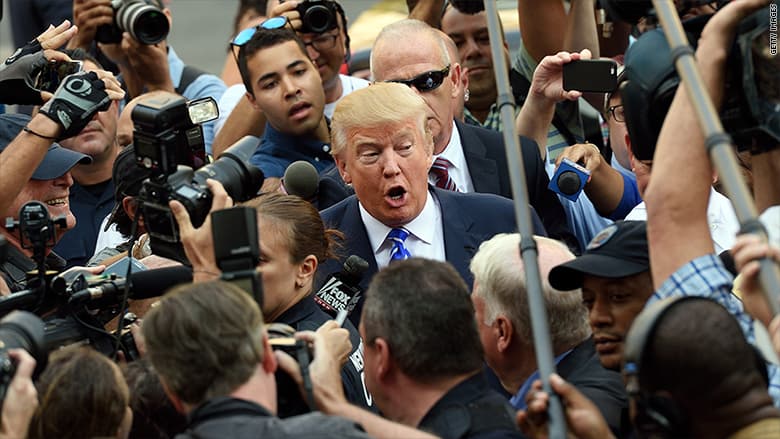 Is sharing important information with the public becoming dangerous for journalists?

The 2018 World Press Freedom Index — compiled by Reporters Without Borders (RSF) to evaluate freedom of the press in 180 countries each year — showed that animosity, threats, and physical violence towards journalists are all growing.

A December report by RSF showed that 80 journalists were killed in connection with reporting the news worldwide last year — a number which had declined over previous years — and that more than half of the victims were deliberately targeted for their work. RSF Secretary-General Christophe Deloire said that “violence against journalists…reached unprecedented levels” in 2018. “The hatred of journalists that is voiced, and sometimes very openly proclaimed, by unscrupulous politicians, religious leaders and businessmen have tragic consequences on the ground, and has been reflected in this disturbing increase in violations against journalists.”

The U.S. was one of the deadliest countries in the world for journalists last year, largely due to the mass shooting at the Capital Gazette in Maryland last June. Of the 5 victims, 4 were reporters. RSF reported that President Trump has “fostered further decline in journalists’ right to report”  by frequently referring to the press as “the enemy of the American people” and claiming any reports critical of his presidency are simply “fake news.”

Several deaths of journalists in recent years have gained global attention for involving powerful figures and strong allegations of corruption.

The Murder of Daphne Caruana Galizia

In October of 2017, a journalist who helped lead the Panama Papers investigation in Malta, Daphne Caruana Galizia, was killed in a car bomb explosion near her home. It was the 5th unsolved death by a car bomb in the country in recent years.

The files in the Panama Papers caused a stir across the globe because they illustrated how wealthy clients of a Panamanian law firm were able to launder money while dodging sanctions and avoiding taxes. The papers implicated 12 current or former heads of state and government and more than 500 banks who had registered almost over 15,000 shell companies with the firm.

The information in the papers showed that through the creation of these companies — which appear like functioning businesses to all outward appearances but are only operating to hold money — clients were able to hide funds and avoid paying taxes on them.

Caruana Galizia had largely focused her reporting on revelations from the Panama Papers for two years before her death. Prime Minister Joseph Muscat eventually sued her over allegations his wife was named as a participant in money laundering in the Panama Papers and also sued her son over a social media post.

Though 10 people were arrested in connection with the murder and three Maltese nationals were charged, it is speculated that her killing was ultimately ordered by an entity who is still unknown.

The Murder of Jan Kuciak

In February of 2018, a Slovak investigative journalist, Jan Kuciak, was shot to death inside his home along with his fiancee, Martina Kusnirova.

Kuciak had discovered corruption, tax fraud, and other links between an Italian mafia group called ‘Ndrangheta and senior government advisers who worked for the prime minister. Prime Minister Robert Fico and his cabinet resigned following demonstrations and public outcry over the murders.

Last September, 4 people were charged in connection with the killings including a suspect who allegedly paid the equivalent of $80,000 US for the hit.

The murders were the first to include a targeted killing of a journalist in the country’s history.

In October of 2018, Jamal Khashoggi was murdered inside the Consulate of Saudi Arabia in Istanbul, Turkey, where he planned to pick up paperwork necessary to marry his fiancee.

Khashoggi was a citizen of Saudi Arabia but resided and worked as a journalist in the U.S. He was highly critical of the Saudi government and royal family, and it has been widely speculated that Crown Prince Mohammed bin Salman orchestrated the murder in order to silence Khashoggi.

The Washington Post reported in October that intercepted communications indicated the crown prince ordered Khashoggi to be detained and returned to Saudi Arabia. Then, the Turkish government told U.S. officials that it had recordings from inside the consulate that proved Khashoggi was killed there.

In November, the CIA concluded that Salman had in fact ordered Khashoggi’s murder, according to a report in the Washington Post. This conclusion was based on evidence that included a phone call from Salman’s brother — who is the Saudi ambassador to the US — to assure Khashoggi it was safe to go to the consulate for his documents.

The U.S. Senate passed a resolution in December naming Salman responsible for Khashoggi’s murder. Earlier this month, President Trump declined a bipartisan request from Senators to further investigate and report on the killing and has stood by denials from Salman and Saudi Arabia.

A murder trial is currently being held in Saudi Arabia and 11 people have been charged in relation to Khashoggi’s death. The prosecutor previously shared the conclusion of investigators that an intelligence officer ordered the murder by lethal injection and that the Saudi crown prince was uninvolved.

The body of Rafael Murúa Manríquez, the director of a community radio station, was found dumped alongside a roadway in Mexico in January.

The victim had been in a protection program for at-risk journalists since 2017 after he had allegedly received threats focused on his reporting from the member of a criminal gang.

In November 2018, Murúa shared in a blog post that he had received death threats from an official in the municipal government of a town in Baja California Sur for sharing his disapproval of the mayor’s security policies.

Investigative journalist Ahmed Hussein-Suale Divela was shot to death in Ghana, also in January. Witnesses reported two killers waiting for hours before killing Divela and escaping on a motorcycle.

Last May, a member of parliament encouraged violence against Divela on national television for his involvement in investigative reporting on corruption in soccer in the country. After these comments, Divela reportedly believed that powerful people were trying to kill him.